The Psychology Of Mean People And How To Deal With Them 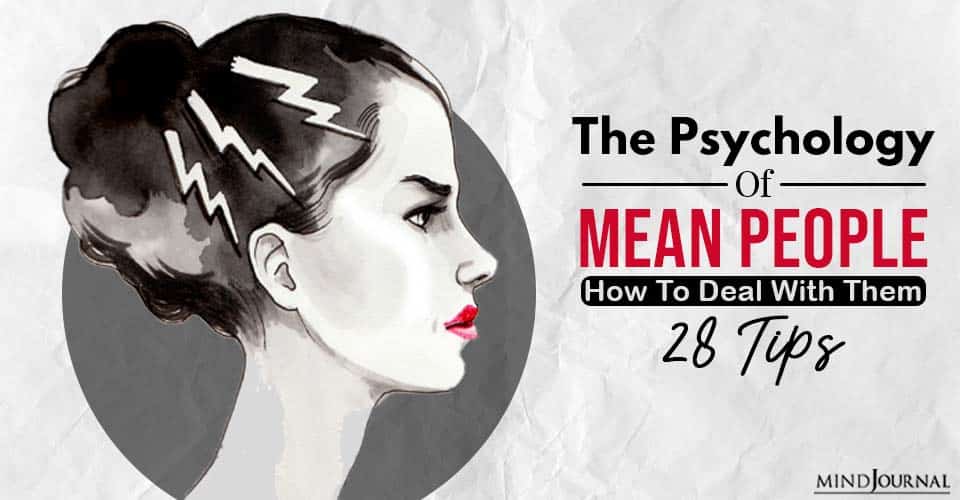 How to Deal with the mean people in your life? Mean people are a dime a dozen. The world has a lot of toxic people who are hellbent on spreading negativity and bring out the worst in us. They have no qualms about hating you, insulting you, do bad things to you, or at least wish ill for you.

Personally, I have encountered more mean people in my life than I would like to remember and most of the time they tick me off. I respond either by acting mean with them or I simply move away. But it’s not always as simple as that.

These toxic individuals can be very persistent, cruel, malicious and hateful and they can very well ruin our daily life. They can be our coworkers, family members, neighbors, random strangers or simply an online troll.

The negative attitude of difficult people can be very contagious and it can easily affect our mental and emotional well being without us even realizing it. Trying to reason with them is a futile attempt as they deliberately act mean which can be very maddening, frustrating and even terrifying at times. The fact is you can never reason or talk rationally with an unreasonably toxic person.

Why are people mean?

“You do not wake up one morning a bad person. It happens by a thousand tiny surrenders of self-respect to self-interest.” – Robert Brault

Mean people are haters, bullies and highly negative. But why are they like this? Why do they deliberately impact our mindset more than they need to with their meanness? Most difficult and mean people are excessively consumed by jealousy, hatred, and bitterness and it often leaks out in their interactions with others. They often feel happy when something bad happens to others and will usually find faults when you manage to achieve something they haven’t.

So why are they like this? Well, some people are just born like that. But there is another more understandable reason. Although it may sound strange, most people act mean because they are hurt. They have experienced excessive emotional pain and mental trauma at some point in their lives which crushed their spirit.

It could be their parents, or lover, or people they trusted who hurt them when their guard was down. Now they are scared that they will never stop feeling this numbing pain inside or that it may happen again if they allow someone into their lives or act nice with others.

And all that pain has given birth to a lot of anger that cannot be contained inside any longer. So toxic people mainly react out of their impulse of anger which makes them aggressive and means.

Read How to Deal With Mean People the Smart Way

Everyone can be “mean”

But haven’t we all been hurt? Aren’t we all emotionally wounded? Then why aren’t we mean? Well, you probably are mean and you might not even realize it. The Milgram Obedience Experiment, conducted by Yale University psychologist Stanley Milgram during the 1960s, found that most people can be insensitive and mean under the right circumstances.

“The social psychology of this century reveals a major lesson: often it is not so much the kind of person a man is as the kind of situation in which he finds himself that determines how he will act.” – Stanley Milgram

According to the “obedience” study, subjects were asked to play the role of a teacher and deliver electric shocks to participants playing the role of a student every time they gave an incorrect answer.

The “teacher” was instructed by the researcher to increase the level of the shock delivered from mild to dangerous with each wrong answer. The subjects playing teacher could hear the “student” participants screaming out of agony from the other room and yet most of them chose to continue after the researcher told them to do so.

However, the subjects delivering the shocks did not know that the electric device was not actually attached to the “students” and they were not delivering real shocks. The participants playing students were confederates pretending to be shocked.