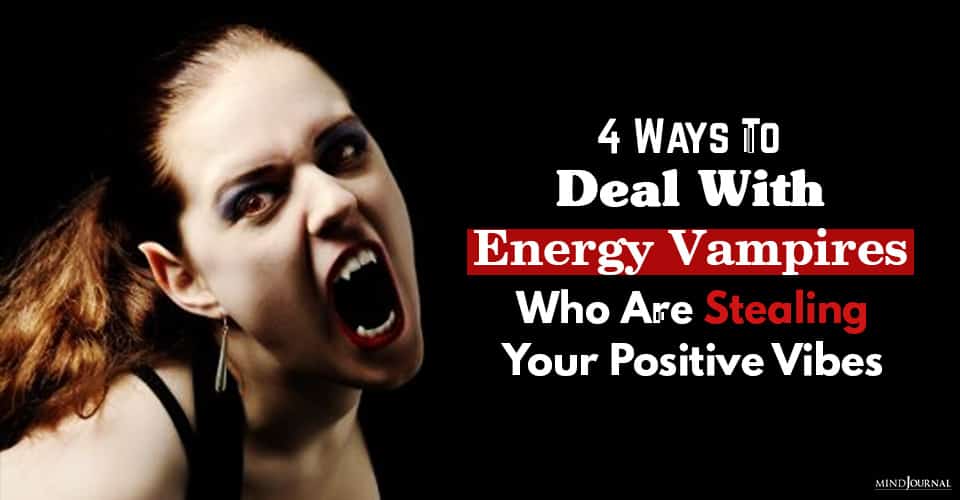 Energy vampires are emotionally immature individuals who believe that the whole world revolves around them. We can all be energy givers or takers at times. What are energy vampires and do they really exist? How to deal with toxic energy vampires?

We’ve all heard about those people that drain us, bring us down, and spread negativity just by being in the room. And you want to know how to deal with negative people who take your energy.

I believe that some people can engage in vampire-like energy behavior without even knowing it. Some people do it with conscious intent. Either way, I do believe in energy vampires and that’s because I’ve had several direct experiences.

My first experience of an energy vampire gave me a real-life physical sensation I wasn’t expecting at all.

I was at a training retreat with a mentor several years ago and we were all working hard on a particular aspect of hypnosis work. The mentor was working with a member of our group and we were all observing.

Frankly, I had no idea what was going on and the experience kind of left me with my mouth hanging open. The group teacher had never yelled before.

Then, it was my turn.

After this other person had been yelled at, it was my turn to do the same exercise with this mentor. I went through the instructions with trepidation and, for whatever reason, he didn’t shout at me.

After my exercise was complete, it was time for a break and we headed outside into a lovely sunny day for refreshments. We were in a location in nature with many trees so it was a great place to relax and refresh.

As I was chatting with another colleague, this person who had been shouted at came up and stood next to us.

I began to feel pressure on the left side of my body (he was standing to my left) and then a sense of two ‘teeth’, more like pipes, being inserted into my side. It was as physical as if he was touching me!

At the same time, this person asked me, “How did you manage to do that exercise correctly, Sarah?”

It was incredibly uncomfortable and somewhat frightening! At the time, I carried on my (interrupted) conversation with the other student, and then instinct kicked in because I literally began to feel a sucking sensation.

Phew. It worked. The participant disengaged his energy vampire ‘pipes’ (or whatever the heck they were) and walked off to another group.

It’s definitely an eye-opener when this happens for the first time.

I have to say, I believe my approach to the above situation was fairly effective, if not particularly elegant!

There’s a lot of talk of ‘shielding’ negative energy in spiritual circles. In my case, I believe what happened is that I re-established my boundaries in a hurry once I realized they were being breached.

Later, I talked to my mentor about it — I remember he chuckled because my eyes were like saucers — and he explained that I had just reached another level of awareness and sensitivity and that it was time to find ways to honor those abilities.

I do remember not being able to eat chicken for at least 6 months after that experience, either. Meeting an energy vampire through a direct energy exchange shifted my energy, too.

We can all be energy givers or takers at times.

Do your best to stay out of judgment about being an energy vampire. It’s important to understand that when someone emits a lot of energy — or ‘chi’ — we are attracted to that.

Read 12 Plants That Can Create Positive Energy in Your Home

Just take a moment to think about your favorite music idol or television actor. What happens when you watch them on television or even meet them in person at a concert or publicity event?

If you’ve been in this position, have you felt your energy reaching out to have some of whatever they have?

Star quality is powerful and attractive and many big stars have a huge stage presence. Due to their gifts, they can expand their energy and connect with their audience, making a big stadium event feel very personal.

So we all reach out with our energy sometimes.

What do you do when your energy is being taken without your permission by negative people with vampire-like abilities?

After all, you didn’t ask for this. Letting an energy vampire take from you (once you are aware of it) is just the same energetically as someone stealing your purse. And nobody likes that!

Read What Is Emotional Burnout And Ways To Replenish Your Energy

If you are with someone who makes you feel drained, here are 4 things you need to do to regain your energetic balance.

1. Find some way to re-establish your boundaries

Use conversation, space, or energy to make sure you are not feeling crowded or invaded. And saying something in your head will often work!

If you can leave, then do so. If that is not possible, find some way to break contact, even breaking eye contact will help.

2. Visualizing something sacred between you and the person concerned may break the contact also

Odd as it sounds, it really works. When I had a guy ogling me while waiting for fast food in a line, I imagined Archangel Michael between him and me.

He left almost as soon as I did that. I’m pretty proud of that one!

Read Emotional Vampires: How To Identify And Protect Yourself From Them

3. Figure out what the energy vampire is trying to get from you

At the training retreat, what the person was after was knowledge — and through osmosis rather than learning it for himself.

Knowing what is being drained can often help you figure out a way to stop the leakage. And knowledge by osmosis never works unless it’s with full agreement, in the case of a mentoring arrangement between two people, for example.

4. When you can remove yourself from the situation, check if you need to clear yourself

This will give you space and time to figure out what is going on and get centered and grounded.

When you become more conscious and aware of the energy dynamics between yourself and others, you will realize that energetic give and take goes on all the time.

The real growth comes when you can learn to sense what is going on in the present moment and then decide what you want to do about it. We can all be givers and takers sometimes.

Are you ready to deal with toxic energy vampires?