Abuse The Abuser: Should You Give A Narcissist A Taste Of Their Own Medicine? 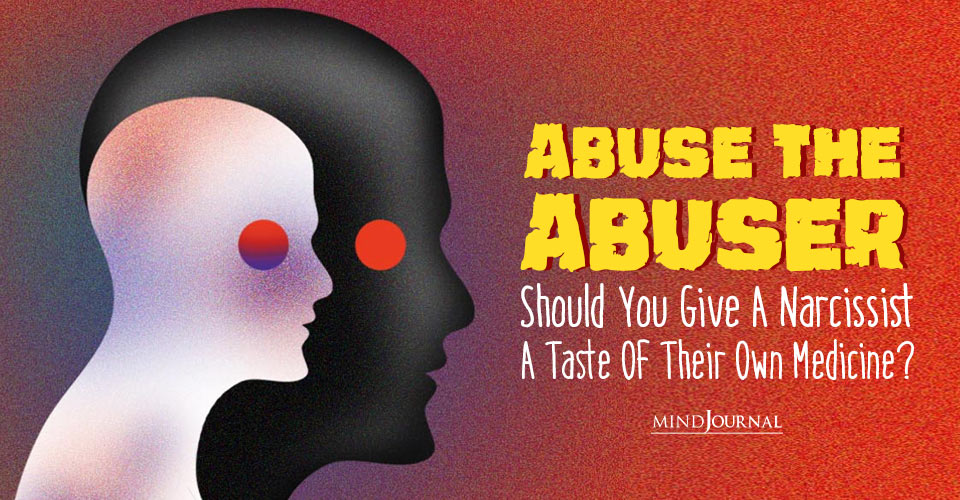 Are you tired of being abused? Tired of being screamed at, criticized, hit on your face all the time by your abuser? Have you reached the point where you say “enough is enough” and fight back? But should you abuse the abuser?

“No. Even narcissists and abusers are human beings. Moreover, you should never stoop down to their level. Simply forgive them and continue to tolerate abuse because you are an empath and that’s what empaths do.” What a load of ape shit.

If that’s the kind of answer you are expecting here, then you’re in the wrong place buddy. Self-defense is necessary and a natural reaction. Going toe to toe with your abuser and giving them a taste of their own medicine might just be exactly what you need to get your dignity and self-respect back.

Beat your abuser in their own game. Play their tricks right back on them. Use their abusive strategies to abuse them. They deserve it and you know it better than me.

Related: Are You In An Abusive Relationship And Don’t Even Know It? 4 Identifying Signs

But… things might not always go as planned and that’s where this whole idea of abusing the abuser gets complicated. And there might be a good reason why people say walking away is the best thing you can do.

Let me tell you a little story. I was in a relationship with a person who was downright abusive, manipulative and exploitative, yet I kept believing they loved me. They kept abusing me, and I kept being blind to their abusive behavior. This went on for years which broke my self-esteem and self-confidence.

Then one day I realized I have had enough. So I fought back. I did exactly what my abuser did. I used the exact same terms, same phrases, same strategies, same tactics to break them. They tried to play the victim and tried to paint me as the abuser in the relationship.

Related: What Is Emotional Abuse? 10 Signs You’re Being Emotionally Abused

So I became even more aggressive, even more manipulative and even more abusive. It’s not that they stopped abusing me, but I abused them right back. This went on for weeks and I was not stepping back cause I knew deep in my heart that they deserved it. I finally started beating them at their own game. Or so I thought.

In psychology, when you fight back abuse, it is called reactive abuse or reactionary abuse. It is a form of manipulation and gaslighting where an individual deliberately provokes another to react aggressively. When you are constantly facing violent abuse, it is normal for you to lash out and react adversely to your abuser.

However, as you start reacting, your abuser will retaliate by pretending to be the victim. This is why reactive abuse can often be threatening and dangerous.

While you may believe that abusing the abuser will empower you to rewrite the story, this will actually make things worse for you. Although everyone’s individual experiences can be different, the end result is often the same. For me, my strategy to abuse the abuser was changing me as a person.

From reactive abuse, it was turning into mutual abuse. I was enjoying the whole game of abusing my partner. And this process turned me into a sadistic, abusive narcissist, something I set out to eradicate from my life.

Related: Reactive Abuse: When They Call You Abusive for Reacting To Their Abuse

Yes, I had my revenge. I felt better. I felt more empowered. More in control… in my head. But in reality, I was just more vindictive, toxic and negative. The relationship dynamic had certainly changed – I was the abuser now, and my narcissistic partner was pretending to be the victim of abuse. But the power dynamic in the relationship never changed.

My narcissist was still controlling me. They were still manipulating me, my reactions, my behaviors and my mind. I believed I was fighting back, but I was only letting my abuser gain better control over me.

To make things worse, I felt horrible as a human being for becoming something I am inherently not – mean, vengeful and abusive. I was never a narcissist. I was never abusive. But yet, here I am now. And no matter what fancy name you may call it with, abuse is abuse.

Should you abuse the abuser then?

While you should certainly fight back abuse, set strong boundaries and stand your ground, you should not abuse the abuser. Trust me, it’s not something you would want down the line regardless of how angry you may feel right now. The thing is no matter how hard you try, you are NOT an abuser deep down in your heart.

You are a caring, loving and empathic person who just wants to give and receive love. And no matter how hard you try to change a narcissist or how desperately you want to teach them a lesson, deep down in their heart, they are abusive.

Related: 8 Mental Abuse Tactics To Watch Out For

When it comes to drama, manipulation and abuse, they have a lot more experience than you. They have more strategies, more tactics and a lot more practice. They have been abusing others all their life. You haven’t. You are not an abuser. You are just fighting for your pride and peace. A narcissist is more motivated to break you than you are to break them. No matter what you throw at them, they will have some move up their sleeve to counter it.

In fact, by choosing to abuse the abuser, you will end up pissing off your narcissist more and eventually they will retaliate with more aggression and toxicity. That’s what happened to me. In the end, I lost the battle. I was not the better abuser. I just didn’t have it in me. And I had to pay a heavy price for it. I ended up being a worse person than I was. So I walked away.

Narcissists just don’t feel the emotions that we do. When you abuse them, they don’t feel broken like we do. It doesn’t break their heart. It doesn’t break their self-esteem. They will not react to your abuse like you do to theirs. They simply don’t care. Instead they focus on how they can use this situation to their advantage and against you. The whole idea of “abuse the abuser” just doesn’t work.

Does this mean you shouldn’t fight back?

Of course, you should. Fight as hard as you can. Stand your ground. Do not give in to their abuse. But as I said earlier, fighting back and being abusive are not the same thing. When you fight back and protest against all the abuse you have been facing, you refuse to accept the toxicity. You set boundaries to tell them what is acceptable for you and what is not. But when you abuse the abuser, you become the abuser. That’s it.

While it may sound great in your mind that when the abused becomes the abuser and the abuser becomes the abused it can change the power dynamic; in reality, it doesn’t necessarily pan out that way. A narcissist will always hold the power as long as you keep getting affected by their behavior. The only way to gain the power back is by getting detached and walking away.

All your efforts to gain your self-respect and self-esteem back is a fun game for the narcissist. They will allow you to abuse them till it is advantageous for them. They love to see you snap, lose control and go bonkers. Your angry outbursts are fuel for them to play the victim.

What you don’t realize is that all the abuse you inflict on them, will come back to bite you in the ass. They will not get angry, they will not shout, they will not hit you physically, but they will break you while staying calmer than ever.

Related: How To Stop Being An Abusive Person: 10 Steps For Real, Lasting Change

How can you truly hurt a narcissist?

If abusing the abuser doesn’t work, then what does? How can you defeat the narcissist if you don’t abuse the abuser? How to fight an abuser then? By walking away. It’s that simple. If you want to hurt your narcissist, inflict some serious pain and make them cry uncontrollably, get out of the relationship.

The most effective way to retaliate against a narcissistic abuser is to simply walk out of your relationship and never look back, suggests therapist and author Elinor Greenberg, Ph.D., CGP.

“Sometimes, just when you have had enough and are ready to leave, your narcissistic mate may suddenly start to behave better toward you,” explains Elinor. They will try to change their approach and try to convince or even manipulate you to stay in the relationship.

They will beg you. Plead you. Promise you that they will change and make things better. They will say exactly what you want to hear. But these are lies. Lies meant to keep you trapped in their toxic ties so that they can continue their cycle of abuse, once they have you in their grasp again. “Unfortunately, no matter what is promised, it does not change the basic fact that without intensive therapy, the abusive pattern will repeat itself again and again,” suggests Elinor Greenberg Ph.D.

Related: How Abusers Trap You Into Staying In Abusive Relationships With Them

So the best way of dealing with abuse is just getting out of the relationship. Starve them of affection, love, admiration, care and attention. Don’t think. Don’t let fear and worries control you. Don’t be engulfed by anger or revenge. Just walk out. Else you will just keep yourself trapped in a shitstorm that will get 20 times worse than what you could expect.

Fight abuse with inner strength, determination and hope for a better future. Don’t abuse the abuser. You don’t want to be an abuser and neither do I. We want to be our most authentic selves. We don’t want to hurt others or thrive in toxicity. If you let a narcissist turn you into an abuser then you let them win. There are better ways of dealing with an abusive person that focus on building a better and happier life for you.

Don’t play the power game. Let them play their little games all alone. Being mean and going out of your way to abuse them will not lead to anything good in the long run. You will keep feeling abused, vulnerable, insecure, heartbroken and alone.

Step out of their narcissistic shadow and create your own light.

Related: 10 Things That Happen In An Emotionally Abusive Relationship

How do I know if am I abused or the abuser?

If I fight back my abuser, am I also an abuser?

Not necessarily. Fighting back abuse is a form of self-defense. When the victim fights against the abuse using aggression or abusive behaviors, it is known as reactive abuse. However, it may lead to mutual abuse where both individuals abuse each other.

How common is it for abused people to become abusers?

As domestic violence and intimate partner abuse often goes unreported, it is difficult to estimate how many people use reactive abuse to protect themselves. However, it mainly depends on the victim’s mindset, personality, relationship, partner and how much abuse the victim has experienced.