Eight Mental Abuse Tactics To Watch Out For 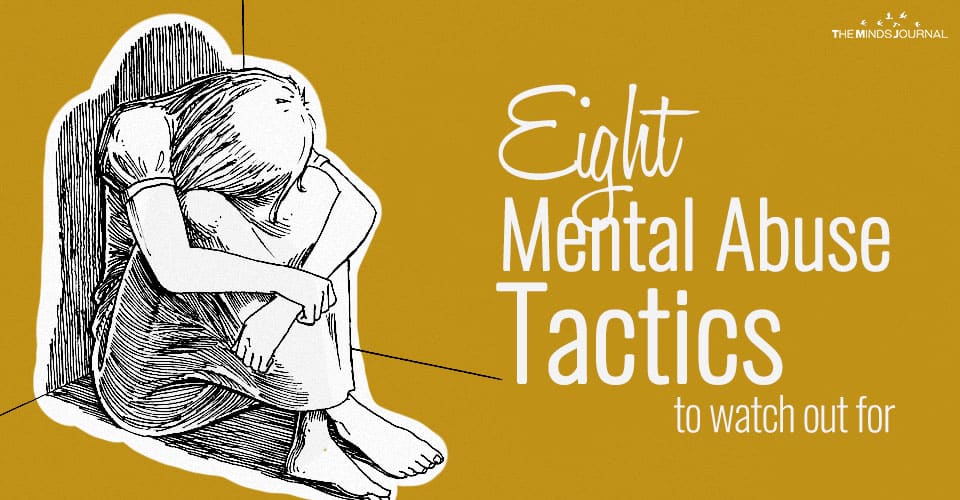 Watch out for these 8 mental abuse tactics. If you feel manipulated into doing or saying something, out of character, endure regular insults and rejection, and feel exploited by near and dear ones, you might be a victim of emotional abuse.

It could start simply with a casual comment about anything: the design of furniture, opinion about a movie, or the car needing maintenance. The remark is taken out of context by the abuser to mean that they are disapproved by the victim in some way. The victim tries to explain that it wasn’t his/her intention, but they are off on a tirade, which ends in the victim feeling helpless as if he/she is losing his/her mind.

Read 10 Manipulative Strategies Used By Narcissists To Dominate You

An abuse can come dressed in any way. Here are a few of the common abuse tactics, that are widely used. All you have to do is, Memorize these maneuvers, remain silent when they are being used, and end the conversation as soon as possible. This will keep you from being a victim of mental abuse.

Eight Mental Abuse Tactics to watch out for:

This is an intense, furious anger that comes out of nowhere, usually over nothing. It startles and shocks the victim into compliance or silence.

Mental abusers lie about the past, making their victims doubt her memory, perception, and sanity. They claim and give evidence of her past wrong behavior further causing doubt. She might even begin to question what she said a minute ago.

This is an intense stare with no feeling behind it.  It is designed to scare a victim into submission and is frequently mixed with the silent treatment.

Read 6 Diversion Tactics Used By Sociopaths, Narcissists, and Psychopaths to Manipulate You Into Silence

Some abusers punish by ignoring. Then they let their victim “off the hook” by demanding an apology even though he/she isn’t to blame. This is to modify his/her behavior. They also have a history of cutting others out of their life permanently over small things.

They dump their issues onto their victim as if she were the one doing it. For instance, narcissistic mental abusers may accuse their spouse of lying when they have lied. Or they make her feel guilty when he is really guilty. This creates confusion.

When abusers are confronted, they will twist it around to blame their victims for their actions. They will not accept responsibility for their behavior and insist that their victim apologize to them.

Read 6 Tactics Manipulators Use To Control And Confuse You

A favorite manipulation tactic is for the narcissist to make their victim fear the worst, such as abandonment, infidelity, or rejection. Then they refute it and ask her for something she normally would reply with “No.” This is a control tactic to get him/her to agree to do something he/she wouldn’t.

When all else fails, the narcissist resorts to playing the victim card. This is designed to gain sympathy and further control behavior.