10 Manipulative Strategies Used By Narcissists To Dominate You 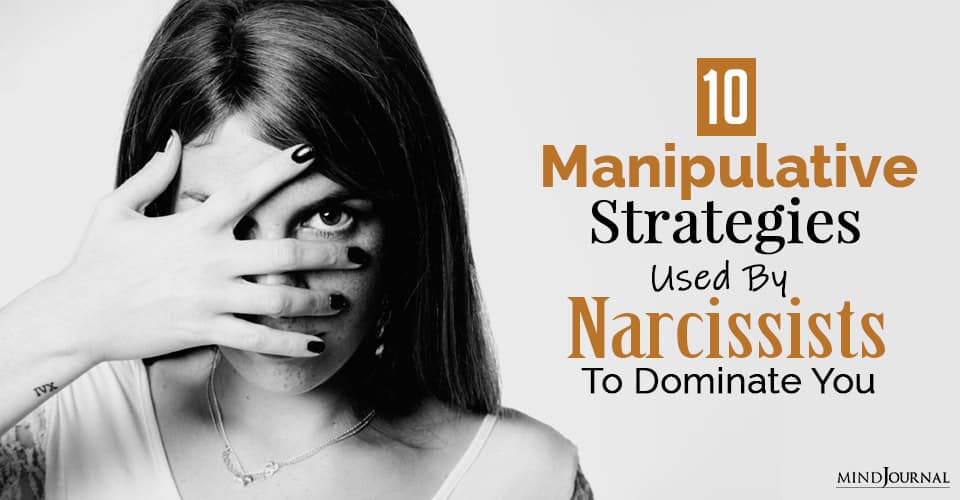 Narcissists are toxic people who use maladaptive behaviors to manipulate and exploit friends, partners, and family members. They care only about themselves and will do anything to get what they want. They may appear charming and reasonable, and that’s why it’s so easy to fall victim to the various manipulative strategies used by them to control you.

Who Is A Narcissist?

To a narcissist, they are the center of their own universe. They believe in using people to fulfill their own desires. Narcissists lack empathy for others and use overconfidence to mask their insecurities & low self-esteem.  They feel superior by demeaning others and by demanding constant attention & admiration.

Narcissists are often bullies and may cause emotional trauma to others. They make promises that they don’t keep. A narcissist will make you feel weak, unimportant, uncared & ignored affecting your self-esteem and confidence.

10 Strategies Used By Narcissists To Manipulate And Dominate You

A narcissist will start by praising you incessantly and putting you on a pedestal. Once you are addicted to their intoxicating charm, they will change their personality in the blink of an eye. Before you know it, they will start insulting you, engage in name-calling, and criticizing your opinions, beliefs, and qualities they once admired. This can seriously affect your emotional and mental health.

2. They bring in third person perspective.

By using third-party reinforcements, they validate themselves further. This method of triangulation can make you suspect your own judgments. The third person is often manipulated to support the narcissist and invalidate you. The third person is used as a weapon against you.

3. They can be very aggressive.

Narcissists can easily burst out of anger to make you surrender. They use scare tactics like verbal and physical aggression whenever triggered. They will show a complete lack of control over their behavior. They will intimidate you, threaten you, control your behavior & relationships, and make you do things they want by making you afraid.

They will use your vulnerabilities and insecurities in their favor by shaming you publicly and privately. By shaming you about your biggest insecurity, they will manipulate you until you lose your sense of worth and self-esteem. They will often say it was a joke after making you feel weak and looking for validation from them.

5. They make you feel crazy.

Crazy-making or gaslighting is an insidious manipulative strategy that makes you question your own sanity. You will feel as if you’re imagining things and lose your sense of reality. This will stop you from confronting misbehavior and abuse. Gaslighting is dangerous as there is no proof of whether they actually did or said something irrationally.

A narcissist will brainwash you to believe that they own you and you serve them without question. You will willingly do things they want, even if you’re uncomfortable. If you fail to do what they ask, they will make you feel guilty and that you’re a failure.

Narcissists take charge of everything making you feel powerless and dependent on them. You will completely rely on them to get anything done. If anything threatens their control over you and your life, they will make sure to get rid of it to gain back their dominance.