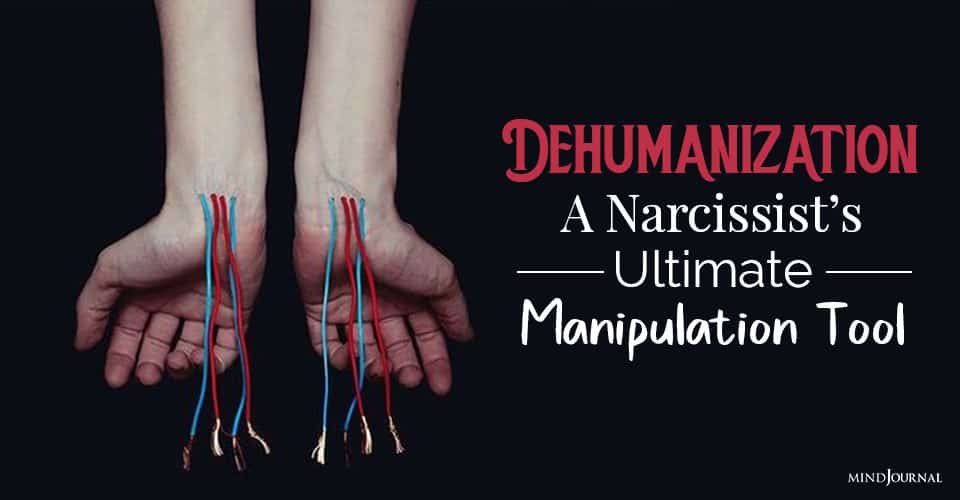 To the forces trying to crush your soul, be an impenetrable wall.

Unlike most people, narcissists don’t think on the lines of reason. The more you try to establish a common ground with them, the more they tend to disagree. Infact, the way they treat others is also pretty harsh and can never be justified by ethics and morals.

Narcissists like gaining total control over someone they are interacting with. They don’t like to be criticized or proven wrong. To safeguard their superiority complex, they devise the six most powerful tools with which they are able to subjugate others and maneuver the level of control to their own content.

The main ingredient used here is the tyrannical act of dehumanization.

Dehumanization is the process employed by a narcissist to gain absolute control over people by crushing their free will and turning them into machines that serve as a mere conduit for carrying out their sadistic desires.

Let us break down and analyze the individual steps taken by a narcissist to execute their blasphemous act of dehumanization.

Narcissists have absolutely no regard for others and the way society operates. They treat people like things, not humans. Through their egotistic lens, the world appears to be a factory, where commodities are being manufactured for narcissists to purchase and make use of them.

They don’t pay any attention to the human traits people have. They are blind and deaf to any form of human emotion and refuse to acknowledge them as fundamental elements of a healthy lifestyle. Whenever you try to interact with a narcissist, you’ll find they use you, as if they’re using an object. They want to strip off every sign of positive emotion in you and program your soul to become a machine serving their interests.

This is how they go about turning living beings into commodities and eventually throw you away when you stop living up to their expectations.

Read: Why Narcissists Act the Way They Do

Narcissists hate it when someone tries to counter their way of thinking. They function on a sort of god complex which makes them believe that the world as perceived through their lens is absolute. They think whatever they do is totally justified and is unquestionable. You cannot question their worldview, let alone change it.

So, to make sure you’re proven wrong, narcissists will try every possible way to invalidate your argument. And the funny thing is, their reasoning is not based on empirical evidence. They’re mere prejudices, not logic. Not only will they make sure that you’re proven wrong, but also that you feel guilty, miserable, and doubtful of yourself.

Narcissists gain a sort of sadistic pleasure in firing criticism, discouragement, and emotional profanities. They like seeing you suffer from post-argument guilt and low self-esteem as if you’ve misguided an entire civilization and led them to ruin by your reasoning. This very act of invalidation is an effective tool narcissists use to curb all arguments.

As mentioned earlier, narcissists love exercising control over others, it’s their favorite tool of dehumanization. The level of control is such that people are left with no choice but to run away from the severe emotional trauma that results from this malevolent act. When interacting with someone, narcissists make sure the emotions are channeled according to their sadistic desires.

They will make desperate attempts, and you can see that in their actions while interacting, to conjure up all possible negative vibes and direct them to you so that you end up feeling uneasy. They would give you instructions to follow, set principles to abide by, and determine specific timings for your emotions. They become aggressive and violent whenever you show signs of protest.

It is a sort of emotional slavery you can say. The only difference from the physical counterpart is that, here, you don’t even get paid. Infact, you have to compromise on your emotional freedom in order to satisfy their egotistic hunger.

Read: How Narcissists Gain Control Of Their Victim