8 Evasion Tactics Narcissists Use To Stop You From Questioning Them 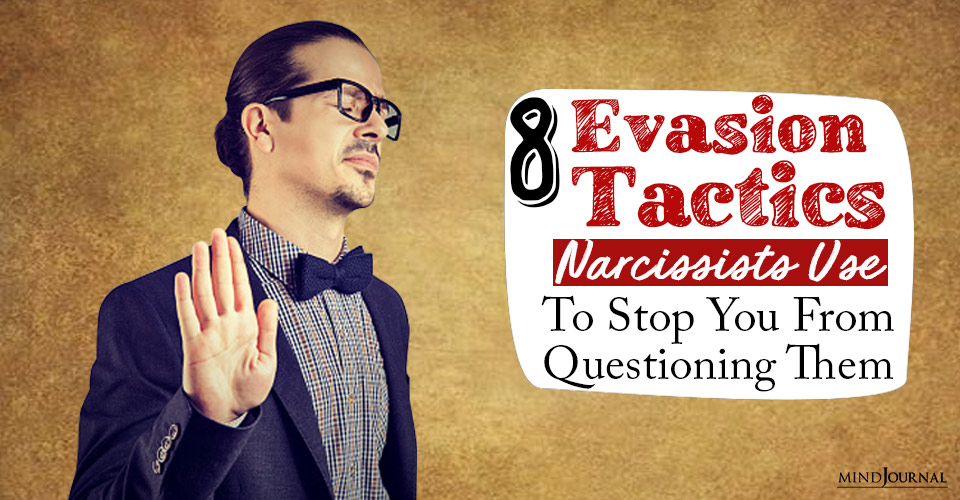 Narcissists do not like to be answerable or accountable to anyone. When they face probing questions which threaten their self-made superior status, they resort to evasion tactics. The author in this article talks about these 8 narcissist evasion tactics which are often deployed to keep others’ queries at bay.

You Are Not Allowed To Question A Narcissist

To do so is an affront to our notion of superiority and lack of accountability. Your questioning of us may be deliberate, in that you want to know why we have rolled up half-drunk at 3 am or it may be perceived by us as you questioning us in a critical fashion, even though you have not intended this, for example, you politely ask us where we have been.

We regard this as you suggesting to us that we are not allowed to do as we want and that we are somehow accountable to you.

If you engage in deliberate questioning, it is usually the case (until such time as you become fully acquainted with what we are and know how to approach dealing with us) that your methodology will be one that provides us with fuel, even though you are challenging us.

You will ask in an annoyed fashion where we have been, or express irritation when you ask why we have not moved the rubbish outside. When there is Deliberate Questioning, we do not like you challenging us but because you do so at the same time as providing fuel, our fury is not ignited.

Related: 5 Types Of Psychological Manipulation And How To Deal With Them

Instead, we recognize your challenging behavior and identify that this must be addressed and our superiority exerted but at the same time we also see that there is an opportunity for us to gain more fuel from.

You might think that since our fury has not been ignited that we could accept the fuel provided and admit that we are in the wrong, explain what has happened, and allow the matter to be resolved. A normal person may do this and you, as an empathic individual, would say your piece and with the agreement and resolution being achieved, you will draw a line under it and move on.

Such a scenario is no good to us. You have challenged us and whilst the fury has not been ignited we must still maintain our superiority and this means rejecting your challenge. This rejection also presents us with an opportunity to draw fuel from you, by denying your assertion and so forth. Thus we assert our superiority and gain fuel.

If you engage in perceived questioning this invariably ignites our fury because you will do it in a fuel-free manner so that the perceived criticism arising from your questioning wounds us, our fury ignites and we lash out in order to demand fuel to heal the wound caused by your criticism. You may have asked us a question but you did so without any agenda attached to it. We do not see it that way, your simple query of

“Oh, where have you been?” is interpreted by us as suggesting that we are not entitled to do what we want without your approval first. It is delivered without fuel and is critical, thus the wounding occurs and the ignition of fury occurs. We must strike back, once again in order to assert our superiority but also to gain fuel from you.

Accordingly, whether you raise questions of use in an emotional manner, whether you ask them in a straightforward way, whether you are demanding we explain ourselves or that your question is innocuous, you are always going to find that we respond in a manner that provokes an argument.

We do not want you questioning us, whether it is Deliberate or Perceived. You are not permitted by our rules to do so. Once you do, we must reject your challenge, assert our superiority and gain fuel (either because we see the opportunity to do so or because we have to heal the wound).

What is the result of this?