What Our Judgment Of Narcissism Reveals About Our Humanity 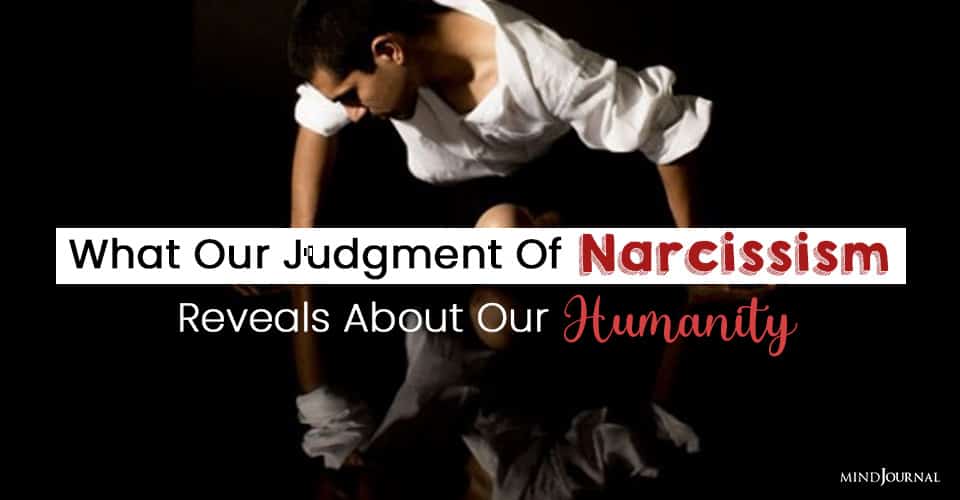 Narcissism finally has the center stage it’s always craved. Narcissism is a process by which an individual feels shame or low self-worth and compensates through being grandiose or lashing out in the face of any criticism that may trigger negative feelings. And we can’t seem to get enough of narcissism these days.

Whether it is debating Donald Trump’s personality, trying to understand the behavior of a loved one, determining how narcissism may manifest amongst business leaders, or just having some fun discussing our favorite movie or television characters, we are trying hard to figure out what narcissism is, who has it, and how it may impact us.

People who struggle with narcissism can suffer greatly. And the grandiosity and defensiveness that many people employ to defend against feelings of shame are unsuccessful leaving narcissistic individuals often consumed with feelings of self-loathing. In the most extreme cases, individuals who have Narcissistic Personality Disorder (NPD) may also suffer from co-morbid conditions such as depression, anxiety and substance dependence.

Our fascination with narcissism is understandable because of the impact they can have on the individuals around them. People who struggle with narcissism can be incredibly toxic in relationships. It can be difficult to tolerate the grandiosity that comes with narcissism, as it often feels that individuals are making themselves look impressive in contrast to and at the expense of others.

Also read Do You Have Type A Or Type B Personality? QUIZ

People who struggle with narcissism may be intentionally or unintentionally manipulative as they try to bolster a fragile sense of self. They may also experience less empathy for others as they can be preoccupied with their own needs.

In theory, the more we understand narcissism, the ways it manifests and how it can be managed, the more likely we are to improve the lives of those who struggle with it and those closest to them. And yet often, the discussion of narcissism turns from curious to critical. In the most extreme cases, we harshly judge and condemn people who struggle with narcissism.

They are portrayed as inhuman – evil, “malignant” and beyond redemption. And it is very tempting to indulge in that portrayal. And while this assessment is understandable, and may be a necessary part of the evolving discussion on narcissism, it is ultimately more harmful than helpful to everyone involved. In a sense, we are showing an extreme lack of empathy towards people we accuse of lacking in empathy.

The issue of our judgment of narcissism has been nagging me since my recent discussion with Mark Greenway of the band Napalm Death on the Hardcore Humanism Podcast regarding humanity, and how people with different political positions treat each other. Greenway identified a “crisis of humanity” that was partly based on our prioritizing political affiliations and symbols such as flags over human beings.

“This emphasis on symbols like flags is really to the detriment of human beings because it’s something that is inanimate that sometimes becomes the battering ram that we use…,” Greenway told me.

The rage and anger that many people have towards others with differing political affiliations feels familiar – eerily similar to the stigma facing people with narcissism and mental health conditions in general.

Stigma of mental health issues is damaging for several reasons.

First, people who endure mental health issues already struggle with significant emotional pain that can have severe personal, social, work and even physical health consequences. The stress of experiencing stigma in the form of ridicule and criticism only adds to the damaging effects of mental health conditions.

Second, this stress can often result in emotional avoidance whereby the individual with mental health conditions tries to suppress their experience – which tends to make their symptoms worse rather than better. Finally, individuals who experience stigma of mental health issues are less likely to seek out treatment. When considering the impact of mental health conditions on well-being and the potential for treatment to help, anything that creates a barrier to care is an important public health issue.