What Is Emotional Abuse? 10 Signs You’re Being Emotionally Abused 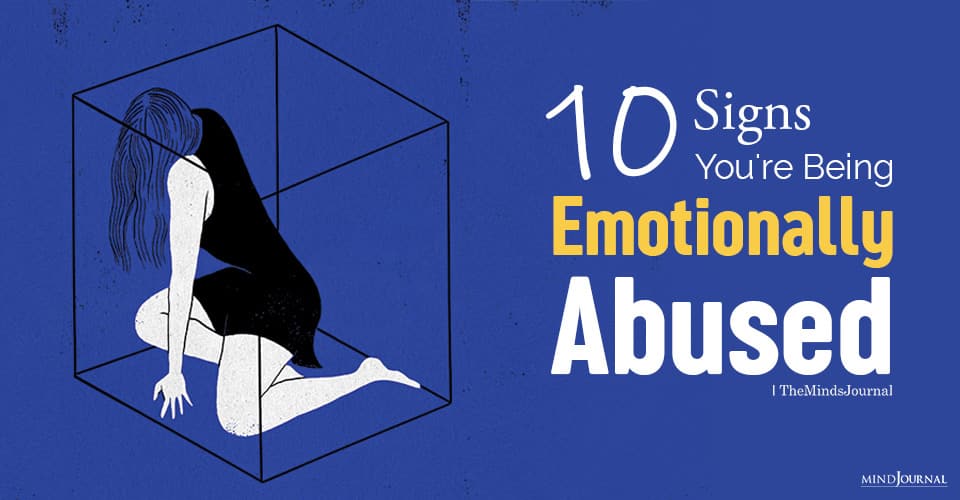 Emotional abuse can happen in any and all types of relationships. And the worst thing about it is that it rarely leaves any physical scars. Yet you end up feeling wounded, broken, and insulted. Hence, it is important for you to understand what abuse is and identify if you are in an abusive relationship or not.

Emotional abuse may be referred to as psychological violence or mental abuse, which involves subjecting someone to behavior that may result in psychological distress or trauma such as chronic depression, stress, anxiety, and post-traumatic stress disorder. Emotional abuse can be just as devastating as physical abuse, sometimes even more so. How do you know if you are being emotionally abused?

Examples Of Emotional Abuse Include:

1. Aggressive behavior towards you.

2. Controlling behavior, such as telling you what is best for you, not being allowed to have your own opinions, being told what to do, how to spend your time, who to associate with, what to wear, etc.

4. Being belittled and made to feel bad about yourself.

5. Isolating you from friends and family. (Once isolated, you become easier to control with no one to turn to but the abuser.)

Related: 7 Things That Look Like Love But Are Actually Emotional Abuse

7. Gaslighting. (Sometimes described as ‘psychological warfare’ gaslighting is an insidious process of mind games that occur over a period of time resulting in the person being gaslighted questioning their own sanity and/or reality unable to trust their own judgment.)

8. Being made to feel guilty for mistakes you didn’t make.

9. Passive-aggressive behavior (being subjected to the silent treatment for some perceived slight).

10. Financial abuse such as not being in control of your own finances. Denying access to finances will restrict your freedom and independence.

The aim of an emotional abuser is to gradually chip away at your self-esteem and independence so that, in time, you become a shell of your former self. Eventually, you may feel trapped with no way out of the relationship. You may feel that you can’t manage without this abusive person in your life. You can, and you will with the correct help and support.