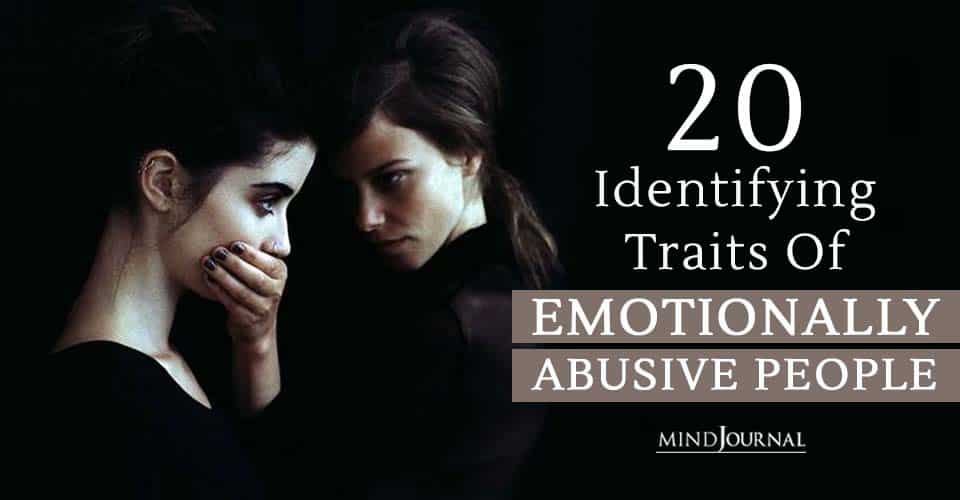 Have you ever dealt with or engaged with emotionally abusive people? If yes, then you will know how emotionally, and mentally draining the whole thing is.

There are two ways in which emotional abuse is one of the most dangerous things that can be done to a human being: firstly, it is often not recognized as abuse in the first place as it is perpetrated by people you love most. Secondly, the wounds sometimes just don’t heal.

The modus operandi of such abusive individuals appear to be eerily similar no matter the number of accounts from survivors. And the only way of escaping emotional abuse is to recognize the abuser’s method and running for your dear life.

1) Abusers do not accept responsibility for their actions.

The look on the victim’s face at the face of their absolute denial is like a major dopamine shot for these individuals.

Stone-cold denial makes the victim feel (over time) more and more inadequate and makes them stop believing their own perceptions and realities no matter how true they are.

2) Abusers live off the emotional energy they suck out of people.

The fact that their presence agitates you to be on the edge and that their approval means a lot to you hence, makes the abuser feel higher and mightier than ever.

They enjoy the feeling of leaving one raw and wounded after criticizing one for the smallest of things, just because their approval might mean something. The fault in question might not even exist.

This leaves the abused more or less tired physically and emotionally.

The appearance of caring for the abused is but a façade for the abuser. It is a trap to make the abused feel a little at ease just for them to cut them down in a far crueler way.

Do not fall for these falsities.

There will be a certain quality in these abusive individuals that makes them extremely attractive to emotionally vulnerable people. This can be their charm, them being very flirty or romantic or cheesy which makes them seem “cute”.

They might be very adept at leadership or at least it would appear that their peers appreciate their opinion or they might just be very confident: something you or the victim have never been.

It’s a moth to the flame situation.

Abusers are very unpredictable: they can be as loving as Florence Nightingale (sorry for the extremely bad analogy but you get it) one minute and become Vlad the Impaler the next.

Sadly enough, it is a part of their charm: we all like things mysterious, exotic and unknown; the Byronic anti-hero, the mysterious wardrobe to Narnia or the exotic Orient of colors, aromas and sounds unknown.

6) Abusers do not communicate easily.

Ever heard of the dark brooding hero?

When the abuser does not communicate, he is luring you with his silence to further probe into his charm while he reels the web in.

This is one of the easiest ways to recognize abuse. Besides, even if they do talk, it will invariably be an epic saga of their exploits no matter how puny they are.

7) They will throw tantrums.

The abuser will feel entitled enough to pester you by throwing unnecessary tantrums; if you retaliate, you will be branded unloving and inconsiderate.

By enabling such shows of immaturity, you will just fall deeper into the murk of abuse.

Abusers will isolate you from your emotional supports (friends, family, or peers) because they want you to be dependent on them and they don’t want their game to be exposed.

9) They all have a past they don’t talk about.

But they sure will make you think they were the victims back then and hence the silence because “it brings back the memories”.

This is part of the dividing and ruling policy. They will drive you to a point where you stop socializing just to end the conflicts at home with them.