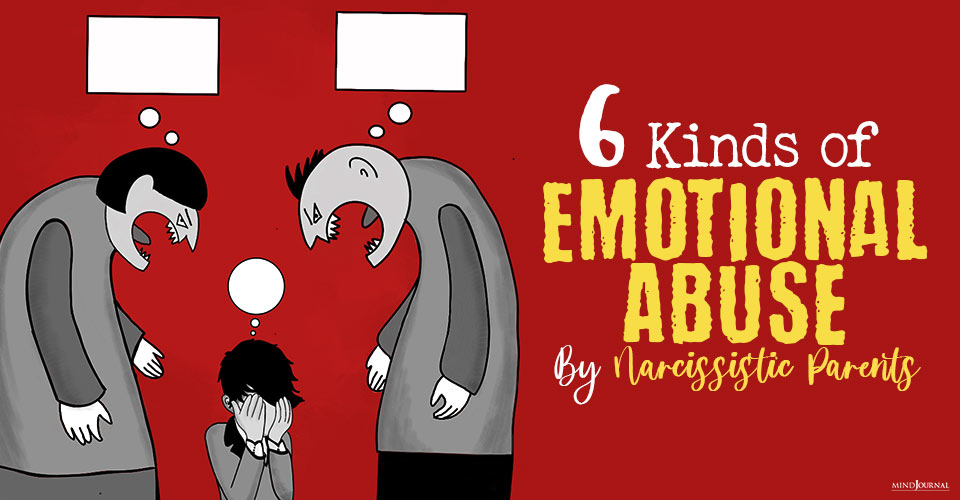 When you are on the other side of emotional abuse by parents, it can change the way you look at parental love. Having parents and a family doesn’t seem safe and loving anymore, rather it feels dark, lonely, and scary. There are different ways how parents emotionally abuse children, and knowing everything in detail can help you deal with it better.

So, how parents abuse children, and what are the different kinds of abuse by parents? Read on to know more.

6 Kinds Of Emotional Abuse By Parents

There are six well-known types of emotional abuse by narcissistic parents.

Narcissistic Parents or caregivers who display rejecting behavior toward a child will often [purposefully or unconsciously] let a child know, in a variety of ways, that he or she is unwanted. Putting down a child’s worth or belittling their needs is one form these types of emotional abuse may take.

Other examples can include telling a child to leave or worse, to get out of your face, calling him names or telling the child that he is worthless, making a child the family scapegoat, or blaming him for family/sibling problems. Refusing to talk to or holding a young child as he or she grows can also be considered abuse.

Related: 10 Signs You Had An Abusive Parent

Adults who have had few of their emotional needs met are often unable to respond to the needs of their children. They may not show attachment to the child or provide positive nurturing. They may show no interest in the child, withhold affection or even fail to recognize the child’s presence.

Many times the parent is physically there but emotionally unavailable. Failing to respond to or interact with your child, consistently, constitutes emotional and psychological abuse.

Parents who use threats, yelling, and cursing are doing serious psychological damage to their children. Singling out one child to criticize and punish or ridiculing her for displaying normal emotions is abusive. Threatening a child with harsh words, physical harm, abandonment, or in extreme cases death is unacceptable.

Even in jest, causing a child to be terrified by the use of threats and/or intimidating behavior is some of the worst emotional abuse. This includes witnessing, hearing, or knowing that violence is taking place in the home.

A 1995 telephone survey suggested that by the time a child was 2 years old, 90% of families had used one or more forms of psychological aggression in the previous 12 months.

Related: How Emotionally Immature Parents Have a Lasting Effect In A Child’s Adult Life

A parent who abuses a child through isolation may not allow the child to engage in appropriate activities with his or her peers; may keep a baby in his or her room, not exposed to stimulation, or may prevent teenagers from participating in extracurricular activities.

Requiring a child to stay in his or her room from the time school lets out until the next morning, restricting eating, or forcing a child into isolation or seclusion by keeping her away from family and friends can be destructive and considered emotional abuse depending on the circumstances and severity.

Parents who corrupt may permit children to use drugs or alcohol, watch cruel behavior toward animals, watch or look at inappropriate sexual content, or witness or participate in criminal activities such as stealing, assault, prostitution, gambling, etc.

Encouraging an underage child to do things that are illegal or harmful is abusive and should be reported.

Related: How Adult Children of Narcissists Can Begin to Heal

Exploitation can be considered manipulation or forced activity without regard for a child’s need for development. For instance, repeatedly asking an eight-year-old to be responsible for the family’s dinner is inappropriate.

Giving a child responsibilities that are far greater than a child of that age can handle or using a child for profit is abusive.

Want to know more about emotional abuse by parents? Check this video out below!

What are the signs of verbally abusive parents?

Verbally abusive parents are severely critical of their children. They often humiliate, blame, ridicule, threaten, engage in name calls, and shout at their children.

How do you deal with a verbally abusive mother?

Accept the reality and set yourself free from expectations. Identify her abusive patterns and don’t feel guilty for her behavior. Stay calm and don’t respond. Talk to someone you can trust or seek professional help. Detach yourself as much as possible.

How to confront an emotionally abusive mother?

Identify her abusive behavior and express your emotions strongly yet calmly. Seek support from your loved ones. Learn to set boundaries and be assertive. Be emotionally aloof and don’t respond to her manipulative techniques.

How do you help a friend who has emotionally abusive parents?

Make your friend feel safe and let them speak their heart out. Don’t defend the abuser or make excuses for them. Listen intently and don’t blame or shame them. Trust them and validate their emotions. Share your concern about their safety.

How do you set boundaries with verbally abusive parents?

Be clear in your mind about what kind of boundary you want to set. Be okay with disappointing your parents. Be on guard with what you share with them. Don’t engage in arguments, spend less time with them, accept their reality, and prioritize yourself.

Lori holds a B.S. in Early Childhood and Elementary Education from Temple University and a Certified Parent Instructor certificate from the Beyond Consequences Institute.View Author posts

14 thoughts on “6 Kinds of Emotional Abuse by Narcissistic Parents”