How Abusers Trap You Into Staying In Abusive Relationships With Them 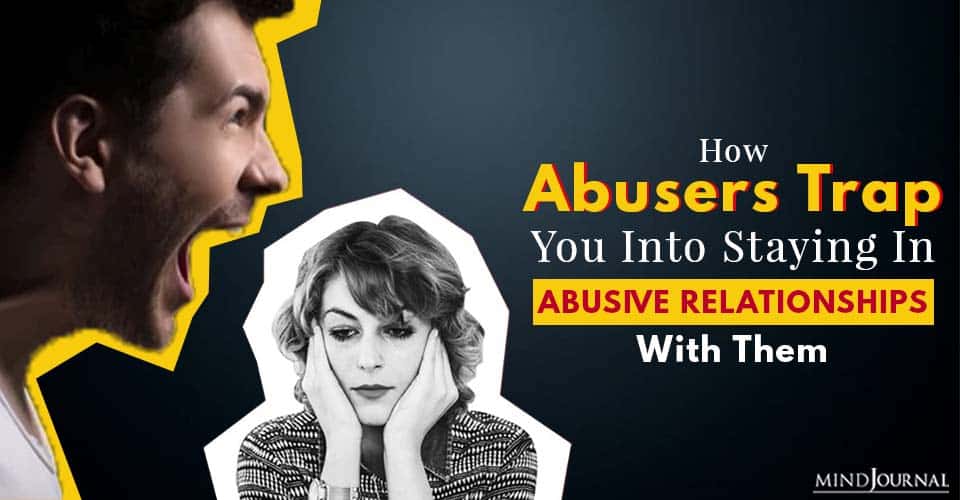 Abusive relationships stink worse than stale bread and hurt more than a continuously stabbing knife. Abusive relationships can change your life, and that too for the worse. It doesn’t just cause you pain, it also somehow convinces you that nobody except your abuser will love you, and you will never be in another relationship apart from this one. Sounds scary and lonely right?

As simple as it may sound on pen and paper, it is actually not that easy to leave abusive relationships. Only a few gather the courage to escape their abusive partners. These survivors might later stumble upon articles or books that provide them with the terms they can use in order to understand what actually was happening to them, and only then can they articulate and understand their experience for what it truly was.

Until then, they are still in a dilemma and struggling to find the right words to explain the hell they have survived.

How Abusive Relationships Trap Us Into Not Leaving

The most important thing you need to know and understand is that abuse is NOT always physical. Not all victims of abuse have physical wounds and scars to show that they have been put through hell by their partners; some have emotional and mental wounds that are hard to detect with human eyes.

The major reason behind this unawareness is how society has conditioned us to believe that abuse is always physical. In movies, we see the villains casually being violent to their partners, shouting at them aggressively and in some cases, even murdering them while being in a fit of rage. While this is indeed a form of abuse, it is only one form of abuse. There are so many more abusive tactics that abusers employ to torment their partners.

Abusive relationships begin slowly – with the occasional abusive and insulting comments. Often, these moments are brushed off by the victims, because they seem ‘harmless’ and ‘not that big of a deal’ on the surface. The reason for this is that abusers are exceptionally great pretenders and actors. They lead the victim to believe that they are everything they ever wanted in a romantic partner. Thus, the victims are tricked and blindfolded with their treacherous lies, and pretences.

Abusers are extremely intelligent and conniving people who know exactly how to set the bait and trap their victims. They know how to make someone fall head over heels in love with them. And when the abuser feels that their mask is slipping off, and the victim might see their real face, they convince their partner that it’s just a bad phase, because they are going through a tough time.

They use your empathy to trick you and before you know it, you are completely tangled up in their complex web of lies, deceit, manipulation, and of course, abuse.

If you have ever been in abusive relationships, then please know that none of it was your fault, and you did not deserve the mistreatment and abuse that came your way.

Another very damaging thing that abusive relationships do, and which keeps you trapped in the relationship, is making you believe that you are the sole reason for your partner’s anger. That it is because of one of your misdeeds that led to the rage. Thus, you stay back in the relationship to actually try and win back their affection, and ‘right your wrongs’, and ‘make it up to them’.

Abusers use this weakness to their advantage and mislead you into believing that you are the culprit, and they the victim. Once they have made you apologize to them for something you did not do, they will pose as the bigger person who has chosen to ”forgive” you, because they ”love” you. And so this vicious cycle continues, and you stay trapped, without even knowing it.