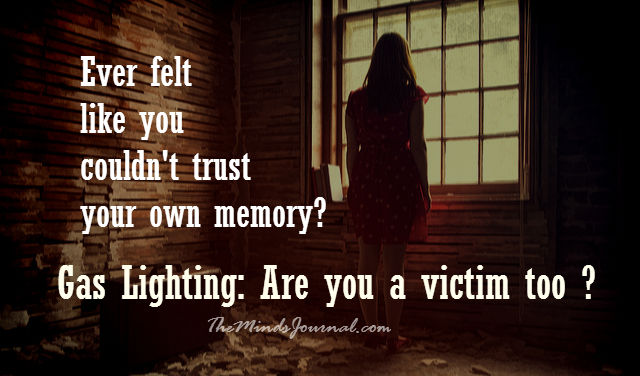 Gas Lighting – Something, everyone should know about. Are you a Victim Too ?

For almost my entire life, I felt as though I couldn’t trust my own memory.

If something happened that upset me, hurt me, or angered me, my reaction was often met with some variation of “That didn’t happen! I never said that! You’re overreacting!”

I would think to myself, “Am I making this up, am I creating this hurt, am I fabricating this anger?”

Parents and partners alike would deny my experiences, washing away painful memories as if I had simply painted them for my own amusement.

I started to think that maybe I really was “too sensitive,” that I really was overreacting, being unfair, blaming others for something that was happening inside of me.

And that’s a confusing, frustrating, and even dangerous place to be.

Because after years of being told that your memory is not reliable, you begin to depend on what others say truly happened. Nearly every time I felt angry or hurt, it was the person angering or hurting me that I believed had the “real” knowledge of what had transpired.

And even in the moments when I began to believe myself, I’d feel a pulling in my brain: “You’re hurt—no, you’re just imagining things” or “You’re angry—no, you’re just too sensitive.” This tension nearly pulled me apart.

But one day, I pushed back.

I had gotten into a huge argument with a family member. As per usual, this family member entered my home making homophobic comments as hellos, which then escalated to a full-blown argument.

It was me against Fox News and her mouth, and it ended with both of us leaving angry – and me spending Christmas with someone else’s family.

But I caught it this time. So I stood my ground – and eventually, those who told me I was the instigator admitted I had actually been the victim.

Later that night, when I called my partner to vent about what had happened (and to let them know I would be spending Christmas at their place), they stopped me mid-conversation and asked: “Do you know what gaslighting is?”

And that changed everything.

In short, gaslighting is a form of psychological abuse “in which information is twisted or spun, selectively omitted to favor the abuser, or false information is presented with the intent of making victims doubt their own memory, perception, and sanity.”

Essentially, gaslighting is a tactic used to destabilize your understanding of reality, making you constantly doubt your own experiences.

Most of the time, this tactic is used to further uneven power balances with abusive partners, making you second guess yourself when you feel as if you are being abused or attacked.

Even if a relationship seems otherwise non-abusive, gaslighting is emotional and mental violence. This process in and of itself is toxic and unhealthy, regardless of whether there are other abusive behaviors taking place within the relationship.

Furthermore, gaslighting is commonly used to discredit the lived experiences of mentally ill and neurodivergent folks, which is both abusive and ableist.

In my own personal experience, it’s been used to make me feel as though all of my anger was rooted in my mania, and that all of my reactions to people doing me harm were overreactions.

This means, for instance, that if I ever got angry or upset about the fact that members of my family habitually called me by homophobic and ableist slurs, making me unwilling to spend my time with them, I was simply having a manic break and that all of my anger was me “exploding” and being manic.

“It was me against Fox… Read more »

Thanks in support of sharing… Read more »