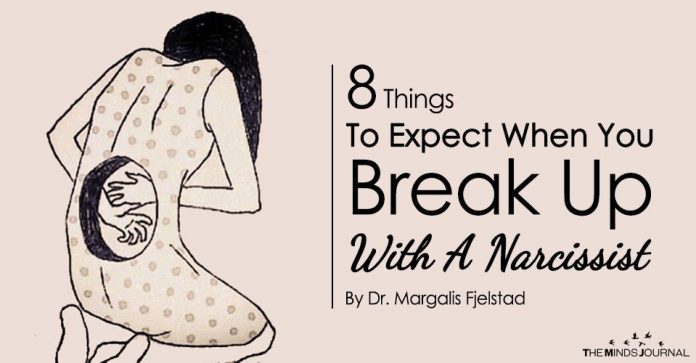 8 Things To Expect When You Break Up With A Narcissist

Caretakers are most likely to leave when the narcissist crosses a line that they finally can’t or won’t tolerate. But over the years, I have found it hard to predict when a caretaker will leave. The client whose narcissistic husband suffered a stroke and became physically abusive didn’t leave. But the client whose husband moved his pregnant girlfriend into the spare bedroom, saying she was an old friend from college down on her luck, did file for divorce. Caretaking men seem less likely to leave than women, perhaps because of the extra burden of responsibility that men culturally feel to take care of women.

When caretakers do leave, they find it is difficult to stick with their decision due to feelings of guilt or pity for the narcissist. And if the narcissist doesn’t want you to leave, (s)he’ll keep pressuring you to change your mind, often with those same old promises to change. The narcissist can make your life extremely arduous in order to keep control of you and the relationship.

Will the narcissist ever be the one to leave?

Regardless of who makes the first move to leave, here’s what you can expect at the end of a relationship with a narcissist:

(S)he says you’re too fat or too needy or too happy. You have wrecked things, destroyed the trust, ruined the best thing you ever had, crushed his love. You’re unappreciative of all he has done for you. You would be nothing without him/her. You have single-handedly destroyed all the two of you have built. You’re selfish and demanding. Overnight you have become the most despised person in the narcissist’s life.

Obviously, that is shocking, hurtful, insulting, and thoroughly unfair and wrong. When the narcissist reaches this point, (s)he will no longer listen to you or give you any consideration and may no longer be willing to even speak to you. If you apologize profusely enough and beg for reconciliation, you may get back together for a while, but things between the two of you will probably never be good again.

2. Attempts to convince you you’ve made a mistake

After months or years of being told you’re wrong and having your decisions devalued by the narcissist, you are probably prone to second-guessing yourself. And the narcissist will certainly try to convince you that you’ve made a mistake. (S)he tries charisma, coaxing, persuasion, and then intimidation, goading, and outright provocation to get back in control of the relationship.

The narcissist will say, “You just misinterpreted what I said. Of course, you should know that deep down I love you; why do I have to say it all the time? What about all the good times we’ve had together? You look at the negative too much. You don’t understand the stress I’ve been under lately. You take things too personally. You’re overreacting. You’re too emotional.”

Margalis Fjelstad, Ph.D., LMFThttp://margalistherapy.com
As a licensed marriage and family therapy for many years, I have specialized in working with clients who have a borderline or narcissistic parent or spouse. I have also been a long-time, Adjunct Faculty member with Regis University in Colorado Springs, Colorado, and at California State University in Sacramento, California, as well as the Director and Intern Supervisor for Threshold Educational and Counseling Services. Buy Books Online Also Amazon
-Adverts-