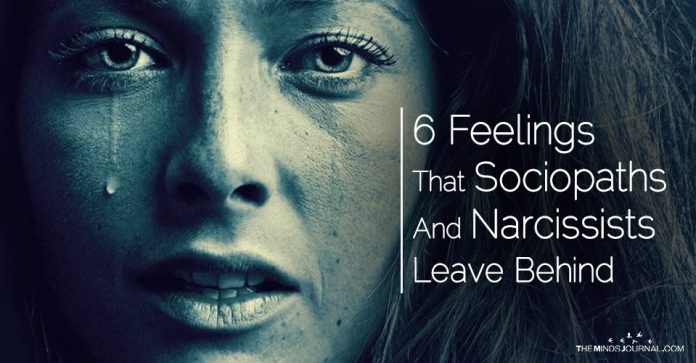 6 Feelings That Sociopaths and Narcissists Leave Behind

After a relationship with a narcissist, sociopath, or psychopath, everything is chaotic.

You will be left with an unending void that nothing will be able to fill. These people totally leave your spirits broken. But once the dust settles, you’re likely to find a bunch of lingering psychological/emotional/mental issues that will require your persistent attention to heal.

A lot of these things feel really uncomfortable and trick you into focusing on external assistance. But they are the scars left on the inside. Mental health issues take longer time to heal but once you go through the recovery process, you will be able to get back to normal life style.

Sometime the mere removal of these toxic people is the first step to reaching a healthy mental state.

After being in a poisonous relationship with a toxic person, these are the 6 feelings that you will be left with:

After being compared, triangulated, and replaced with other people, it’s completely normal to feel jealous. By default your external focus is to criticize the people you were compared with because this criticism makes you feel better. You will only focus on these people’s negative qualities and circumstances where they were left defeated.

But this, you must remember is a temporary solution to your burn inside. This constant comparison to make yourself feel greater than the other person doesn’t resolve the inner problem, which is a deep sense of rejection and inadequacy.

When we allow ourselves to break and soften, we can nurture the parts of ourselves that actually need help.

Mostly any psychological path will outline the reasons why resentment is unhealthy for the body, mind, and heart. Psychopaths behave in ways that are beyond infuriating. I think it would be bizarre not to carry resentment after an encounter with them.

However, the problem is, resentment (like envy) blocks us from love and attachment. It blocks us from seeing positivity in anything; it doesn’t allow us to be optimistic. It protects our actual internal hurt and pain with a false externally-focused energy.

Mindfulness and spirituality are effective ways to approach resentment.

Try regarding your resentment with unconditional love, soothing yourself with a kind, non-judgmental voice that says: “This is allowed”. Accept that it is understandable to feel resentment and have feelings of loathing after someone has broken your trust.

Let the negative energy within you, flow outward. Write it down on your journal or just spit it out to your close people. The more you do this, the easier it will become to release your resentment to that loving voice.

A lot of survivors publicly implode during and after their relationships. Ranting and raving about their evil ex, cyber stalking, starting websites, becoming somewhat delusional/grandiose in the quest for “exposure”. Honestly, when things calm down, you’ll probably look back and hate yourself for reacting so immaturely.

Self-forgiveness is so important for letting go of the past and allowing you to move forward. These behaviours reflecting insecurity, is a textbook example of how someone behaves when he/she is deeply damaged.

When you start to understand this, you can put down the battle axe and turn your attention inward, where it is required.