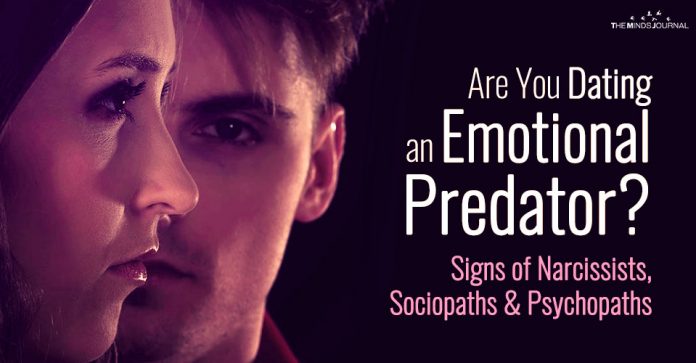 Are You Dating an Emotional Predator? – Signs of Narcissists, Sociopaths and Psychopaths

Dating an emotional predator such as a narcissist, a sociopath or psychopath is a devastating emotional roller coaster of highs and lows.

Although many abusers tend to unfold and reveal their true selves long after they’ve already reeled their victims in, there are some key signs to look out for when dating someone that can foreshadow their future behavior.

It’s important to note that emotional predators are not those who act out of their pain occasionally; these are toxic people who intentionally and consciously hunt down victims and targets to fulfill their agenda. They have a chronic pattern of manipulation, deceit combined with a lack of empathy and remorse for their actions.

What many people fail to understand is that this type of behavior is intentional, sadistic and often premeditated.

If these predators have Narcissistic Personality Disorder or Antisocial Personality Disorder, their lack of empathy is intrinsic to their disorder. The National Domestic Violence Hotline dispels the myth that an abuser’s mental illness, however, causes the abuse – because abusers do not abuse everyone – they usually choose to abuse their nearest and dearest.

Click to know more about – Narcissists, NPD and their Partners

Choice by an abuser

In these cases, abuse is caused more so by a choice by an abuser rather than their mental illness. These individuals can “switch” their masks quickly when in the public eye. That means their abuse is under their conscious control and the abuser is still accountable for continuing to abuse others and not seeking treatment.

The predatory nature of these types of individuals has actually been well-documented and researched by experts such as Dr. Robert Hare, Lundy Bancroft, Dr. Martha Stout, therapist Christine Canon de Louisville and Dr. George Simon.

Many of them have worked with these abusers and their victims as clients. All found that the abuse was deliberate and so was the manipulation. In fact, these researchers and advocates discovered that many abusers enjoyed and gained a sense of fulfillment out of manipulating others for their own gain.

The great thing about dating is that you are not committing to a relationship, so you can use this process as a way to find out more about a potential partner, and if necessary, cut ties should he or she turn out to have abusive traits without investing further in the relationship.

Are you dating an emotional predator? Here are some signs to look out for.

Abusers want to control and manipulate their victims, so they will find covert ways to maintain control over you psychologically. They can maintain this control in a diverse number of ways:

Although many people don’t realize this, excessive flattery and attention from a charming manipulator is actually a form of control because it keeps you dependent on their praise. If you find yourself being bombarded with text messages, voicemails, calls and e-mails on an hourly basis in the early stages of dating, keep a lookout for other signs.

It might seem incredible that someone is so besotted with you after just one date, but it’s actually a red flag for dubious behavior and unwarranted attachment. It’s not normal to be in contact with someone 24/7 especially if you’ve only gone on a couple of dates with them. No one has the time to “check-in” constantly with someone they’re “just” dating.

This form of contact is perfect for abusers to “check-in” with you to see what you are up to, to make sure that you are suitably “hooked” to their attention, and is a form of “idealization” which will place you on a pedestal that at first, seems irresistible. Of course, if you’re familiar with the vicious abuse cycle of narcissists which include idealization, devaluation and discard, you’ll know that you’ll soon be thrust off the pedestal.

An unhealthy response to rejection or boundaries.

Unlike dating partners who are simply excited to see you again and express their interest with polite enthusiasm. However, when you are dating an emotional predator, he or she will get considerably upset if you choose not to respond to them right away or if you resist their idealization by giving yourself necessary space.

Selfcarehavenhttp://www.selfcarehaven.wordpress.com
Shahida Arabi is a graduate of Columbia University graduate school and the author of The Smart Girl's Guide to Self-Care, a bestselling Kindle book also available in print. She is also the author of Becoming the Narcissist's Nightmare: How to Devalue and Discard the Narcissist While Supplying Yourself, which became a #1 Amazon Bestseller upon its pre-order release. She studied Psychology and English Literature as an undergraduate at NYU, where she graduated summa cum laude. Her interests include psychology, sociology, education, gender studies, and mental health advocacy. You can check out her new blog, Self-Care Haven, for topics related to mindfulness, mental health, narcissistic abuse and recovery from emotional trauma, like her page on Facebook, and subscribe to her YouTube Channel.
-Adverts-

Without strong boundaries in place (which come from speaking our truth and saying No consistently) we are an easy target to be taken advantage of.
Read more
Life Lessons

The stages of forgiveness were developed by Dr. Robert Enright. It allows us to understand the process of forgiveness and letting go of pain and anger.
Read more
wpDiscuz
3
0
Would love your thoughts, please comment.x
()
x
| Reply