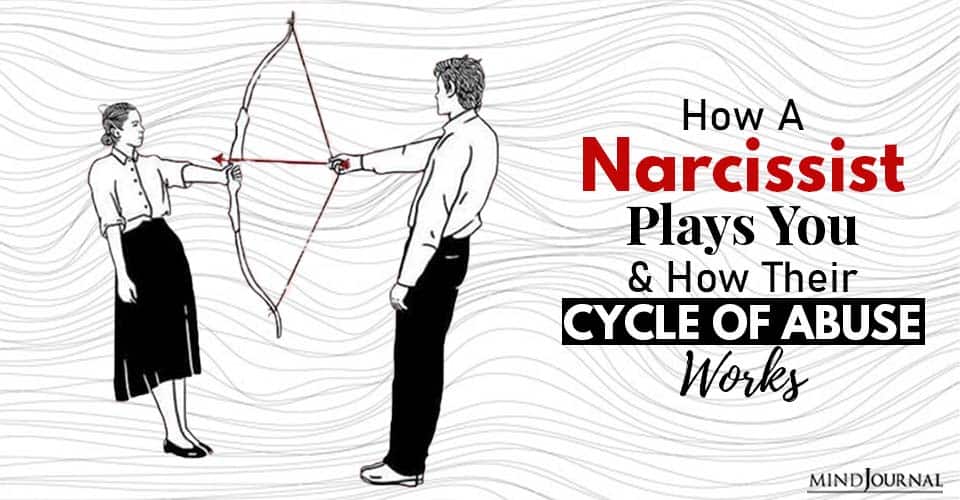 Narcissists thrive on abuse and their favorite pastime is to abuse people, be it mentally or emotionally. The only one they care about is themselves, and the only things they care about are what THEY need.

How the cycle of abuse works

A narcissist may love bomb you when you first meet them. They can be intense, all over you, telling you things that make you feel loved.

I’ve never met anyone like you before. You’re the person I’ve been waiting for.

They sweep you off your feet and promise you the world – marriage, babies, a perfect future together. Whatever it is you need to hear.

How a narcissist makes you feel

How a narcissist makes you feel at first – special wanted, great.

It’s like fireworks have gone off, it’s the best drug. You feel so high in their presence, their charisma sucks you in.

Once they’ve hooked you in, bad behavior creeps in, just little signs at first.

“How starved you must have been that my heart became a meal for your ego.” — Amanda Torroni

They may erupt in anger out of the blue. A flash of anger, where they turn on you and say something nasty.

It’s subtle at first and so quick, but it’s over with just as fast.

You think you’ve imagined it, especially when they’re now saying: I’m so sorry, that’s not me.

They’re remorseful and they may even put it down to their difficult past. They tell you how hard done by they are; unlucky in love or life.

You then feel a bit sorry for them, so you forgive them. You believe that this behavior was uncharacteristic and not them.

But, then you start to see these flashes of anger more and more and they get worse each time.

You made me angry. You shouldn’t have said that about me in front of your friends.

Whatever it is, they’ll find a reason to blame everything or everyone else, but them.

Or they might just disappear. They may go into a rage, throw things or smash their fist into a wall and then walk out the door. You won’t see them for a few days and will wonder: What have I done?

They’ll reappear and it will be as if nothing has happened. If you bring it up, you’ll be at fault for trying to create a problem in your relationship.

Why are you being so cold when I’m am so loving?

Narcissists test your boundaries early on, to see what you will accept.

Did she (or he) walk out of the relationship as a result of that behavior? No, they stuck around.

They see that as a license to reveal more of their darker side. It’s always excused away, blamed on someone else – usually you.

You start to change your behavior because you think:

Maybe I did say something wrong because they were so loving before.

You change it, hoping that by doing so you’ll affect the outcome and it won’t happen again.

But nothing works. So, you start twisting yourself in knots. You’ll do everything you can not to provoke them and to keep the peace. All you want is that loving side of them.

The pattern repeats and the abuse continues, followed by remorse and blame.

You may start to see the first signs of physical violence. A push or a shove. They may throw you hard up against a wall or pull your hair.

But, again they explain it away.

I only pushed you a little. It wasn’t as bad as you’re making out.