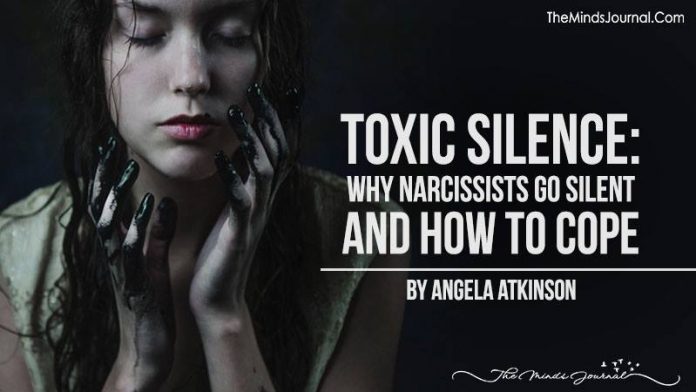 How You Survive The Narcissist’s Silent Treatment (without Losing Yourself)

How do you deal with living with a narcissist who is giving you the silent treatment?

Someone who will co-exist with you in the same house while literally ignoring you? What if that goes on for days? Weeks?

Ideally, this would be a two-word answer: no contact. But in real life, things don’t always work ideally and people sometimes need to live with narcissists – so let’s dig into this.

How to Survive the Narcissist’s Silent Treatment

Believe it or not, this is just one of the many signs of gaslighting and emotional abuse you’ll notice if you’re in a toxic relationship with an abusive narcissist.
And, in the case of a covert narcissist, you might often find yourself getting the old silent treatment – AKA the discard phase.

The first thing you have to do is to educate yourself about the situation.

I always say that knowledge is power, and the first fact you need to know about this issue is exactly why narcissists give you the silent treatment in the first place.

See, whether they recognize it consciously or not, narcissists are wired to sort of “push your buttons” in order to get what they want.

Now, you might wonder which button they’re trying to push when they just go silent, right? You might be surprised to find out that it’s not about making you crazy from lack of communication or pure boredom – rather, it’s about playing on your own worst fears.

And, I’m betting, one of your worst fears is the fear of being alone in the world with no one to help or support or just be there for you. Am I right? And I’m guessing that, if you’re currently involved (or were previously involved) with a narcissist, you’re thinking of all kinds of little things the narcissist did in order to play on your fears.

Get over your fears and get on with your life!

So, by verbally and emotionally “cutting you off,” the narcissist offers you a taste of what life might be without his charming godlike awesome self (did you detect that bit of sarcasm there??).

So, that’s the way – the narcissist ignores and belittles and devalues you because it plays on your fear of being alone. It is his hope that in enacting this silent narcissistic rage against you, he will force you into submission and into being the good little narcissistic supply he needs.

Plus, the silent treatment works particularly well on sensitive, empathic people (who are often quite attractive to narcissists), because we are wired to respond to and attempt to soothe the emotions of the people around us, especially those we love.

Okay, so how do you deal with this behavior without completely losing your mind?

If you’re staying in the relationship because you have no choice, you can play the game. But in the end, the best option is to leave and move forward.

With that being said, we all know that sometimes it’s easier said than done – and we all have our reasons for the choices we make and for why we “don’t just leave already if it’s so bad.”

So, as always, I want to say that if you are being physically abused, none of the following is relevant, and I want you to get help now – stop reading and start packing, sister.

You’re getting the silent treatment again, a lovely part of the discard phase that everyone who’s ever been in a narcissist’s path can recall. Maybe you’ve been accused of being selfish or of ignoring the narcissist’s emotional or physical needs, of being dishonest, arrogant, lazy or any number of other insulting descriptives.

(But, for the record, what’s really happening most of the time is projection—narcissists project their own inadequacies onto their victims. So as usual, it’s all about the narcissist, not about you.)

Assuming you’re going to play the game, this is what you do to cope with the silent treatment.

The next time you’re confronted with the icy, hateful silent treatment for yet another perceived infraction, I want you to come back here and read this article again. And I want you to remember that this is a game of control – the narcissist believes he can control you with his lack of communication and concern.

Angie Atkinsonhttp://queenbeeing.com/
Certified Life Coach, Author, Survivor. Discover, Understand and Overcome Narcissistic Abuse with Certified Life Coach, author and survivor Angie Atkinson, a recognized expert in narcissism in relationships and narcissistic personality disorder. As creator of the DUO Method of Healing, it's her mission to to help those who have experienced the emotional and mental devastation that comes with narcissistic abuse in these incredibly toxic relationships to (re)discover their true selves, stop the gaslighting and manipulation and move forward into their genuine desires - into a life that is exactly what they choose for themselves. As you can see when you visit the freebies page at QueenBeeing.com, Atkinson's online daily magazine, she's all about paying it forward.
-Adverts-