8 Signs You Are The Victim of an Abusive “Hoovering” Narcissist 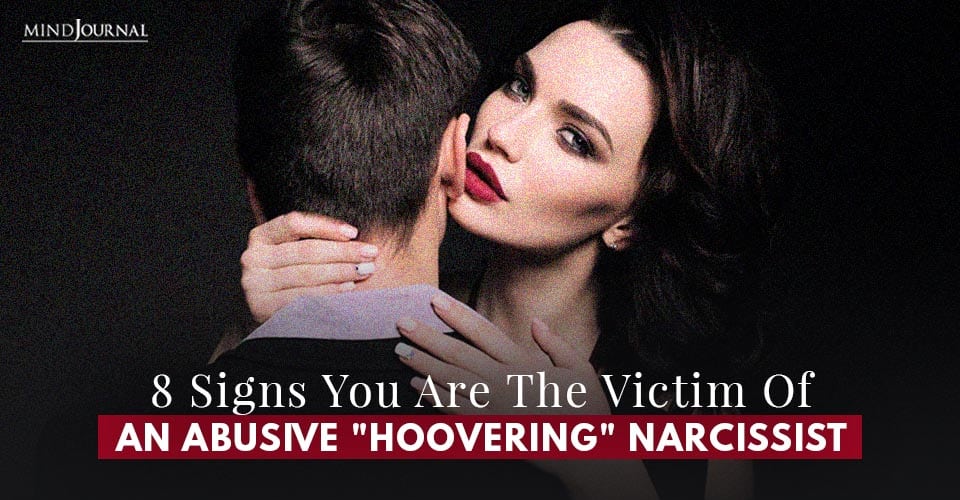 Here’re signs you’re are actually the victim of an abusive hoovering narcissist.

Your heart sinks as you read the text, “I’m not in a great place right now. I need you. Please help.”

It’s been over a year now. You’ve cut off all ties and contact with your ex, and you’ve finally gained some semblance of mental health. But this … this random text throws you completely off. As you quickly type the message with shaking fingers “What do you need help with?” and click send, your stomach drops. There is a dark feeling in the pit of your chest. It’s the ominous and foreboding feeling you sometimes get before thunderstorms and tragic news. Deep down, you know that you’ve made the wrong choice.

If you can relate to what I’ve just written, you’re likely experiencing a dangerously abusive manipulation technique known as hoovering.

Hoovering is a technique that drags you into cycles of abuse, disrupting your entire life and those around you.

In this article, you’ll learn how to prevent this abusive manipulation from fooling you.

Hoovering is an abuse tactic frequently used by people who struggle with narcissistic, borderline, antisocial, and histrionic personality disorders. Named after the Hoover vacuum cleaner, hoovering is basically a way of “sucking” a person back into an abusive relationship. Hoovering is typically done after a long period of no contact between the victim and the abuser.

Let’s take a look at what hoovering looks and feels like:

Amanda broke up with Steven six months ago and has severed all contact. But one day, out of the blue, she receives a contact request on Facebook from Steven apologizing for all of his abusive behavior and that he wants to be given a second chance because he’s still “in love” with her. Amanda’s heart beats quickly as she writes a response, truly believing that Steven has “changed.”

Related: The Secret Language of Narcissists, Sociopaths and Psychopaths: How Abusers

Ben managed to escape an emotionally abusive relationship with his partner Robert almost two years ago. When he arrived home, he finds a lavish array of flowers on his doorstep with a note that says “Happy Valentine’s Day!” and a phone number from Robert. Ben starts remembering how much affection Robert used to show him at the start of their relationship. Feeling lonely, Ben convinces himself that Robert must have matured past his paranoid and hateful behavior, and gives him a call.

Ingrid has just left Scott out of a desperate attempt to regain control of her life. After managing to find solace for a few days from his gaslighting, infidelity, and outbursts of rage, he begins appearing on her doorstep. “You’re the only one I ever loved Ingrid,” Scott whines, “I want to marry you, I only ever wanted to be with you. You’re the love of my life, my soulmate.” After experiencing this behavior for a couple of weeks, Ingrid finally snaps, and rips open the door, “Get out of my fucking life!” she screams and starts to cry. Scott pulls her into a hug and she sobs on his shoulder.