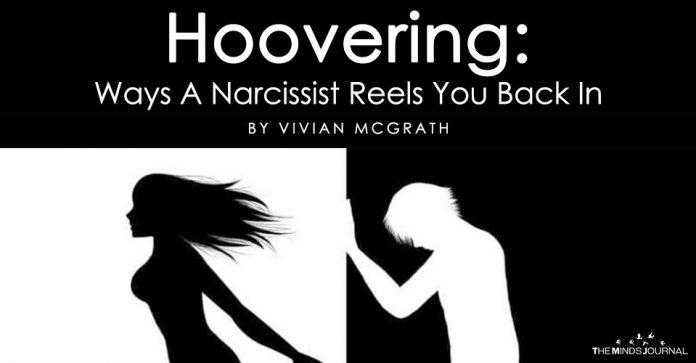 Hoovering: Ways A Narcissist Reels You Back In

Hoovering. I love that word!

I’m not talking about vacuuming the floors.

It’s such a brilliant word because it absolutely sums up what it means. It does what it says on the tin.

This usually happens after an episode of abuse. Or, when you are threatening to leave, or have recently left an abusive relationship.

The narcissist fears they’re losing control over you – it’s their greatest fear.

A narcissist has to have control over you to make themselves feel better about themselves.

The way they do this is to hoover you back in.

I’m sorry that’s not the real me

They’re so loving and attentive.  Envelope you with this positive emotion and they love-bomb you with all their might.

You get their nice side back again.  The one you first fell in love with.

You believe that maybe this time they will change. That’s the lie that makes us go back to them and stay for way too long.

It’s what we want to believe as we have this fantasy man (or woman) in our heads.  The one we hope they’ll become with our help.

Don’t listen to a narcissist when they hoover you.  It’s just a manipulative tactic.

They’ll say whatever they need to say to suck you back in.  They’ll be loving and nice only as long as it takes for them to regain control over you.

Then the cycle of abuse will return.

Hoovering can also happen when you leave an abusive relationship and try to go cold turkey and have no contact with them.

Even if you’ve cut them off, changed phone numbers, they’ll somehow find you and send you a random text.

Why are you doing this to me when I love you, have promised I’ll change and need you now more than ever?

They guilt trip you.  They want you to feel sorry for them and bad about leaving them.

It might even be after you’ve been discarded by them. Dumped in a cruel and cold way.

Narcissists do this when they no longer feel they are getting what they need from you.  Then move on to their next supply.

Someone who will let them manipulate them and won’t question or call them out on their behavior.

Quite often before they do their final discard of you, they’ve already lined up their next supply.   They dump you, then go on to a new parasitic relationship.

They’ll be with this new person parading around on social media and you’ll think:

Did they ever love me?

Maybe I was to blame for the abuse?

Because they seem so happy together.  It really hurts when they discard you and more so because they’re rubbing salt in the wound.

Then out of the blue one day, you get a text.

How are you? I miss you!

That’s the vacuum cleaner coming out.

They want to keep you dangling just enough to be plan B if this new supply/relationship doesn’t work out.

Or, it just gives them a sense of power to have control over you again. To still have you dangling there, even though they’re with someone new.

Don’t fall for the vacuum cleaner and their hoovering techniques!  Don’t let them reel you back in.

No matter what they’re saying to you when they’re hoovering you – and I know they can be the most loving, beautiful, wonderful person when they are.  DO NOT listen to what they say.

Narcissists are arch-manipulators. Don’t listen to their words, especially when their actions aren’t aligned with them. They’ll say whatever they think you want to hear and then do the opposite.

Don’t believe them when they say:

I will change this time

I promise it will never happen again

I am stunned. You literally… Read more »