What a Relationship with a Narcissist Actually Feels Like 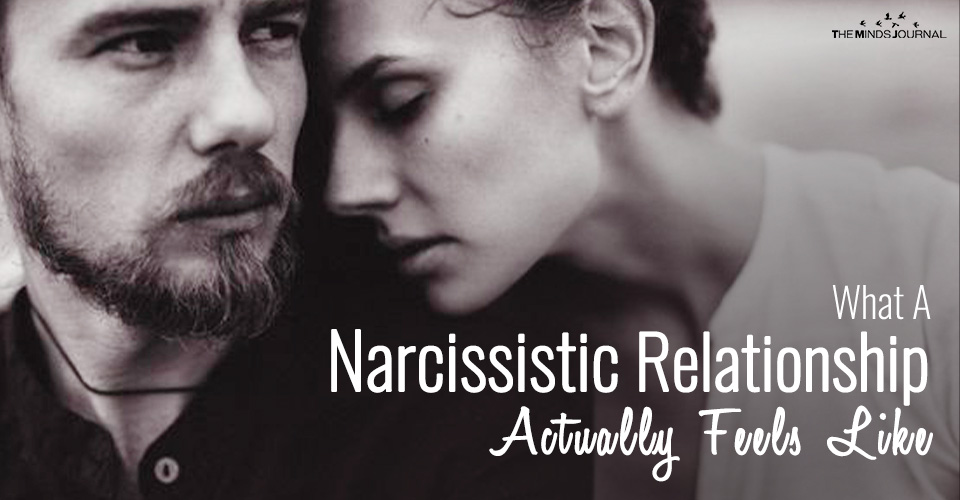 Overt, covert and malignant narcissists.

Wow! The word narcissist gets bandied about a lot these days!

When I was in an abusive relationship with my ex, I’d never even heard of the term.

It is something more recent and become a popular term. So, I thought it would be worth asking the question:

What is a narcissist?
Are you in a relationship with one?

As for malignant narcissists, forget it. I’d steer well clear of them!

Here’s a short summary of some signs you are living with or engaging with a narcissist:

1. What the narcissist needs are all that matters

A narcissist is attention-seeking.

Their opinions will always be right and everyone else is wrong.

They are intolerant of other people’s opinions or beliefs. Instead, they’ll minimize, ignore or disparage anyone else’s concerns or opinions. They’ll usually do so with a tone of contempt.

They look down on others because they are right and everybody else is wrong. It’s all about ME, ME, ME.

A narcissist thinks they know better and are superior. In conversation, it’s usually about them.

If you try and bring yourself up or turn the conversation around, they’ll quickly bring the subject back to them. It will be all about them again.

It’s me, me, me and when they want something they want it now. What they want they make sure they get.

They don’t give two hoots how you feel, because they see you as an extension of themselves.

They will walk over the top of you if they have to, to get what they want. They are the most important thing in the world.

2. Rules a narcissist sets for you, never apply to them

They can flirt with whatever girl or guy they want, but if you dare do so you’ve got another thing coming.

Narcissists set rules for you that don’t apply to them. There’s one rule for you, another for them.

Besides, they’ll ignore all rules that get in the way of them doing what they want, when they want.

But, if you dare break any of those rules they’ve set you, usually unwritten ones, they will punish you.

They test you early on to see what level of bad behavior they will accept. If you accept the blame for their actions, they know they’ve got away with it.

They’ll simply head straight towards the next boundary and try to crash it down.

Other signs of narcissism are:

4. A grandiose sense of self-importance

They exaggerate their talents and achievements.

They think they’re superior to everybody else. Even when their talents and achievements are far less than others.

They have fantasies of unlimited success, power, and brilliance. That love with them is perfect.

Narcissists are unwilling or incapable of seeing anybody else’s point of view. Or another’s opinions.

They can’t identify with the feelings of others and as a result, can be exploitative.

5. They have an inflated sense of ego and need to control others.

Narcissist feed of others. They exploit those they deem to be weaker. To make themselves feel stronger, superior and special.

Although they have a self-inflated sense of entitlement and ego, they can be charming and charismatic.

A narcissist can be persuasive and sweep you off your feet. When they’re interested in you they know how to make you feel special and wanted.

But it’s a lie. It’s not about you at all. It’s about how you make them feel.

6. They come first and that’s paramount to them. Anyone else is irrelevant.

Like Vampires, narcissists feed off you to make themselves feel good.

Once they have reeled you in. Sucked you in with their charismatic personality at the start. Then they switch to their manipulative tactics to control you.

They need total control over you to feel good about themselves. Deep down they are actually needy and lacking self-esteem.

7. Narcissists come in many forms.

They’re not just those you find in your relationships. They might be your funny and charming boss at work. Or a persuasive, yet difficult client.

They can be a friend who sucks you dry, as it’s all about them, never you.

All of the above can be manipulative. It’s about them gratifying their needs and desires, not yours.

Whilst the covert narcissist’s above behavior is external and outwardly visible, some narcissists are quieter but just as manipulative.

They share the same traits as overt narcissists, both having a grandiose sense of entitlement which belies fragile self-esteem. But the traits of the vulnerable narcissist or covert narcissist are more hidden.

They may have a quiet superiority. They’re judgemental and their mannerisms hint at condescension and disapproval.

Covert narcissists are poor listeners, as there is a withdrawn self-centredness about them.

They’re quick to judge and if they don’t deem you to be someone they need or want, they’ll block you.

An introverted narcissist can be passive-aggressive. They may also appear aloof or smug, which hides an inability to genuinely connect with others.

At the extreme end, narcissists can be dangerous.

Malignant narcissist’s mood and behavior are dependent on external factors and those around them.

They need positive feedback and can feel anger, stress, and shame if what they get back is at odds with their inflated sense of self.

They need to guard their true self at all costs, which at the heart of lies a fragile self-esteem.

Malignant narcissists have a desperate need for total control.

They have a grandiose sense of self-importance and entitlement and are intolerant of others’ opinions, particularly when they differ to theirs.

If faced with facts, they’ll lie and change their reality, rather than accept the truth. They gaslight those who confront them with it.

They have no empathy.

They do not understand the impact of their behavior on others who love them, live with them and/or work with them. Malignant narcissists can destroy families and work environments.

Everyone is left walking on eggshells around them.

They’ll confuse you. You’ll feel sorrier for them than the abuse they mete out to you.

Don’t let them fool you with their charisma and charming personalities.

Be wary of a narcissist’s need for total control and how manipulative they can be. That’s not loving.

They may convince you they love you. They may even convince themselves they feel that love for you. But it will only be for as long as you make them feel good about themselves or they are getting something in return.

They suck everyone around them dry. If they’re not getting enough of what they want, they’ll simply discard you and move on to their next supply.

The longer you stay in a relationship with a narcissist, the harder it will be to leave. Get out while you can.

Do you recognise any of what I have described above?  Are you in a narcissistic relationship?

Is a narcissist starting to manipulate and control you?  Let me know in the comments below.

Find out how to deal with narcissists and stand up to bullies here.

If you want to live boldly, overcome your fears and create the life you dream of then tap into The Power Within You – Viv’s group or VIP 1:1 mentorship program.