Relationship Patterns of A Narcissist: 8 Signs To Watch Out For 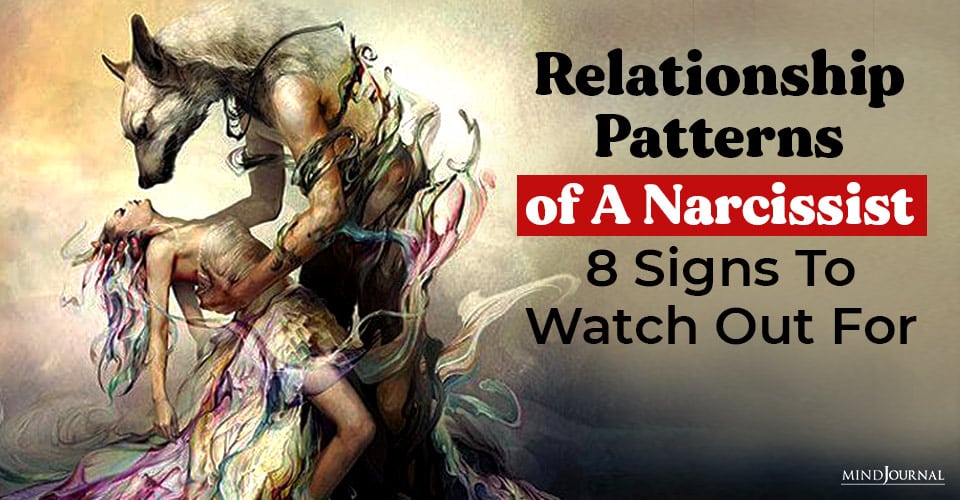 “Just because something isn’t a lie does not mean that it isn’t deceptive. A liar knows that he is a liar, but one who speaks mere portions of truth in order to deceive is a craftsman of destruction.” ― Criss Jami

If you had some kind of forewarning that you were about to enter into a relationship, that would consume you, to the point of your virtual destruction, would you still go through with it?

Unless you’re a masochist, the answer is probably no. Once you’ve been through a relationship with an emotional manipulator, it’s not something you will ever wish to repeat.

In emotionally healthy relationships you have both partners encouraging each other to stay through consistent acts of kindness, love, and respect. They are dependable, responsible, and maintain their own individuality and growth while encouraging the same for their partners.

Emotional manipulators operate on a different level. Because they themselves are emotionally damaged, they believe that they have to trick and manipulate their partners into staying with them and they do that through control. Early on a campaign of destruction in launched, meant to quash your autonomy and your self-esteem while isolating you from family and friends.

That’s why it’s important to identify these relationship patterns early. Early detection will allow you to know what you’re dealing with and to extricate yourself without investing so much time, effort, emotion, and resources. I’ve compiled a pattern of behavior used by most narcissists. When you recognize it, end it and get out as quickly as you can. Pass it on so others are aware of the patterns.

The Narcissist’s Pattern of Behaviors in Relationships

1) They appear larger than life.

There is something special and unique about them, something that stands out. Even if they don’t have much going for them, you’re convinced it’s only temporary and with your help, they could really be something. They reveal a little vulnerability, a slight character flaw, that you find incredibly appealing.

They dazzle you so much that you’re left thinking, why would a guy or girl like this want me? (They all seem to have at least one special feature that they display prominently) “the bait,”. If it’s intelligence, they astound you with their superior intellect. If it’s the beauty you’re overwhelmed that they’d pick lil’ ole you when they can have anyone they want.

What you don’t realize is that this is act one of a very well-rehearsed play.

2) They seem laser-focused on you.

In the early going, you don’t have to guess what they’re doing or thinking, because they are calling and texting you all the time. It seems as though they cannot get enough of you and you’re thinking, “Finally, here is someone that can give me the love I need and deserve.” They want to know everything about you.

Even though you may have some self-esteem issues, you really like the you that they see. They like you so much that they’ve convinced you to start liking yourself and it all feels like a dream. You’ve got butterflies, you’re fantasizing about your future together. It’s like they’ve put you on a pedestal and that liking you is the in thing to do. You are feeling really happy and hopeful for the future.

Related: What It Means When a Narcissist Says “I Love You”