Relationship Stages With A Narcissist or Borderline And Triangulation 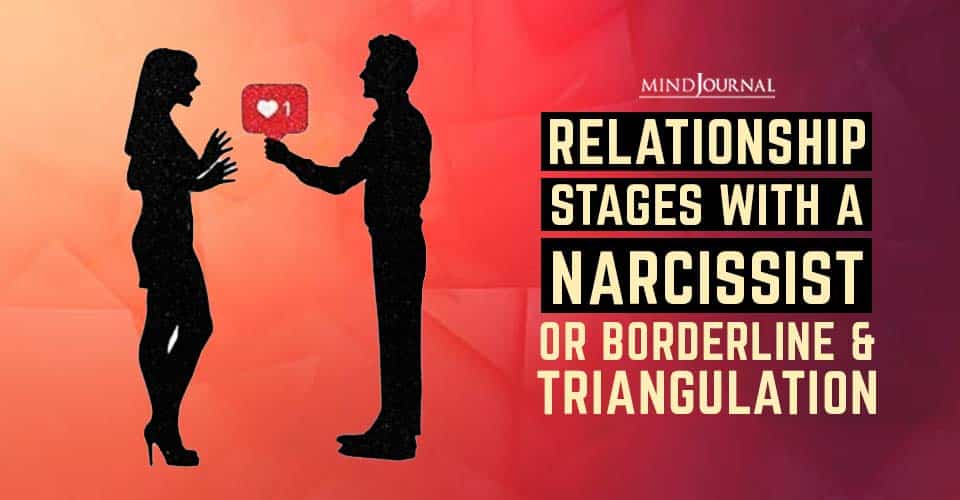 So you thought you’d finally met the woman or man of your dreams. Sure, they came on a little strong at first. The compliments seemed a bit excessive and even premature. Ignoring that nagging voice in your head, the relationship developed at a fast pace, faster than most of your other relationships and friendships.

At some point, perhaps you questioned their sincerity and insta-adoration? Maybe you even had doubts about them such as, “Is this person psycho or is it love at first sight?” After all, how can someone really know you well enough after just a few weeks (or a few days) to see all of your admirable qualities in such technicolor magnificence? How can someone who barely knows you seriously love you in such a short amount of time and be willing to commit to you so quickly?

The answers are they don’t and they can’t. You were being drugged with flattery or love-bombed.

A client once asked, “Well come on, what guy wouldn’t fall for a beautiful woman who says you’re the most amazing man she’s ever known and best sex she’s ever had?” Actually, quite a lot of men and women don’t fall for it. In fact, they become sceptical and concerned especially if the compliments are way over the top and they’re being pressured to make a fast commitment (e.g., going engagement ring shopping after only a week or wanting to move in together right away).

— whatever the DSM classification may be — begin in reverse.

Meaning the relationship starts with a really intense, decadent dessert, and by the relationship’s end, you’re dumpster diving for the measliest scraps of sustenance. A relationship between two emotionally mature individuals with boundaries and healthy senses of self develops steadily over time and builds up to dessert after pesky little things like friendship, intimacy and trust have been established.

Not so with narcissists and other emotional predators and con artists. They’re like the stereotypical used car salesmen or saleswomen of relationships. For example:

Well hello there, Carl/Connie Codependent, do I have a deal for you today! Only someone as smart, savvy, sophisticated, cultured, travelled, intuitive, honest, loving, handsome, beautiful, sexy, talented, blah, blah, blah as you can see what a GREAT opportunity this is. And because you’re soooooo special to me, I’m going to offer this deal to you and only you (wink, wink, nudge, nudge).

Your life will never be the same if you hitch your wagon to my star. Together we’ll create crazy works of genius! What do you mean it sounds too good to be true? I thought you were more intelligent than that? It’s okay, I forgive you for doubting my motives. Now, I’ll just need you to sign here, here and here. Don’t worry about that, it’s just the fine print. Yes, and the devil is in the details.

Related: Narcissus And Echo: The Heartbreak Of Relationships With Narcissists

Now, if an unscrupulous salesperson slithered up to you at the local used car lot and laid it on nice and thick like that, wouldn’t you reflexively raise an eyebrow to their patter? You’d wonder, and rightly so, if the salesperson was trying to unload shoddy goods for their own personal gain at significant cost to you. No matter how shiny and attractively presented a narcissist might appear to be at first glance, under the hood they’re all lemons. And not the plump, juicy ripe lemons from which you can make lemonade. They’re the hard kind that only yield a few drops of juice even when using an industrial-grade juicer.

It’s a painful thing to accept once your narcissist reveals who they truly are. Seeing behind the mask may cause you to go into extreme denial. How else could you stay after that, right? If you don’t understand the dynamics at play, it’s difficult to comprehend how things deteriorated from the initial intense love fest you shared with your narcissist to being vilified and tossed away onto the scrap heap. It’s actually pretty easy to grasp once you know how relationships with narcissists and borderlines begin, develop and devolve. Abusive personalities repeat these patterns over and over again with each new target and relationship.

The first Shrink4Men was published by Dr. Tara J. Palmatier, PsyD on January 12, 2009. Dr. Palmatier began Shrink4Men because she recognized that men who are in abusive relationships in which the perpetrator is a woman do not have the same support resources as their female counterparts. Dr. Tara holds a PsyD in Clinical Psychology and an MSc in Counseling Psychology. She has over 24 years of experience delivering direct services to diverse populations in a variety of settings. Dr. Tara currently publishes the Shrink4Men website, blog, and forum. She specializes in helping men who are trying to end relationships or seeking coping strategies for dealing with their abusive wives, girlfriends or exes, many of whom have been diagnosed with a personality disorder or whom they suspect have personality disorders or traits.View Author posts