Narcissus And Echo: The Heartbreak of Relationships With Narcissists 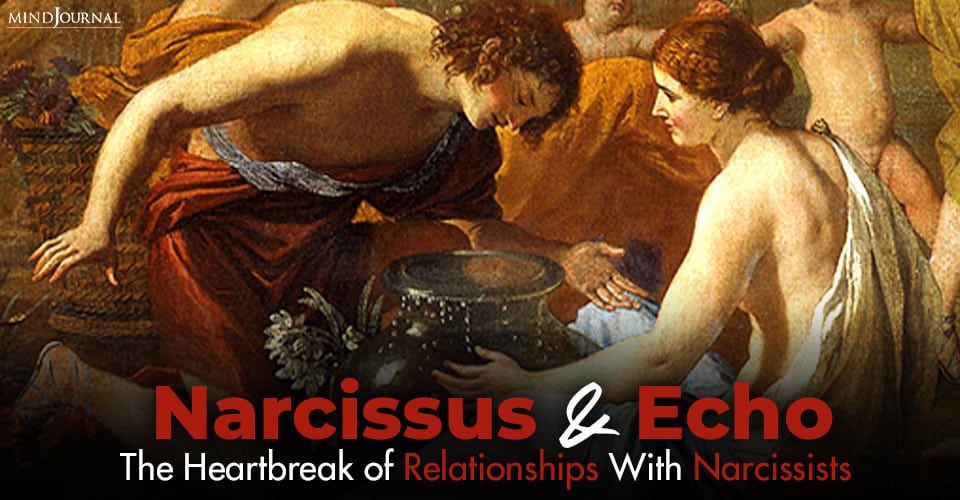 The poignant myth of Narcissus and Echo crystallizes the tragic problem of relationships with narcissists. They were tragic Greek characters in a story told by the Roman poet Ovid in Metamorphoses.

Sadly, both partners are locked into a painful drama, where neither feel satisfied or sufficiently loved. Although it’s anguish for them both, the narcissist blames the cause on his or her partner, and sees him or herself as irreproachable, and too often his or her partner readily agrees.

The Myth of Narcissus and Echo

Narcissus was a handsome hunter who broke the hearts of many women. Despite their love, he remained aloof and arrogant. Pridefully, he held them in disdain.

Meanwhile, the beautiful forest nymph Echo had incurred the ire of the goddess Juno, who punished Echo for talking too much by depriving her of free expression. From then on, she could only repeat the last words of others. Echo spotted Narcissus and became infatuated. She longed for his attention, but he was fixated on himself. She tried to call out to him, yet couldn’t.

One day, Narcissus became separated from his hunting companions and called out, “Is anyone there?” Echo could only repeat his words. Startled, he said, “Come here,” which Echo repeated. Echo jubilantly rushed to Narcissus, but he spurned her, saying, “Hands off! May I die before you enjoy my body.” Humiliated and rejected, Echo fled in shame. Nevertheless, her love for Narcissus grew.

To punish Narcissus for his arrogance, Nemesis, the goddess of revenge, put a spell on him. When Narcissus next noticed his reflection in a pool of water, love overtook him. He believed that he’d finally found someone worthy of his love and became entirely absorbed with his own beautiful image, not realizing it was actually himself.

Unable to get Narcissus’ attention, Echo’s obsession and depression grew. As the years passed, she lost her youth and beauty pining away for unattainable Narcissus until she wasted away, only leaving behind her echoing voice. He eventually committed suicide, consumed by his impossible love, leaving a flower in his place.

Despite their seemingly strong personality, narcissists are actually very vulnerable underneath their protective armor. Command of their feelings and of other people is all-important because without control they feel weak and humiliated. They’re drawn to someone emotionally expressive and nurturing, qualities they lack. Vulnerable feelings, especially shame, sadness, and fear, are relegated to their unconscious.

They have disdain for them or any sign of weakness, which arouses fears of being controlled or humiliated. Thus, to feel sad or lonely evokes their need for someone, which would expose them to hurt, rejection, and feeling inferior. They attempt to eliminate these uncomfortable feelings by demonstrating independence, courage, and strength—ideals with which they identify.

Like the myth, narcissists feel superior to others, yet depend upon them to reflect back a positive self-image. Surprisingly, most narcissists are codependent, too. They’re hypersensitive to any perceived challenge to their illusion of being the best, and often perceive slights where none exist. They dread being considered a fraud, having their shortcomings revealed, their opinions or authority questioned, or their self-esteem or pride tarnished. They will do what it takes to prop up their image and block negative feedback.

In their arrogance, they can be dismissive and rude, including projecting their shortcomings on others, criticizing and belittling them or unleashing their narcissistic rage. Trying to please them feels thankless, like trying to fill a bottomless pit―their inner emptiness―which they expect others to fill, but of course, it’s impossible.