Why Narcissists Love To Ruin Holidays: 5 Things To Know 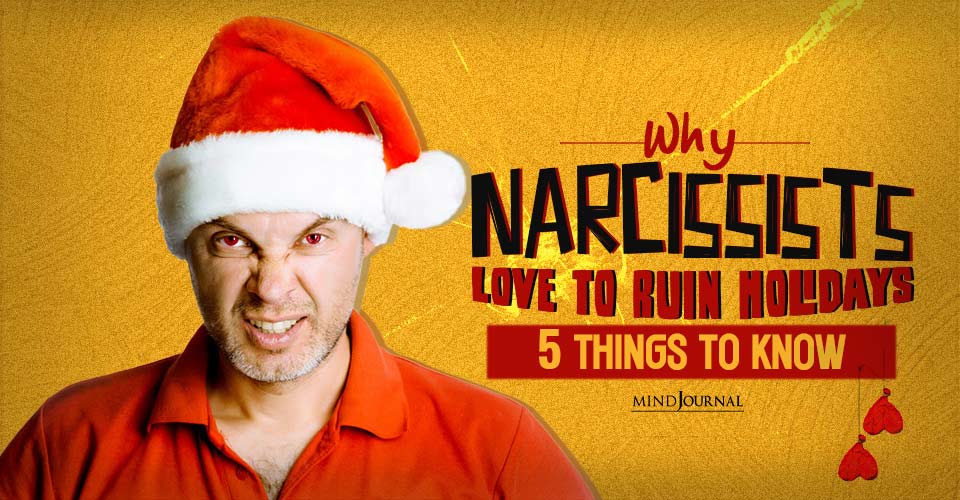 T’was the night before Christmas and all through the house,
Not a narcissist was stirring, not even a text.
The stockings were hung by the chimney with care,
In hopes that he’d show up – he said he’d be there.
I couldn’t sleep – all nestled in bed.
There were visions of cheating dancing in my head…

It’s no coincidence that during holidays, birthdays, and other special occasions, that a narcissist’s ‘unpleasantness’ is in full beast mode. At a time when most people are looking forward to giving and spending time together, a narcissist’s behavior seems very out of place.

My long-term Narcissist and I used to spend Christmas’ apart. His mother would fly him to her across the country and I would stay at home with my family. On those occasions where he would have to stay in the city with me and my family, he would make my Christmas miserable. I remember feeling like I had to walk on eggshells to not upset him further.

He would sit like a lump in a corner somewhere, scowling, not participating, and acting completely miserable. He would receive gifts from my family, who tried to include him while having contributed nothing to the day. All the gifts would be purchased and wrapped by me. I’d put his name, along with mine on the tag and all I would get was an antagonistic attitude. I remember bending over backward to make him happy and nothing ever did.

When we would get home, he would go off about how materialistic my family was and why would anyone spend so much money on presents. He hated my mother’s mashed potatoes – too creamy. He hated my brother…. He couldn’t get out of there fast enough and would make the whole experience unpleasant for me, to the point where I’d wished I hadn’t brought him.

He would act like I was so selfish for having to put him through such an awful ordeal and I had to be extremely grateful that he did me such a service by accompanying me.

I’ve also been involved with narcissists, who would wait about a week or two before a birthday, or a holiday, to pick a fight and break up with me, only to get back together at some point shortly thereafter. “I didn’t spend your birthday with you, or get you a gift, because we were broken up at that time,” is how they’d justify it to themselves.

With some of them, the timing of the fight would become so predictable that I would brace myself for the inevitable, as the day drew closer. I was being trained to expect nothing from them and nothing is exactly what I got. From my own experiences and those of others, I can say with relative certainty that if you’re involved with a Narcissist don’t expect a stress-free holiday.

Some will be there criticizing and complaining the entire time while contributing nothing, others will disappear and magically reappear a short time afterward. Once you know what you’re dealing with it makes things a whole lot clearer.

Why Narcissists Make The Holidays So Unpleasant

One of my favorite things about Christmas is watching the faces of the little ones as they open their gifts. I also like giving things to people that I know they wouldn’t dare splurge on for themselves. It brings me a great deal of joy to make other people happy.

When you lack the empathy chip, there is no joy in giving or making others happy. It’s not a behavior they attach any significance to. To them, it seems like a monumental waste of time and money and they feel incredibly put out to have to suffer through such an occasion with people they loathe.