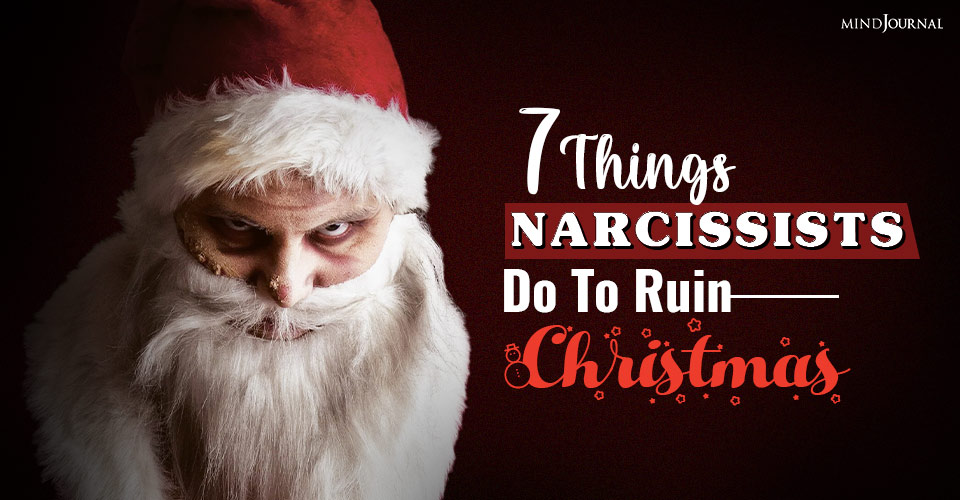 Narcissists cannot bear to see others’ happiness, and that’s why they can go to any lengths to make sure that nobody feels even an iota of happiness, especially during the holidays. There are many things narcissists do to ruin Christmas for everyone because that’s the only way they feel better about themselves.

Christmas is a strange time for narcissists. They may enjoy the lavish gifts, the drinking and the eating. But they often don’t enjoy the other side of Christmas.

Christmas is a time for families to get together. To wrap presents and drink hot chocolate by the warm fire. Bonding and show love for one another. But narcissists don’t usually like this part.

Narcissists struggle to truly bond with those closest to them. Their impaired empathy makes it difficult to fully connect. Leaving them not knowing how to act. And feeling their disconnect, whilst jealously watching others enjoying each others company.

This can cause narcissists to act up, or act strange. Because they don’t want people to know their secret internal struggles.

The more overt narcissists struggle not being the centre of attention. And when there’s lots of people, there’s more competition. So they may act up when the crowds arrive, to grab the spotlight. Negative attention is usually better than nothing for narcissists. So they may cause trouble to claim centre stage.

Narcissists don’t all behave the same over Christmas. But there’s many common behaviours I’ve noticed over the years. In this article, I’ll talk about some of the behaviours I’ve observed, plus why they do these things. Feel free to add your observations in the comments at the end…

1. Invite People Round, Then Ignore Them

I remember being on the receiving end of this with my ex-mother-in-law. She invited us round for Christmas at 11 am. When we arrived she was clearly in a bad mood, because her sister-in-law was not available to help her, when she assumed she would be.

We literally sat around for several hours doing nothing, as she and my ex-father-in-law did odd jobs and went out to run errands. It felt like just another day. It was not until the evening that any Christmas celebrations started. So why invite us round so early if they weren’t celebrating?

She had a habit of doing things like this. She’d invite us round and then not be in. Then expect us to wait in her house until she decided to come home.

I’m pretty sure this was a power game. Get people waiting until their fabulous self decides to grace them with their majestic presence. By making you wait around, the narcissist establishes their superiority. Both to themselves and to you. They are above you, which is why you must wait for them.

2. Ruin It For Everyone

Some narcissists opt to ruin Christmas. This can be for a few reasons.

Some narcissists are “too cool for school”. Narcissists like to think they’re superior. So some act like nothing is good enough, which can really put a bummer on proceedings. They may criticise the food, the decorations, or the gifts. And although they probably barely contributed, in their mind, they’d have done a much better job.

Narcissists don’t really know how to bond with their loved ones. So some act up to cover this. They might wind the children up, or a sensitive adult, so they react to their provocations. The narcissist then expertly places the blame on how they reacted and convinces everyone that the other person is to blame. This provides a handy smokescreen for their own behaviours because everyone is looking at the accused.

Other narcissists act up to be the centre of attention. If they feel things aren’t revolving around them, then they might cause an argument or two, just so that everyone is focused on them. Or go into a sulk, making everyone walk on eggshells.

Related: Why Narcissists Love To Ruin Holidays: 5 Things To Know

Some narcissists deal with Christmas by getting hopelessly drunk. They know that drinking acts as a cover for their behaviours because people assume they’re being horrible or awkward because of the alcohol.

Narcissists know their family will forgive them if they acted out when drunk. Because it was “only the drink talking”.

When I was a young child one Christmas, my Dad drank whiskey until he had to go to bed for the rest of the day. And this was by dinner time 12 PM!

Narcissists rarely take responsibility for things going on around them. So if they want to get drunk, then they probably will. Regardless of what needs doing, and any responsibilities they may have.

I am a clinical hypnotherapist, mental health professional, and narcissisms blogger.View Author posts