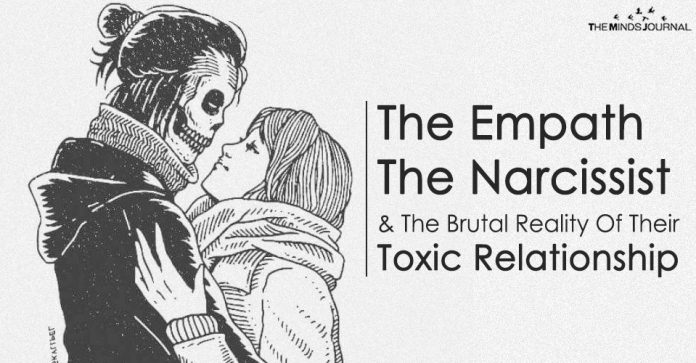 The Empath, The Narcissist And The Brutal Reality Of Their Toxic Relationship

The term “Empaths” refers to people who are highly sensitive to the needs and emotions of others. They put others needs before their own, and are motivated by an intrinsic desire to help and heal humanity.

The term “Narcissists” refers to people who have a grandiose sense of self. They put their needs first, and are motivated by their own self-interest and ego-driven desires.

Narcissists are not born but made out of certain difficult circumstances that they faced during their childhood or youth. Their emotions were not reciprocated ideally in their early years and hence they grow up with a lot of emotional pain and instability. They try to cover up the pain by creating a grandiose sense of self and seeking external validation and attention.

The Reality of Their Toxic Relationship

Empaths and Narcissists are attracted to each other because they mirror each other’s shadow sides. They unconsciously project their dark sides and deepest fears onto each other.

Empaths don’t know that they have a fear of rejection or loss or abandonment. They try to cover up this fear by extending love and support to everyone around them but they do not know that the solution really lies in facing their fear and loving themselves before they try to rescue others.

Empaths lack boundaries and unconsciously look upto the narcissist to set boundaries for them.

Empaths need to detach a bit form their emotions and learn emotional independence before they can have healthy relationships. Till they don’t practice self-love or learn to create strong boundaries, they will keep on attracting Narcissists in their lives.

Narcissists struggle with fear of commitment, emotional attachment and vulnerability. They did not get any emotional validation in their childhood and they do not know how to handle their emotions properly so they rely on Empaths to live out their emotional intensity through them. They think that embracing their vulnerability and emotions will make them weak and cause them more pain so they cut off themselves from any emotions or empathy. They only live out to feed their grandiose sense of self. They must learn to become responsible by allowing themselves to feel their emotions fully, before they can have healthy relationships.

How to end the Toxic Cycle

For abusive and co-dependent relationships to work, there has to be an imbalance in both the parties involved. If the abused refuses to take abuse and simply walks away, the abuse would stop.

The first step to end the toxic cycle is the awareness and recognition that the relationship dynamic is unhealthy.

An Empath can save himself from the toxic relationship dynamic if he becomes self aware and embraces his shadow side and practices healthy boundaries.
In case you’re an Empath, you need to learn to emotionally detach a little so that you can see through the real intentions of people and can identify a Narcissist when you come across one.