The Dark Side Of Being An Empath 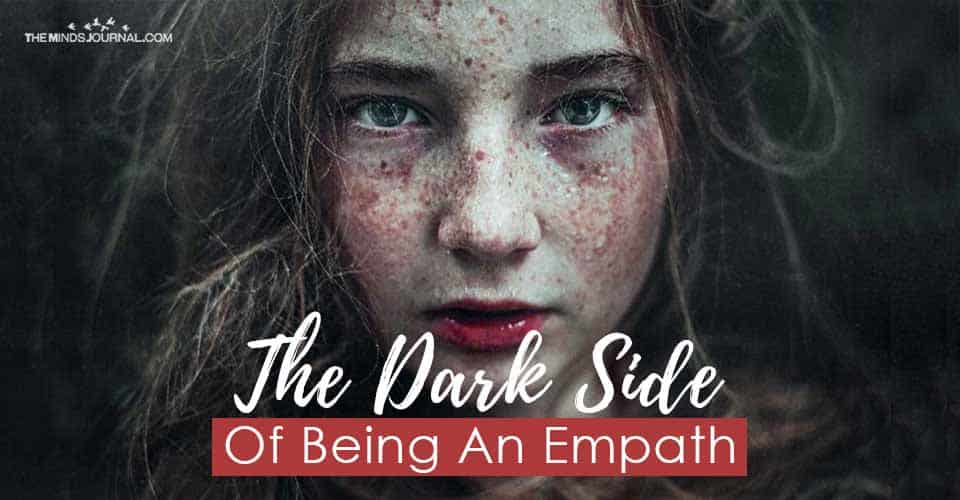 The Dark Side Of Being An Empath… The untold story

You see them walk around wearing their soul on their sleeves; empaths are the smiling, ever glowing, and compassionate souls.

For centuries, researchers have studied the tendency for people to unconsciously and automatically mimic the emotional expressions of others, and in many cases actually feel the same feelings simply by exposure to emotions in social interactions. Studies have found that the mimicry of a frown or a smile or other kinds of emotional expression trigger reactions in our brains that cause us to interpret those expressions as our own feelings. Simply put, as a species, we are innately vulnerable to “catching” other people’s emotions. In the literature, this process in which a person or a group influences the emotions and affective behavior of another person or group through the conscious or unconcious induction of emotions is referred to as emotional contagion (EC). – Sherrie Bourg Carter, Emotions Are Contagious, Choose Your Company Wisely

I believe everyone has equal light and darkness within them, empaths are those who emphasize on the light within them and also believe in spreading it. People take them as someone meant to dispel the darkness but what they don’t realize is anything that emits light burns within, be it the sun, a filament bulb, or a candle. Empaths are no exception. There is a dark side of an empath.

Related: The 5 Powers Of Empaths

They feel things; understand things that no one else can.

Empaths have this unexplainable gift that comes with a high cost and many cons.

The energy they are surrounded with talks to their soul, words is a mere formality. By the time you finish the formal introduction, his soul will have taken yours for a walk. This might sound baffling but an empath doesn’t need to spend days, months, or years with you to know what you’re made of. Just a touch of your soul i.e. few minutes and he will have sensed the energy in you and in another minute your souls would be playing together.

Related: Dear Empath. Do Your Feel Guilty For Taking Care Of You?

Looks like a happy world, doesn’t it? But my dear, the world is fucked up the place; there are also toxic people, the abusive scavengers who just want their selfish motives fulfilled. Any sane person in their right mind would avoid such people; at least after knowing them but our hero here, the empaths won’t do so. ‘No’ is way too rude for an empath to speak and is rarely constituted in their vocabulary. As a result, the empath allows itself to be manipulated, used, and abused but still believes they are doing it for a greater good and their utmost purpose i.e. illuminating.

Mind you, here the empaths don’t just drive the darkness away but absorb it and confine it within them. An empath suffers in silence, no matter how much he is suffocating from the hands of darkness around his throat, still smiles, and is always ready to extend his hands for help. It takes every bit of his strength to not give in to the darkness.

There is a dark side of an empath. He has his demons to fight, his flaws to correct and depression to deal with but my dear, you first. They always put others before them. It doesn’t require a personal tragedy for them to suffer.

While the death of a child shown in news may make everyone sad for a while but for empaths, it strikes hard, the impact is dense and deep. Even if they wanted to they couldn’t feel less intensely. There is a tsunami taking its toll inside them but even for a second, they won’t lose their composure. There are rarely any occasions where they break down and lose control.

Related: Are Empaths Signs of a New Human Evolution?

If you think that’s messed up, there is still more to come. As empaths are sensitive to energy and vibration around them, the company is not their cup of tea, or coffee, whatever you prefer.

Here are 5 tips to know if you’re an empath:

When they are around too many people the various type of energy confuses them and triggers chaos within them. They seek solitude to let the tides settle and get their composure back. Though a lonely soul, an empath desires for a companion or at least be in a company with people who love them and accept them for who they actually are. An empath knows no boundary of love, it often makes people suspicious of how could someone possibly shower so much love in such a short time of knowing each other.

People cannot take love in high dose, it’s a tragic fact that empaths are often dumped saying ‘you’re too good for me.’ Well, that makes no sense to me but if I have to deduce it then maybe it’s a fear of not being able to reciprocate. Maybe. IDK.