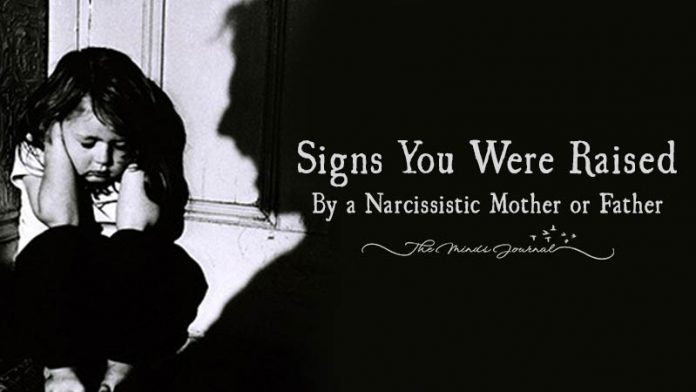 19 Signs You Were Raised By a Narcissistic Mother or Father

Learning how to understand and make peace with your childhood is one of the most healing and empowering experiences you could ever go through.

As the son of a drug-addicted mother and totally absent father, I know how important it is to come to terms with your parent’s mental illness.

When we were children, we looked up to our parents for support, encouragement, nurturing and love. But when we were denied these things, we developed a variety of beliefs, behavioral patterns and coping mechanisms to help us survive in such a difficult environment. As adults, we often play out these same coping mechanisms, often to our own detriment.

The thing about being the child of a narcissistic mother and/or father is that it often contributes to something known in shamanic terminology as soul loss. Soul loss is the inability to contact or experience our souls due to the unresolved wounds, traumas and fears we’ve accumulated over the years.

The first step in healing this soul loss is to be willing to explore what you went through as a child. This process of exploring the narcissistic actions of your parent isn’t done to condemn them or to victimise yourself. Instead, this process is done to help you understand the root cause of any pain you’re still experiencing, to learn how to release it, and to move on with your life. This becomes a strengthening and rejuvenating process.

19 Signs You Had a Narcissistic Mother and/or Father

The thing about having a narcissistic mother and/or father is that you have been taught to believe that you are the crazy and imbalanced one, instead of them. This causes you to constantly doubt yourself and any feelings you have about them.

Another major sign of being raised by narcissists is the constant guilt you struggle with. In other words, while you might suspect that there is something “off” with your parents, you feel ashamed to think about them in such a way, and you tend to start beating yourself up instead.

But there is a very good reason why you’ve come to this article. And while you may still have lingering doubts, I hope the following information can clear your mind.

Firstly, you should know that there are two main kinds of narcissists:

Here are 19 major signs that you had a narcissistic mother and/or father:

1. They tried to control you through codependency.

In other words, you were told by your parent/s, “Don’t leave me. I need you. I can’t live without you.” This made it impossible for you to live an autonomous life or establish independent priorities other than catering to the needs of your parent/s.

2. They laid on the guilt thick.

Another method of controlling you was to constantly guilt trip you into doing what they wanted. They may have told you, “I’ve done so much for you, I’ve sacrificed everything for you.” As a result, you felt indebted to them and as though you “owed” them complete obedience.

3. They only loved you when you did what THEY wanted.

Your parent/s withdrew love very easily. If you failed to do what they wanted, they would either punish you severely, or give you the silent treatment. You had the impression that they only loved you when you PROVED your worth to them.

Codependents’ reactive role amplifies their focus on their partner, while they hide who they are. They increasingly try to control the uncontrollable, sacrifice themselves, and try harder to please and be accepted.
Read more
wpDiscuz
23
0
Would love your thoughts, please comment.x
()
x
| Reply