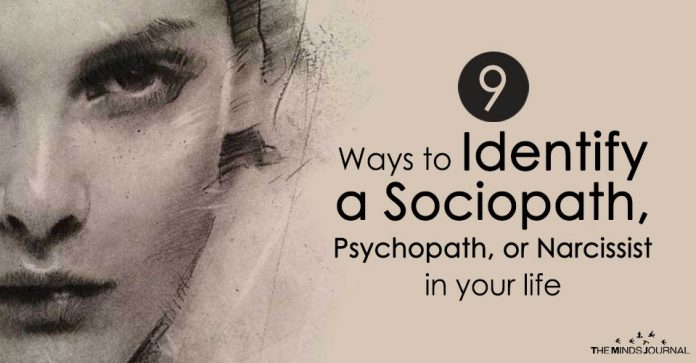 9 Ways to Identify that Sociopath, Psychopath, or Narcissist in your life

In order to understand and identify these people, we need to first undo what television has taught us. Most psychopaths are not deranged, imprisoned murderers. Most narcissists are not over-the-top womanizers who drive a flashy car. Much more likely, they’re the coworker, friend, ex, or family member who makes your brain hurt.

Psychopaths are not always murderers imprisoned in jails or unbalanced as we have seen on television. Narcissists are not always womanizers with expensive cars. They could be the ordinary people living around you- your colleague, a family member, your ex or anybody who tortures your brain.

They are able to hurt your brain because psychopaths, sociopaths, and narcissists have certain characteristics that will make anyone feel crazy over the time:

You could have met that person who swept you with their charm. The way they behaved with you made you feel special like no one has ever before. Be careful! Psychopaths are no different than shape-shifting chameleons. They are capable of changing their behavior according to the needs of their target.  They can resort to flattery or just being shy and sympathetic, whatever helps them capture the mind of the target. Remember no matter what they show themselves to be, it is never a true image.

Psychopaths will turn you “crazy.” Yes, they will, if you are not careful to take care. They will create chaos and then quietly sit at one corner. You will be surprised when they will blame you for reacting. Because of the trust they build, you believe their words to be true and when you react at their provocation they haughtily tell you, “not having this discussion with you again.”  Naturally, you feel nothing but a hypersensitive fool.

Psychopaths are compulsive liars. They simply can’t help it because it is ingrained in their characters. They will tell a different story even when the actual story would be a better one. Shifting personas is, constructing stories and lying is part of their self. If somehow you catch them with proof, they will use it against you and question you blatantly and brand you as over-analyzing and paranoid.

Anybody with normal behavior will feel guilt and remorse for doing things that psychopaths do, cheating, manipulating, stealing. Psychopaths don’t feel any regret for what they do to other. They do it because they know behavior harms other and that is why they enjoy it very much. If there is a psychopath in your life and you have ever received an apology from them, be sure it was for saving themselves from a worst situation or if they knew the act will help them gain something from you.

Psychopaths have no attachment to anybody. They are not capable of feeling love and being loyal. They are so full of deceit that they can forge a friendly and committed relationship with anybody and then replace them instantly when required. The victim always feels an immediate closeness and excitement with them. They make their target feel how special and different they are from all the crazy people in their life, but when time comes they are very quick to declare the victim just the same. As a psychopath moves on, they leave stories of destruction behind them, but they always blame their victims for everything.

A psychopath wants all the attention and this they do by turning people against one another. When you are the target of a psychopath you will find not liking anybody around you, not even the people you have never met. Psychopaths continuously inject venom and false stories into their surroundings, making each person jealous and distrustful about the others.

They are difficult to identify until it is too late. They do all these evil things under the mask of innocence, using sob stories and false-concern to twist your perception. Psychopaths drive people to lose their focus on anything else and create a situation where everyone is competing against each other to get their attention. This seems to be desired and wanted by everyone at all times.

When a psychopath is around, one is likely to feel suffer from self-doubt and fear and these feeling will rise with each passing day. A psychopath projects themselves as “perfect” individuals in their victim’s eyes from day one. You will find yourself constantly struggling to reconcile the person who has an iconic image in your mind. Why do you have to struggle so much? This is because the persona you are considering as “perfect” is fake and nothing such existed. You have been trying to keep up with a false individual, and that is what you will find most difficult to accept.

You are always the wrong one when a psychopath is in your life. They will lie, steal, manipulate, cheat and con, but always you are the one who is with problems. Psychopaths are born with the ability to bend your perception about your own self. You will be made to feel, you are the one who is wrong when you point out their faults.

If you ever believed a psychopath when they did something that could have risked their life or reputation, think again. A psychopath is more intense and can do bizarre and erratic things. They will do these things to make their victim believe what they want to or if it is necessary to gain their attention. Weirder still, they will commit such acts with the spontaneity that can be matched only with truthfulness. One cannot help but think that no one will take such risks and will be persuaded to believe in psychopath’s version of story.

They have been victimized by everyone. All the bad things that happened with them have been caused by someone else. The entire system acted against them, and that is why they did not get that much deserving promotion. Their ex was a cheater, liar, infidel, crazy or anything bad that can be imagined, which led to the divorce. They did not receive the custody of the kids because their ex planted false accusations in the court. If you look carefully, you can trace a pattern of blame game— psychopath –the victim and everyone else– ‘the culprit’. 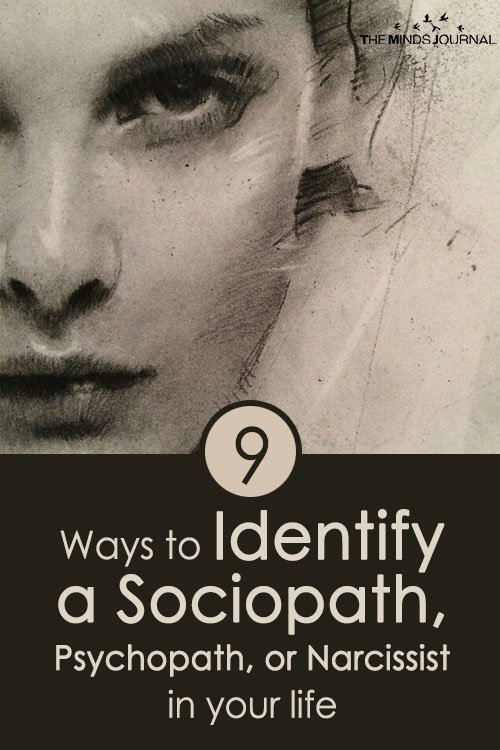 Optimistic women blindly hope that their toxic relationship will become perfect one day. Optimism makes it difficult for them to leave the relationship.
Read more
wpDiscuz
7
0
Would love your thoughts, please comment.x
()
x
| Reply