D.I.Y. Guide to a Sociopath’s Brain and Psyche 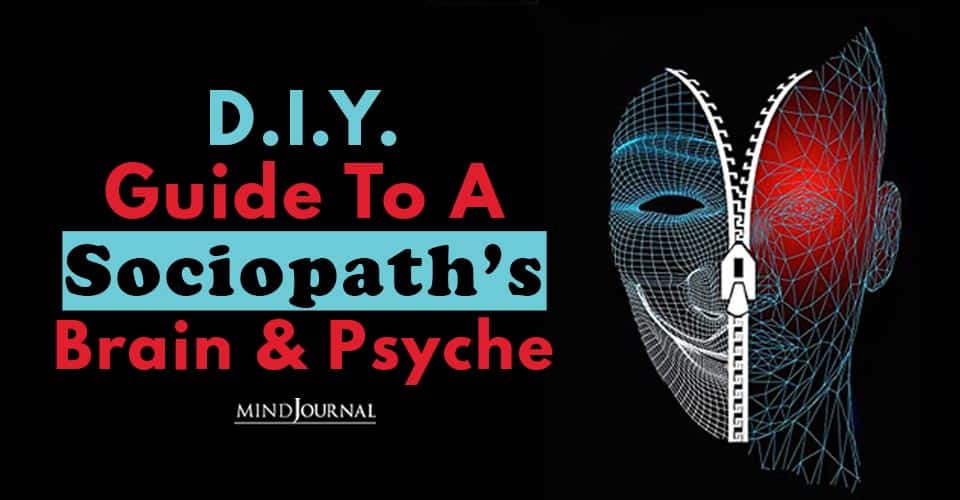 Sociopaths, narcissists, pathological users, liars, predators don’t think as we do. Their hearts are colder than ice; harder than stone. The trouble lies within their brains.

Sociopaths are known for their charm if you like that particular sociopath. Then, along the way, there’s that hairpin turn to nightmare behavior. This D.I.Y. Guide to a sociopath’s brain and psyche cracks the code. So… what’s going on in those heads of theirs?

Sociopaths, the pathological user doesn’t think as we do because they can’t. The vast chasm of difference between “normal” and “sociopath” is found in the brain.

Read 11 Warning Signs Of A Sociopath in Your Life

Sociopaths Have a Brain That Works Very Differently than Ours

These pathological users can act in ways we’d never imagine. Making use of others is their normal.

Sociopaths and psychopaths‘ brains don’t work a bit like ours. It’s confusing and frustrating to try to build relationships with them because they’re missing the building blocks of bonding.

We get caught up in our own emotional reaction to what’s happening between us and them. We go to emotions and talking things out to correct conflict and confusion and to bond. We “feel” our way through life.

We Are Normal Through and Through

And that’s normal… and really great, except these narcissistic pathological users aren’t normal and don’t care what we feel, so it doesn’t help us at all.

Sociopaths and psychopaths do not have the brain capacity to feel any social connection or bond. We look into their eyes searching for a connection and find nothing but “empty”.

Empty and hollow and devoid of humanity. This is the real reason they have intimacy issues. Don’t believe that “abuse” story.

How Can Sociopaths Do What They Do?

Whether we call them sociopaths, malignant narcissists, con artists, scammers, covert narcissists, liars, or users – they’re all alike. It’s incredibly hard for us to imagine the vast emptiness inside their heads.

Without any human connection, they have only one thing going on in their upstairs hamster wheel of a brain: survival.

The way a predator, parasite such as the sociopath survives is like any parasite, they live through the efforts of others and off of others. They know this about themselves. They count on us not knowing this.

Read Why Empathic People Are Natural Targets For Sociopaths

We Can Only Be Normal

We, as normal humans who do bond and care, have limbic brains. This is the brain of a mammal. A mammal is an animal – including us humans – that gives vaginal births. Yah! I know, right! This includes in part cows, bunnies, dogs, cats, monkeys, elephants, dolphins, and whales. Each of these, including humans, bonds, loves, nurtures, creates family groups, and can even bond with one another.

Antisocial psychopaths are referred to as a sociopath, sometimes a narcissist or a psychopath. The sociopath has what’s called a “reptilian brain”. Think of creatures of a reptilian brain, snakes, lizards, crocodiles.

They lay eggs, do not create a family, and even eat their young both before or after the eggs hatch. – There are a few exceptions here, but this is to give an idea of the fundamental difference that matters: no nurturing, no parenting, no bonding, no pairs, or family group.

Sociopaths Can Only Be Sociopaths

What the sociopath is wired by their brain to do in order to live, to survive, to exist has the effect of destroying others. They know this. It doesn’t faze them. This sounds farfetched unless you’ve been in it.

There’s Really No One Home: But Evil

Sociopaths are without any bonding capability, therefore they’re without genuine concern or care for any human or for any animal though they pretend either or both.

They have no moral, ethical, spiritual concern for others or for the effect on others as fall out and as deliberate effect. imagine if you can: they have no conscience. – They do however make use of our conscience and our emotions and normal bonding impulses to prolong their parasitic stay in any person’s life.

With this primal urge to survive, which we all share, when the brain doesn’t bond or care then what’s left in these simple creatures is spartan. It’s purely and the only motivation to make use of other people, to take whatever they want, and get away with it. – There is nothing else there.

Jennifer Smith founded True Love Scam Recovery in encouragement and support of those hijacked by a sociopath in a true love scam after marrying and escaping one herself. 'The Sociopath's Scam - It Isn't Personal' in Shahida Arabi, 'Becoming the Narcissists Nightmare: How to Devalue and Discard the Narcissist While Supplying Yourself'.View Author posts