8 Identifying Traits of A Sociopath 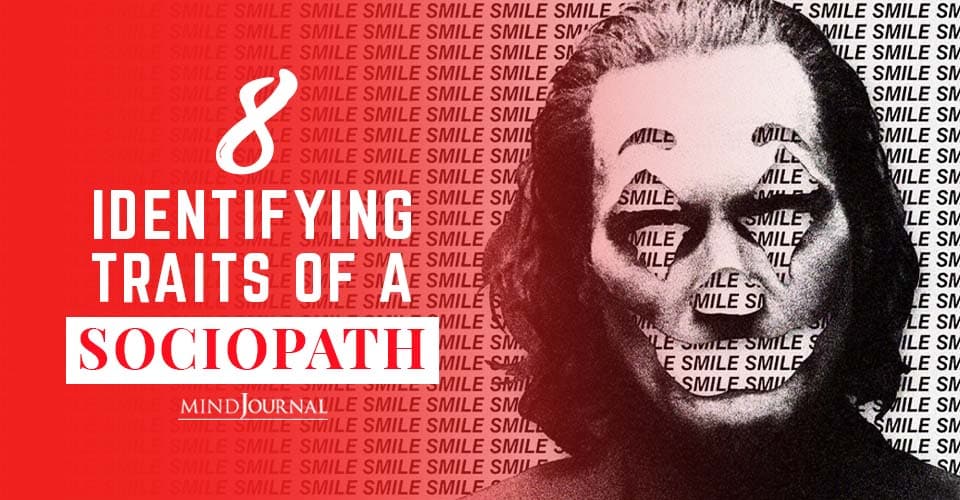 The scary thing about a sociopath is probably that anybody you know can be one. However, knowing the traits of a sociopath will help you protect yourself.

Understanding how, exactly, sociopaths operate. By “understanding,” I do not mean that we can or should emotionally understand their behavior or excuse it in ANY way. I mean that we can and should intellectually understand their behavior because, by doing so, we find new wisdom and we take back our power! Below, I summarize the main concepts I learned about the sociopathic mind from various experts in the field.

Here Are The 8 Identifying Traits of A Sociopath

1. Sociopathy lies on a spectrum.

Sociopaths cannot be easily identified. As a matter of fact, it is extremely difficult and sometimes confusing to understand who is an actual sociopath. So much so that, at times professionals like psychologists and psychiatrists are also fooled.

Additionally, certain people showcase more sociopathic traits than others, which is why sociopathy lies on a spectrum. While some sociopaths are more open about their narcissism, some are more secretive about it. That is just one of the many differences and examples. This is why several terms have been used to describe people who display atypical personality traits, including narcissists, psychopaths, and sociopaths.

Furthermore, what fuels the confusion is that researchers, therapists, and psychologists do not agree regarding which term sought to be used or what their definitions should be. In spite of this discrepancy, the fact remains the same- a person who shows any kind of sociopathic traits is in truth, toxic and should be avoided at every cost.

2. Sociopaths have no conscience whatsoever.

Sociopaths know the intellectual difference between right and wrong. They understand society’s expectations. They understand what moral behavior is supposed to look like. They even understand that actions have consequences. But, they do not care, and not even for a second.

Sociopaths feel no guilt or remorse at all, and that is what makes them dangerous to be around. This lack of conscience makes them step on the feelings, rights, and safety of others. They have zero limits and scarily capable of anything and everything. In short, it is a recipe for unending perversion and cruelty.

Related: How To Spot A Sociopath

3. Sociopaths have an extremely finite range of human emotions.

Sociopaths seldom feel any kind of emotions, making them nothing short of empty shells. They experience “shallow” feelings, which means that virtually all of their emotions are fleeting if they have them at all. They seem to feel rage and envy in full force, which fuels aggressive behavior in many of them. However, any rages they display are surprisingly short-lived.

Due to this shortcoming, they fail to connect with other people on an emotional level and develop stable and meaningful relationships. Empathy, compassion, sympathy-all these emotions are alien to them. They only get meaningless and short-lived thrills out of things like food or sex and are also experts at manipulating, dominating, and betraying other people. Most ominously, this emotional deficiency means that they are unable to love.

This leads to emptiness and the hollow feeling that makes them chronically bored. The boredom is almost painful for them, and they will do anything to alleviate it. This builds a tendency in them, to act recklessly and impulsively. This is why, it is very common for sociopaths to become addicted to drugs, sex, and alcohol.

4. Sociopaths consider everything in their lives to be won.

One of the most dominant traits of a sociopath is that they are obsessed with winning, and worse still, winning at any cost. Since they cannot build real relationships, they approach their interactions with others similar to that of a game. The other person is simply a dispensable pawn in their twisted game of manipulation and greed.

They use tactics like deception, mirroring, pity plays, gaslighting, manipulating, and other forms of physical and emotional abuse to idealize, intimidate, confuse and trick others, all in the name of “winning.”

5. Sociopaths are experts at exploiting people.

The ultimate purpose of every sociopath’s life is to do whatever it takes to get what he or she wants at that moment. Since sociopaths do not understand love, they objectify other people as things that can be obtained, used, and then discarded.

So when they interact with others, they follow a similar pattern—idealize, devalue, and discard—over and over again. Their desires change abruptly and unexpectedly; at any given moment, they might want a place to stay, or money or sex, or a temporary thrill or even a cloak of normalcy.

Sociopaths love putting other people down and play with their emotions like a dog plays with a ball. They feel a disgusting sense of happiness and fun when they see how much their actions are hurting and degrading other people.

When sociopaths project, they are giving their targets disguised clues. They tend to criticize people who exploit others and hurt people for their own fun, but they don’t realize that they are perfectly describing themselves. They tremendously gaslight their victims, especially if they are called out on their tricks.

In no way, will a sociopath let the other person put them down, even if they have every reason to. A sociopath’s mantra is- “I can treat you any way I want, but you can never do the same.”