The Absolute Narcissist’s Playbook: 60+ Tricks For Pretending They Win 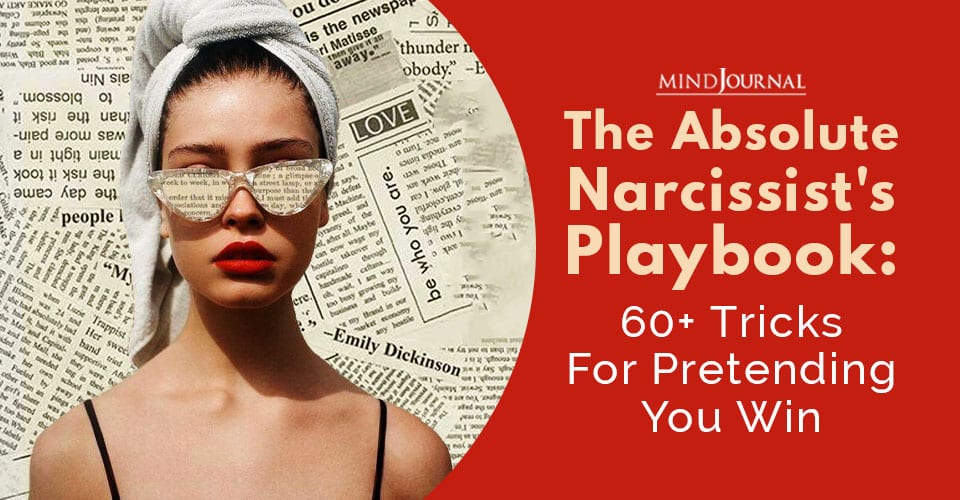 Are you tired of a narcissist’s toxicity, and cheap tricks, and want to know how their mind works? Then you should take a look at a narcissist’s playbook.

You know all these tricks. You’ve probably used some of them in a pinch. You’ve certainly suspected others of using them. When someone uses them mix-and-match and wall-to-wall, you rightly begin to wonder if they’re just an absolute narcissist—a gloat-boat.

You stop listening to the ideas they espouse because all you hear is know-it-all, say-no-to-it-all deflection. If it’s a challenge to their authority, they’ve got a ready reason why it’s just plain wrong, a generic reason in that you could apply any of these tricks in pretty much any situation in defense of anyone.

They’re mercenary tricks. All-purpose ways of saying “Nope, I’m always right and you’re just a fool.” That’s why they come across as robotic. It takes no thinking to use these tricks, and once you come to depend on them, you’re ready for anything. You can shut down your heart and mind because they only get in the way of automatically deflecting all challenges.

Some end with the awkward -izing or -ifying. I use these as they are used in “moralizing” or “justifying.” They tend to mean “deliberately misrepresenting.” And the list could go on. Humans are ingenious, but perhaps most ingenious at developing all-purpose self-defenses that, strung together mix and match, can be used to make ourselves feel infallible.

Here Is The Absolute Narcissist’s Playbook:

1. “In our debate, obviously you’re dead wrong.” Self-umpiring. Pretending you’re the judge who decides the winner of an argument you’ve entered.

2. “Don’t be defensive.” Fake-neutrality. Pretending you’re stating a fact when it’s just your opinion. Saying “You’re defensive,” instead of saying, “I think you’re being defensive.”

3. “Hey now, you don’t know that for sure.” Going uncertain. Posing as the scientifically skeptical authority by casting uncertainty on any challenge to your opinion.

4. “Hey! No fair! You won fair and square. If this was a fair contest, I’d win, too.” Sore loser umping. When losing, pretending that a fair contest means an equal outcome.

5. “You’re wrong which proves I’m right.” Default logic. Assuming that if you can find even one thing wrong with a challenger’s arguments, you’re automatically right by default.

6. “You think that?! You don’t know anything, do you?” Infallibility baiting. Turning a debate into a winner-takes-all contest to prove you’re right about everything and your opponent is wrong about everything.

8. “Ha! I see that the truth upsets you.” Taunting. Pretending that an emotional response disqualifies anyone who challenges you. This one is especially handy late in an argument. After having frustrated your opponents with absolute unreceptive, you can pull this one out as a coup de grace.

9. “Don’t tell me about justice! I hate when people are unjust to me!” Justicizing. Pretending that your obsession with fairness to you makes you the authority on fairness.

10. “I pity you, you’re so stupid. Sad.” Crocodile tears. A put-down dressed up as sympathy.

11. “Wow, I’m disappointed. I expected more from a professional like you. You should have responded respectfully to me after I called you a blithering idiot.” Connoisseur-ratting. Pretending to be the upholder of high standards. Delivering put-downs dressed up as upholding high standards.