5 Projection Techniques Narcissists Use To Manipulate People Around Them 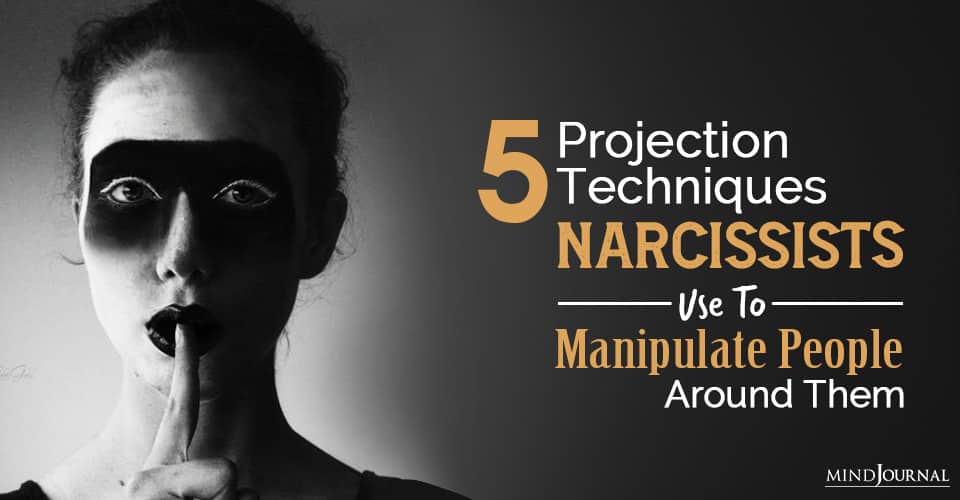 One of the most powerful and twisted weapons of a narcissist is their power of projection. Through their manipulative projection techniques, they control and manipulate the people around them to do their bidding.

The narcissist’s self-esteem and self-worth depend on how other people perceive them, as most of them generally lack self-awareness.

They tend to deny flaws in themselves and put the blame on others for their personal shortcomings, misfortunes, and mistakes. There is even a word for this mess: it’s called projection. People with narcissistic tendencies are projection-heavy individuals.

In what follows we’ll explore 5 different ways narcissists with sociopathic and psychopathic tendencies project, blame, deny, confuse, and hurt the people around them.

Here Are 5 Projection Techniques Narcissists Use To Attack Others

1. They Put The Blame On Others For Their Own Advantage.

If they themselves ask for remorse, what they’re truly asking is to guilt you so they can better hide what they do not want you to know. And since it is never their own fault, this gives them another way to pass the blame. It works as a therapeutic release for a collective group of narcissists to always be demanding and receiving a public apology.

Additionally, gaslighting is a known method they use for twisting reality to make others doubt themselves so they can further their own agenda.

As defined on Wikipedia: “Gaslighting or gas-lighting is a form of mental abuse in which information is twisted or spun, selectively omitted to favor the abuser, or false information is presented with the intent of making victims doubt their own memory, perception, and sanity.”

2. They Play The Victim.

Playing the victim is a common narcissistic strategy. Rather than working through it internally or face to face with the other person, they have no issue with dragging others into it by lying and painting you a the abuser and themselves as the victim. This regularly involves a preemptive strike or a provocation to get a reaction.

For instance, slandering you, destroying your property, turning others against you, or physically attacking you. And as soon as you respond appropriately to their active or passive aggression, they will say that you’re the aggressor because you are hurting them or that you’re unreasonable because of your “unacceptable, animalistic behavior.”

It’s sneaky and calculated, and again, it involves accusing you of things they have done or are doing themselves. So it’s not surprising that the audience of such drama does not see the whole picture or does not care enough to familiarize themselves with the full story.

Many of them even might take the side of the narcissist. The narcissist is doing whatever they can for their spectacle to be believed for the sake of their emotional management, so much as so they will do and say almost anything.

For them, it is rarely about truth and almost always about their audience’s perception.

In this way, they receive the false validation that they are righteous and good and that you are wrong and evil. Their sense of self-esteem can now be restored and their feelings of inadequacy and shame are managed. So it’s all fine and dandy.

Except for those on the receiving end – but who cares about them, right?

This method is often used in highly conflicted family situations involving a family member who is narcissistic but it can also happen among other social circles outside the family setting.

Often the goal for the narcissist is to find a scapegoat.