Therapy for NPD and Narcissists 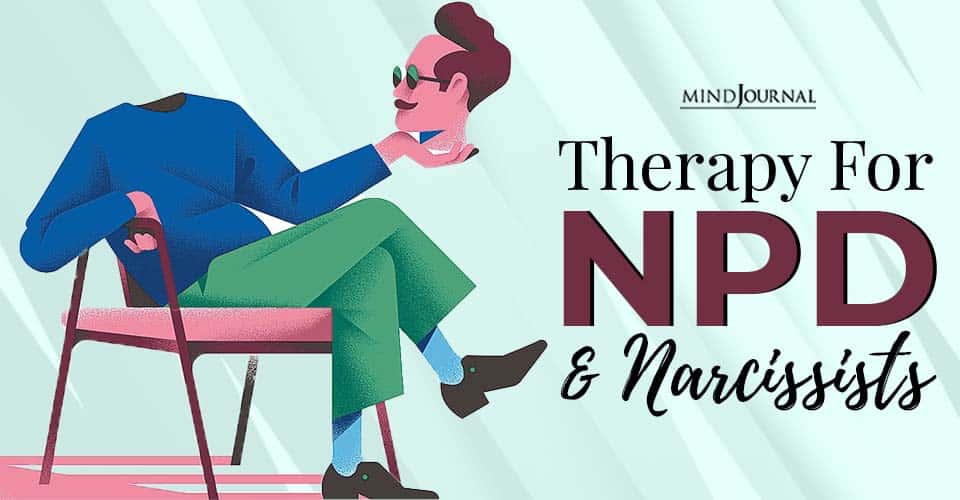 Many people ask whether narcissists or those with NPD (Narcissistic Personality Disorder) can change or benefit from therapy. Narcissists see the cause of their problems as external due to their defenses of denial, distortion, and projection, their ability to look at themselves introspectively is limited. Thus, they don’t often come to individual therapy.

Narcissists only comprise 2-16 percent of therapy clients (McClean, 2007). When they seek treatment, it’s usually to manage an external problem, such as a divorce or work-related issue, or following a major blow to their fragile self. Sometimes, they come because their spouse insisted on conjoint counseling, and occasionally, they seek treatment for loneliness and depression. Medication is sometimes used to treat their depression but isn’t effective to treat narcissistic personality disorder (NPD.) But treatment can help.

Many therapists believe depth work should be avoided not only because the narcissists don’t believe their difficulties are a problem or due to themselves, but also because they need to strengthen their defenses against primitive feelings (Russell, 1985).

One client who entered therapy during a tumultuous divorce soon quit. Self-examination tarnished his self-image, and he claimed lowered his self-esteem. He complained that he needed a drink to get through each session and also resented the analyst’s fees. He felt they were exploitative, “typical of women,” including his soon-to-be ex-wife. (In fact, they were very high, but not atypical for NYC.)

The foregoing example also demonstrates how much care must be exercised by the therapist, who should be trained and experienced in working with narcissists. Though they appear strong, they have fragile egos that are easily wounded. When that happens, like this client, they will leave and are unlikely to try therapy again.

Although narcissism is difficult to treat, progress can be made over time. Even weekly sessions over a shorter term can yield benefits. Patients’ functioning and adaptation to reality can improve through gaining some control over their defenses and by working through past trauma (Masterson, 2004). They can learn to manage their anger, rage, and impulsivity.

Although narcissists may feign empathy in order to get close or win others’ approval, subclinical narcissists (without full-blown NPD) have been taught empathy by using their imagination to put themselves in another’s shoes (Hepper, Hart, & Sedikides, 2014). Narcissists who are philanthropists or volunteers in the community for the public approbation to boost their self-esteem can learn to empathize and be less self-centered by helping others without personal gain.

Psychoanalysis and psychoanalytic psychotherapy are generally used for treating the disorder itself. Treatment of two or more times per week centers on activating the patient’s grandiose self. By empathic mirroring, a “transmuting internalization” occurs, whereby the client internalizes the therapist positive, caring attitude, which creates healthier internal psychic structures.

When the patient develops an idealizing transference, attributing perfection to the analyst, it’s in order to use him or her for stability, calmness, and comfort (Russell, 1985). Understanding the dynamics of projective-identification of these states is key in working with transference and countertransference (Lancer, 2013).

In comparing Kohut and Carl Rogers, psychoanalyst Robert Stolorow described the therapist’s empathic stance in client-centered therapy: “The client thus comes to experience himself as ‘prized’ by the therapist, much as does the narcissistically disturbed patient immersed in a mirror transference” (Stolorow, 1976, p. 29).

“The therapist endeavours to keep himself out as a separate person . . . his whole endeavour is to understand the other so completely that he becomes almost an alter ego of the client . . . The whole relationship is composed of the self of the client, the counselor being depersonalized for the purposes of therapy into being ‘the client’s other self.’ (Rogers, 1951, pp. 42, 208) ”

Kohut believed that the analyst should neither interpret transferences, nor defenses, including rage at the analyst who fails to live up to the patient’s expectations or satisfy his or her needs.