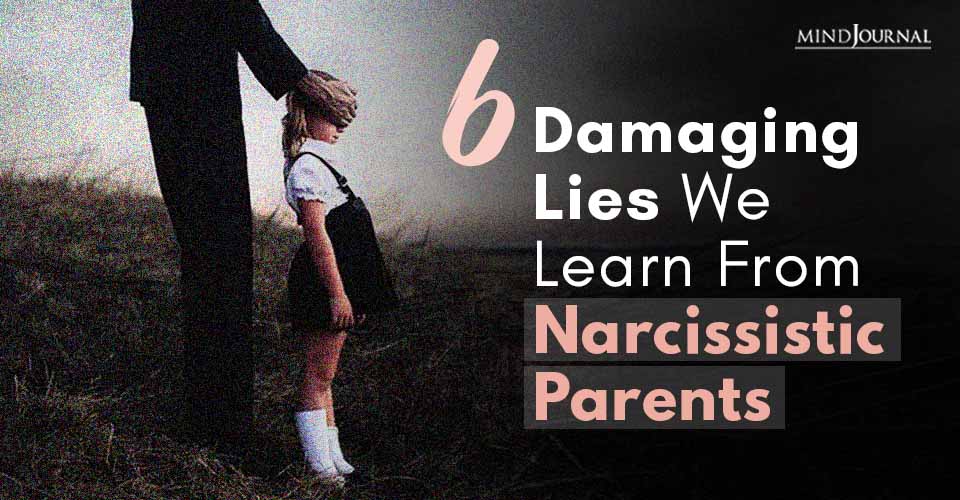 Many children have the misfortune of being subjected to damaging and mentally torturous lies from their toxic and narcissistic parents.

Narcissistic parents engage in twisting reality to meet their needs which misfires to hamper their children in the long run.

Recently in a conversation with my mother, I asked her what love means to her. I remember her sitting inside the slightly darkened cafe we had rushed into, to escape the deadly Indian summer heat, for quite a while before answering.

When she finally did, this is what she said : “When you put someone else before yourself, that’s love.”

It has stuck to my conscious mind and now that, narcissism is the central point of this piece, it’s coming back to me with a greater impact.

People with narcissistic personality disorder are often self-absorbed, self-fulfilling, and exhibits such a self-obsession at the cost of others, that the world around them often crumbles.

The behavior is often exacerbated when such a person becomes a parent. A narcissistic parent often sends their child into a volley of psychological issues that stem essentially from the chaos of not knowing what’s true and what they can believe in.

An unsafe, conditional relationship between such a parent and their child leads to long-term reverberations for the latter, as they grow up and begin to integrate themselves with the world.

What’s perhaps most damaging about a child (and even those who have outgrown that developmental stage) who’s caught in a narcissistic equation, is the perception they develop about themselves. For the fact is that most of what they are told and made to believe come from a narrowed understanding and experience for the narcissistic parent.

And if you’re wondering what the most common ones are, here’s a list.

Here Are 6 Damaging Lies We Learn From Narcissistic Parents

In a healthy parent-child relationship scenario, the parent plays the part of instilling self-love and self-worth in the child.

In a relationship where the parent is narcissistic, this aspect goes largely missing, for the simple reason that such parents are incapable of emotional holding or connection. Power and attention are all that they are interested in.

This means that they can send across the “you’re not good enough” message both subtly and loudly. Either way, the child feels like they lack worth inherently and can never match up to anyone, let alone chase their dreams. The message can play out where the parent pits the child against their friends, their siblings, or even children seen on TV shows.

The expectations set are unrealistic and the child is somehow made to believe that these standards are natural and that they should meet them to earn the minimum recognition in their parent’s eyes.

Related: 30 Ways In Which Narcissistic Parenting Affects A Child

2. “You’re not supposed to feel what you feel.”

Power and feeling powerful are two themes constantly running in a narcissist’s life.

So, even as a parent, such a person focuses on voicing their needs and valuing their own opinions. Even if they come at the cost of the individuality that should ideally develop in their child.

Narcissists have a way of quietening down feelings that are not their own and making their children feel guilty of any emotion or feeling that they don’t approve of.

This voicelessness spreads in time and as the child grows, they might believe increasingly that what they feel is not valid.

Continuing with the power theme, narcissism also has roots in competition.

Or shall we say, unhealthy competition?

For we all know that competition by itself isn’t a terrible thing. If one has to be in the game (equate that with life, education, work, sport, etc.), one has to be able to compete. But what makes competition an almost destructive word when viewed as narcissism, is its power to put the focus on the competition rather than the game.

This means that a narcissistic parent will pit one sibling against another, trigger their child to compete against friends (even if that means underhanded means).

These parents end up sending the message that manipulation is “cool” and must be resorted to if all other means to winning fail.