Yes, Narcissists Can Change: Here’s How 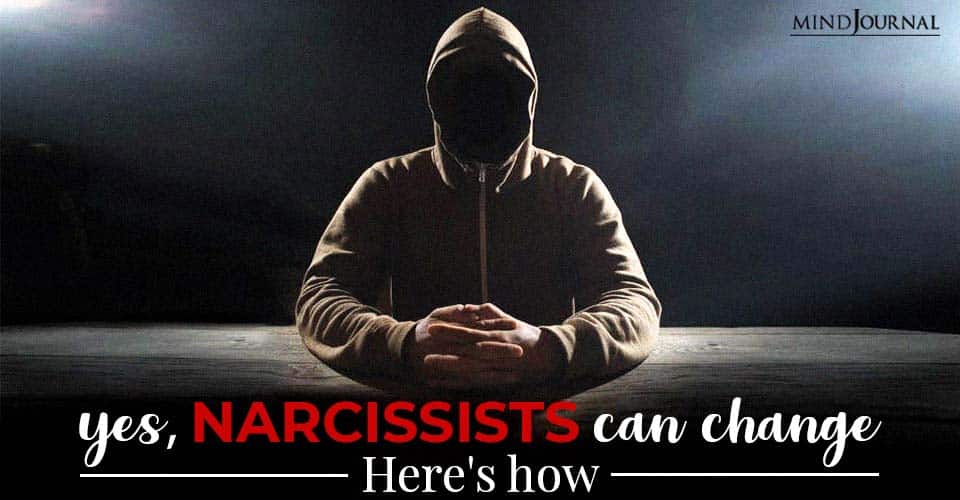 Contrary to popular belief, narcissists can change. They cannot change or heal their narcissism, but they can (and do) change their behavior.

Now, don’t misunderstand this. The motivation is always a selfish and internal one. It has nothing to do with other people, which is why appealing to a narcissist generally will not work. Telling them how much they are hurting you or upsetting you does not sway them. It means nothing to them, in practical terms. They’re just words and typically are interpreted as blame which they connect to shame.

Remorse is felt for other people, and narcissists are not capable of remorse because it is connected to empathy, which they generally don’t have.

Shame, however, especially pathological, unreasonable shame, is an old enemy of the narcissist. It triggers rage in them and puts them on the defensive. Now there’s a fight, and an angry narcissist is impossible to get through to. Their disorder specifically prevents this, regardless of what you say or how you say it. So remember: narcissists don’t care about your feelings at all. They only care about theirs.

Using logic won’t work either, because narcissists believe their feelings are facts. This is illogical and unreasonable, but it is how they operate and you cannot reason with it. There is nothing you can do to create or motivate a change within the narcissist.

The narcissist will only change their behavior on their terms, and for their reasons, no one else.

Related: Are Narcissists Evil? Or Are They Just Helpless?

Another big part of the problem is that many of the narcissist’s behaviors are deeply-ingrained habits and patterns. They gave themselves permission years ago to act the way they do, and this permission was reinforced by enablers around them. In this way, they are like children: if the behavior is rewarded, it will be repeated.

Narcissists that throw fits or become violent have likely been that way their entire lives. It’s what they do when they are upset. This behavior is second nature to them by now and it has been reinforced by the fact that it worked in whatever way they need it to work. Because this behavior has been reinforced and repeated for so long, it may no longer feel like a choice to them.

They may claim it “just happens” and that they are unable to control it. It isn’t that they can’t control their behavior, but that they don’t think before they act.

Narcissists simply react a lot of the time. They are impulsive and careless. Even when they seem to be planning schemes and manipulations, they are simply reacting to a need or want they have without thinking about the consequences of what they are doing. These things don’t matter. All that matters is need and want.

Because of their magical thinking, they believe it will all work out fine, and because of their denial, they are able to justify everything they do. This all takes place after their impulse though. It is a reaction to their reaction, so to speak.

As an example, a former client was married to a very physically-abusive narcissist. The narcissist claimed that he didn’t want to be violent because he didn’t want to be that kind of person (notice it had nothing to do with the pain he was causing his wife, only shame for himself), but that he couldn’t help himself because it was just a knee-jerk reaction that happened when he got upset.

The Little Shaman is a spiritual coach & specialist in narcissism. Helping others all over the world understand & heal  from abuse through the written word, podcasts and individual coaching. Learn more at littleshaman.orgView Author posts