Understanding Echoism: 14 Signs of an Echoist (The Opposite Of A Narcissist) 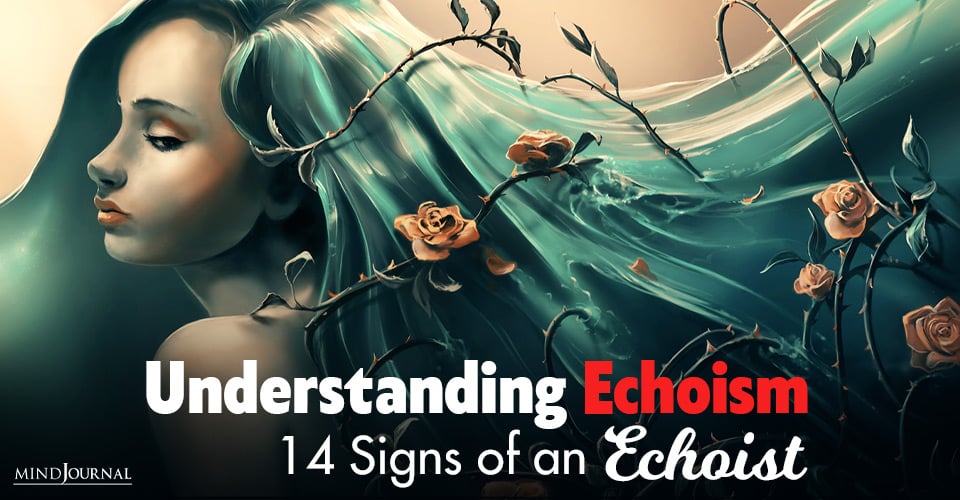 Are you afraid that others may think you are a narcissist? Would you rather stay silent than voice your opinions? Then you just may be an Echoist! Echoism is a newly coined term which is regarded as the exact opposite of narcissism. So are you an Echoist? Let’s find out.

Echoism, sometimes also known as an echo personality disorder (EPD), is a relatively new psychological concept and is regarded as a personality trait. Individuals with this trait tend to echo the needs, desires and emotions of others by sacrificing or overlooking their own feelings and needs. While narcissists are excessively concerned about themselves, echoists rarely think or worry about self. These people often become trapped in relationships with narcissists as they don’t like to flex their own rights and prefer focusing more on their dominant partners. People with this newly defined trait tend to be kind-hearted, benevolent, and selfless which can often be unhealthy for them. They are prone to serving others more than necessary while gaining almost nothing in return as they hate being a burden on others and becoming the center of attention.

Considered more as a survival strategy, this trait lies in the extreme end of the spectrum used to measure narcissism. One one end of the spectrum are people with narcissistic personality disorder (NPD), people who fall in the middle have acceptable or healthy degrees of narcissism, while on the far end are echoists who have a strong fear of being seen as a narcissist. Being modest and over-giving, they tend to attract and be vulnerable to narcissists, abusers and other toxic personalities like psychopaths. Clinical psychologist Perpetua Neo explains “Unfortunately, in obsessing over how not to be like the narcissist who is self-absorbed, the echoist is ironically also self-absorbed.” Although it may seem that echoism is a fancy word for being a people-pleaser, there is, in fact, a distinct difference between the two traits.

Read also: Why Narcissistic Abuse Syndrome Is The Wrong Word For Your Condition

The term echoism was introduced and popularized by clinical psychologist and author Craig Malkin, Ph.D. in his book ‘Rethinking Narcissism’. He claims that echoists fear feeling special or getting praise from others, regardless of how positive it may be, while narcissists thrive on being the center of attention. It is also believed that almost all of us possess this trait to some degree, however, when such feelings become “above average” and dominate our behavior, then we can be identified as an echoist.

The Myth Of Echo & Narcissus

The concept of narcissism and echoism originates from the ancient Greek myth about Narcissus and Echo. According to the myth from Ovid’s Metamorphoses, Echo was a mountain nymph who fell in love with the overly handsome hunter Narcissus. However, Narcissus rejected Echo’s romantic advances and eventually fell in love with his own image when he saw his reflection in a pool of water. Narcissus later killed himself as he could not possess the object of his desire. However, Echo’s life was no less tragic. Echo was cursed by Goddess Hera to repeat the last words ever spoken to her. When Echo fell in love with Narcissus, she could not express her love for him and silently witnessed as Narcissus fell in love with himself. The cursed Echo could then only ‘echo’ Narcissus.

As the handsome hunter never loved her and loved only himself, the love-struck nymph mirrored his behavior and could love only Narcissus but never herself. She eventually died from grief after being rejected. Dr. Malkin coined the term echoism based on this myth of the nymph who could never voice her feelings and only echoed others. “Like their namesake, echoists definitely struggle to have a voice of their own,” he explains.

Read also: Narcissus And Echo: The Heartbreak of Relationships With Narcissists

This coping strategy may develop during childhood, usually among children with abusive or narcissistic parents. With years of childhood abuse, you may develop the tendency to care more about the narcissist in your life than yourself and prefer to shut your inner voice in order to survive. As you become an adult, these coping mechanisms can become a part of your personality making you mirror the same patterns in your adult relationships. As a result, you start to mirror and echo the needs, desires, opinions and emotions of your partner in a romantic relationship. During her research Donna Christina Savery, therapist and author of the book “Echoism: The Silenced Response to Narcissism,” found that most echoists tend to have a “parent with narcissism.” However, someone may also develop such traits if they grew up with a parent who had difficulty with emotional regulation.

Children with such parents may learn to care for and support their parents at an early age, making them ignore their own needs and wants. The trait may also be rooted in comparison and competition from negative siblings or relatives. When a child is raised in a toxic or dysfunctional family, they may desperately avoid being the center of attention and have difficulty with praise. This can also result in unhealthy behaviors like self-sabotage. Moreover, she also observed that people with echoistic traits pursue relationships with narcissistic partners. They also tend to have what she calls “echoistic narcissistic complex.”

According to Dr. Craig Malkin, echoists tend to have a higher degree of emotional sensitivity. He believes that as they can feel deeply, they tend to develop echoism when exposed to abuse, shame, neglect, negativity and criticism from parents or caregivers. He believes that extreme echoists are “so afraid expressing their needs will cost them love that they lose touch with their own desires.” Dr. Malkin believes that when parents reprimand and punish children who are “temperamentally sensitive,” especially when they seek attention and admiration, children can develop echoistic traits. “Most often, it’s narcissistic parents who push their children in this direction,” he adds. However, Malkin claims that such personality traits are not based on passive behaviors. “Echoists can be terrific listeners, but they’re less comfortable opening up to others (their fear of becoming a burden often blocks their ability to share),” he adds. They can be rather active in pursuing the needs of others but never bother others about their own needs. He also found that both men and women develop this trait equally, however, women may be more likely to be echoists than men.