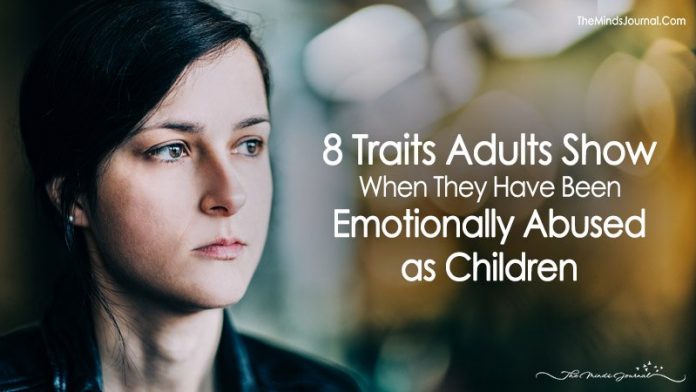 Childhood is one of the most sensitive phases of our lives. Anything that happens in childhood contributes to shaping our behavior, our choices and makes us what we are. Be it a criminal or a leader, each and every person will have the past which has played a direct role in developing their personality, their dreams, their outlook towards life.

A lot of people are abused emotionally in childhood which forced them to devalue themselves, lose their confidence and even lead to serious mental health issues.

We cannot undo these abuses but talking about these issues and spreading awareness might help people prevent such actions. We need to understand that children who face emotional abuse still bear those marks as adults which affect their lives along with those of their peers too.

This is detrimental to the development of a healthy society.

Here is a list of things which adults do if they have been emotionally abused as children. Let’s understand them:

(2) The person has a problem in expressing their opinion.

As an adult, this fear syndrome will persist and the adult will not express their own opinion which could have added value to the discussion.

(3) Accepting the fact that one is loved unconditionally is very hard for the adult.

The adult will always remain skeptical of the love because as a child, they have been betrayed and they have always been devalued. This not only has affected their self-confidence but also took away their trust on people.

An adult who has gone through such situation will not trust a person completely and hide in their own shell. They will not have faith in life and love and in their attempts to hide their vulnerability, they will live in their only corner.

(4) The adult will keep on explaining their actions even for simplest of things.

It arises from situations where the child has to be answerable for each and everything they did.

When the same child grows up, they will live in the fear of being distrusted or scolded, lacking faith in their ability to trust on their own judgments and will also be unable to take decisions.

(5) A child who has been abused will be a very shy adult.

Years of ignorance will lead to the belief that nobody wants to listen to them. They will try their best not to open up and will dwell in the belief that they are unwanted. This leads to depression and other mental health issues.

(6) The adult will have trouble identifying oneself.

When a child is constantly abused, being told repeatedly what to do and what not to, being scolded, looked down upon, the child fails to understand what is there good in them and eventually when it comes to the building of one’s identity, they fail. The uniqueness of a person lies in their identity. How can a child develop a unique identity when their actions and choices are constantly determined by others and judged by others? They lose their creativity and talent and as adults, get lost in the crowd, suffering from identity crisis, confused about themselves.

(7) Growing up as a child who had to hear, ‘you are responsible for this,’ sort of blames, an adult will have the tendency to blame oneself always.

It has always been the same for the adult: getting blamed for each and everything in this world. This type of emotional abuse develops this idea in the person that it is absolutely normal that whatever bad happens, that person will get blamed for it. This has always been the reality; hence, the adult will believe in it, devaluating themselves, feeling bad about themselves, their existence.

Codependents’ reactive role amplifies their focus on their partner, while they hide who they are. They increasingly try to control the uncontrollable, sacrifice themselves, and try harder to please and be accepted.
Read more
wpDiscuz
5
0
Would love your thoughts, please comment.x
()
x
| Reply