Who Is A Ninja Narcissist: 7 Ninja Traits Of A Covert Introvert Narcissist 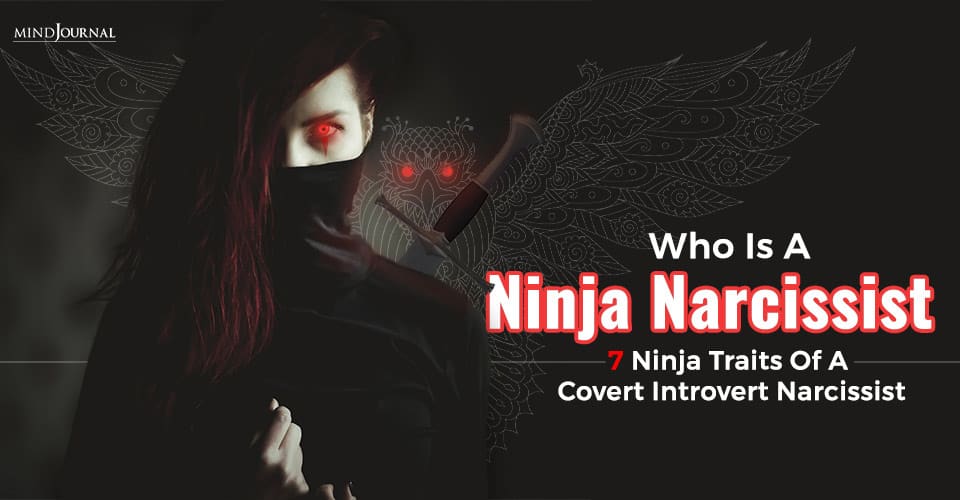 Narcissists are often easy to identify. But some may have “ninja level” narcissistic personality traits that make it easier for them to blend in and masquerade as “normal” people. A ninja narcissist refers to a covert introvert narcissist and here’s how you can spot one.

Who Is A Ninja Narcissist?

A ninja narcissist is someone who shows their narcissism in highly subtle, hidden, and camouflaged ways, like a ninja. Although they may appear modest and shy on the outside, they have a hidden narcissistic personality disorder and can cleverly mask their covert narcissistic behaviors and their sense of superiority and self-importance.

They are also known as covert introvert narcissists, closet narcissists, hypersensitive narcissists, and a vulnerable narcissist. They tend to lack self-confidence and empathy and desperately crave attention and admiration.

As ninja narcissists behave very differently from covert narcissists, you may not be able to identify them in your life. They tend to be highly inhibited in their behavior and approach, yet have the same effect as normal narcissists.

Professor, private coach and author Preston Ni M.S.B.A. explains “This subtype of narcissism is more hidden, and yet can carry the same self-conceit and negative contagion as their extroverted counterpart.” This is why it is crucial that you learn how to spot their ninja traits so that you see beyond their masks and protect yourself from their toxicity and negativity.

Related: What is a Covert Narcissist?

Traits Of A Covert Introvert Narcissist

Here are some of the most common traits of a ninja narcissist that can help you identify these elusive individuals who are secretly filled with hidden toxicity:

Related: Ninja Narcissists: How They Torment You With Their Sneak Attacks

Here are some of the most common, yet hard-to-notice ninja signs of a covert introvert narcissist which are mostly driven by their deeply ingrained insecurities.

1. They have a hidden superiority complex

Ninja narcissists have a latent sense of smugness and superiority. They can be highly judgmental and tend to closely observe people as they listen to them. Introverted narcissists would rather quietly analyze others than speak their minds or actions. This makes them feel superior to others which are often hinted at by their upsetting, unapproving body language and detachment.

When interacting, they may be judgmental and critical, appear bored, distracted, avoid eye contact, be inattentive and dismissive in their nonverbal gestures. “This seemingly impenetrable smugness is, of course, a front, covering a sense of vulnerability within. Part of the insecurity may be the inability to relate to people meaningfully as human beings,” adds Preston Ni.

2. They are hypersensitive to criticism

A poor sense of self-esteem and insecurity are the basics of narcissistic personality disorder (NPD). For ninja narcissists, their insecurities may surface as high sensitivity towards criticism.

Although most of us don’t like to be criticized, a covert introvert narcissist may often react negatively and strongly to criticism. They can become dismissive, angry, or resort to sarcasm to show that it doesn’t affect them, even in the case of constructive criticism. However, they may feel humiliated, empty, mortified, or furious inside.

This is because criticism shatters their false and idealized beliefs about themselves and incites their deep-rooted insecurities.

Related: 16 Signs of Insecurity In A Narcissistic Person