Narcissism Driven By Insecurity: 16 Signs To Watch Out For 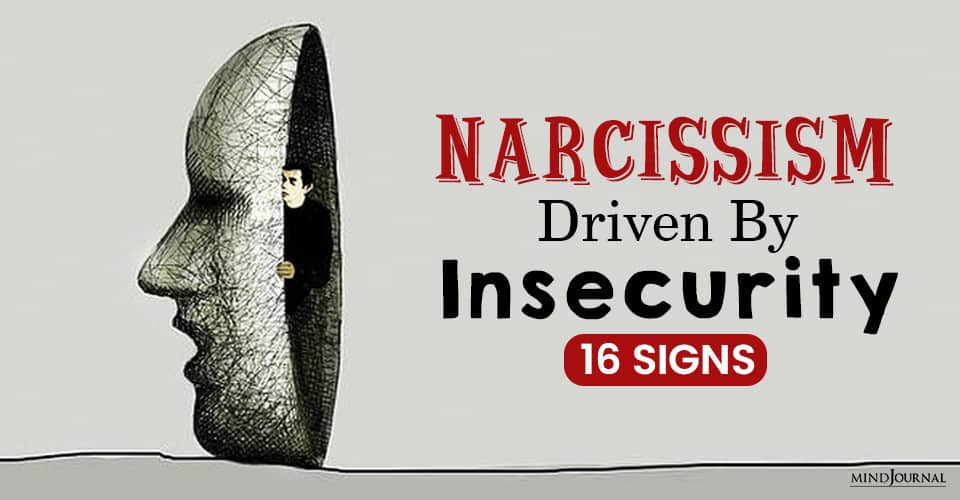 Do you feel insecure most of the time? Insecure people tend to lack self-confidence and low self-esteem which hampers their growth in life. They never feel accepted or safe leading to severe emotional exhaustion. Here are a few signs of insecurity that can slowly ruin your life.

How Insecurity Makes Us Feel

Most of us feel insecure at times. We often doubt ourselves, compare ourselves with others, and think that they are better than us. We feel vulnerable and unsafe. Yet we try our best to not show it in front of others. Most of the time we misunderstand our insecurities and either feel jealous of others or lose the confidence to do something with gusto.

However, there are some people who persistently feel insecure and live in constant fear. Health and wellness expert Caleb Backe says “Being somewhat insecure or a little jealous/paranoid is natural. We can be very possessive, sometimes without even meaning it… But this changes when you start acting on your insecurities.”

Insecure people fail to identify their anxiety, fear, and insecurities, they pretend to be overly confident and often become manipulative leading to narcissistic tendencies. Their manipulative efforts to cover up their insecurities only make them feel less loved, valued, and accepted – the exact opposite of what they actually desire.

In their effort to hide their insecurities, insecure people often act fake and pretend to be highly confident and secure individuals. But behind their assertive demeanor lies warning signs of insecurity which stare blankly at their faces. So they feign confidence and instead make others feel insecure and inferior. This is known as inferiority complex, theorized by Viennese psychoanalyst Alfred Adler.

Susan Krauss Whitbourne, Ph.D., author and Professor Emerita of Psychological and Brain Sciences at the University of Massachusetts Amherst, explains “According to Adler, people who feel inferior go about their days overcompensating through what he called ‘striving for superiority’.”

These individuals, who constantly feel uncertain inside their minds, can only experience happiness by “making others decidedly unhappy.” For Adler, this intense urge to feel superior is based at the core of neurosis.

Many experts believe that the signs of insecurity may hint towards narcissistic personality disorder. Narcissists are persistently focused on looking for ways to boost their brittle ego and lift their feeble self-esteem. Their need for constant attention, reassurance, validation, and admiration and their pretentiousness can even affect their social reputation and relationships. They are driven to make others feel inferior in order to make themselves feel superior due to their low self-esteem and narcissistic traits.

Most people try to hide their signs of insecurity and pretend to be someone they are not. They pretend to be someone they believe others will like, respect, value, and admire. They start believing the mantra “Fake it till you make it.” But in this process, they lose something truly valuable – their authentic self. “The problem is, while we might think we’re managing and hiding our insecurities most of the time, the people around us sense them all of the time,” explains best-selling author Tamara Star.