The Anxious Lover: Stop Feeling Insecure And Get The Love You Crave

I manipulated an ex-girlfriend once. Years ago, when I was in a toxic relationship with someone I loved, I lied to get a reaction out of her. I told her I was going to watch her soccer game, but I never showed. It was something very out of character for me to do.

When she confronted me on it, I told her I was busy talking with someone else. Even when I wasn’t. I mislead her to believe I was with another girl. She was devastated and hurt. She was sick to her stomach. I felt justified.

Throughout the year of our relationship, I always had the feeling that I was investing more into our relationship than she was. I never felt like a priority in her life. It felt like she had a secret life, and I wouldn’t be surprised if it turned out that she did. I wanted the security that she’d be with me, but she never seemed to care enough to give me the reassurance in the way I needed it.

I didn’t trust her, but I was obsessed. So I lied because I wanted her to feel the same way I felt. I felt neglected. Confused. Sick to my stomach.

I lied to prove that she cared about me. My lying to her proved that she did. But it also created an argument that ended our relationship forever. So why did I do it?

Our relationship was a classic toxic relationship. Something would happen in my life and I’d seek closeness to her. She would reject me. She would tell me I was “too needy” or “too sensitive.” Her need for distance would push me away during the times I needed reassurance. Like all toxic relationships, this only amplified my anxiety and insecurity. 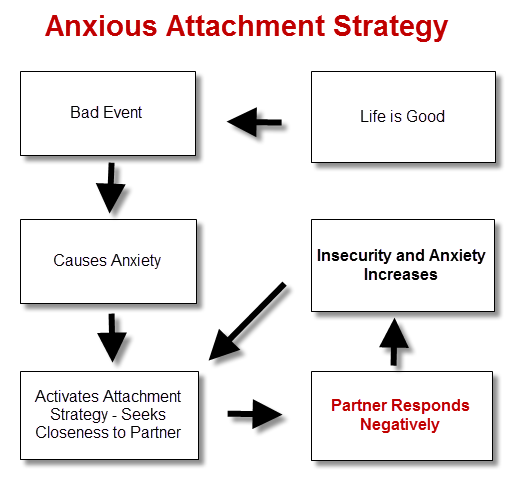 So I would behave in batshit crazy ways to reconnect with her. I would do anything and everything I could to get the reassurance I wanted in the relationship. This only caused her to push me away even farther, neglecting my needs.

Extensive research on intimate relationships have shown that people behave in very predictable ways when we are in love. The toxic relationship I’m describing above is a typical avoidant and anxious relationship.

These types of relationships are full of ambiguity. The avoidant partner sends mixed signals about their commitment in the relationship. They may say they are committed, but their actions make you feel differently. You are left guessing. And every time you get a mixed message, like me, you become preoccupied with the relationship.

Even though you know it’s not healthy, you can’t seem to stop thinking about them. Friendships, hobbies, and career opportunities fall to the wayside.

Next thing you know, you’re doing the craziest things just to reconnect with them. Even if you know it’s unhealthy. This could be driving by their house or snooping through their phone.

We often seek relationships that confirm our self views and run away from those that don’t. Like many anxious lovers, I believed that I was too much for my lover. Below you can see how clear my relationship reinforces this.

Not such a healthy relationship, huh?

So why was I so obsessed with her? Why couldn’t I move on, even though I know I should?

Are you dealing with a past trauma that's negatively affecting your current relationship?
Read more
Romantic Relationship

Relationships are hard work sometimes, and there are a few red flags that you should watch out for if you don't want to get your heart shattered.
Read more