Narcissistic Fathers: The Dark Shadow They Cast From Childhood To Adulthood 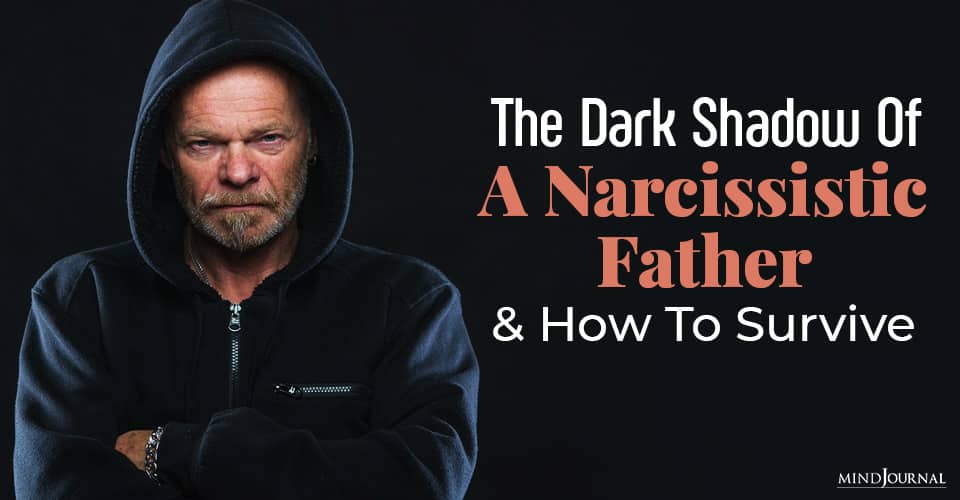 Do you live with a toxic, narcissistic father? Is this abusive relationship taking a serious toll on your mental and emotional wellbeing? If you are trying to cope with and recover from narcissistic abuse from your father, then you should know that healing is possible.

The relationship we share with our father is one of the most special and strongest bonds in our life. Their personality, attitude and behavior shapes our own personality and mindset. How loving and caring they are may strongly influence our own attachment styles. This is why most people with “Daddy Issues” often tend to be an emotional mess. When our fathers turns out to be a psychopathic narcissist, it can have long-term traumatic effects which can be severely devastating, both mentally and emotionally. It can adversely affect our adult relationships and negatively impact how we raise our own children. However, if you have been raised by a narcissistic dad, then there are certain things you can do to alleviate the negative effects of a toxic father and live a better life.

Read also: Self-Identifying as an Adult Child of Narcissistic Parents

Who Is A Narcissistic Father?

Narcissistic fathers are parents who suffer from narcissistic personality disorder (NPD), which causes an unhealthy craving for attention & admiration, feelings of excessive self-importance and a concerning lack of empathy. They are highly self-absorbed and have an unrealistic sense of superiority. They tend to be highly manipulative, negative, dictatorial, abusive and self-absorbed. They will always criticize their children unnecessarily and will never accept the blame even when they are wrong. Prone to lying pathologically, they can be extremely difficult to deal with, particularly because they refuse to see their own faults. A narcissistic father may have a strong need to control how his children see him as they tend to have low self-esteem. They believe that if they don’t lie, manipulate or control their own children, their insecurities and flaws will get exposed and they will be rejected as a parent. Due to their serious lack of empathy, they are usually incapable of raising children in a healthy way.

A father with narcissistic tendencies may have toxic attachment patterns and want to fulfil their own dreams through his children. They desperately try to control their children with manipulation, lies, abuse, punishments and even threats. A narcissistic father can become possessive and abusive with his children as he may feel intimidated by the growth and independence of the children. Not only do they disrespect the personal boundaries of the children, they also tend to have unrealistically high expectations from them. Their narcissistic behaviors can seriously affect their children’s psychological and emotional growth affecting their attitudes, personalities, reasoning, ethics and morals, attachment styles and social & decision making skills. As a result, the children naturally suffer well into their adulthood.

Read also: Being a Father Versus Being a Dad: 6 Important Differences

Signs Of A Narcissistic Father

Narcissistic parents can truly destroy the life of their children. It is a plague that many children are exposed to without having the knowledge of how to cope with it. Children are made to feel that they don’t deserve any love, admiration, approval or respect. Instead of focusing on children, a narcissistic father only focuses on themselves and in turn blames the children for their own problems and faults. This is why it is crucial to identify toxic fathers as it is the very first step towards dealing with them and starting your journey towards healing.

Narcissism stems from Narcissistic Personality Disorder (NPD) which is characterized by:

Here are a few common signs which you need to be aware of to realize that your father is a narcissist:

Read also: 19 Signs You Were Raised By a Narcissistic Mother or Father

If you have a narcissistic father then they never cared about your needs and emotions. You felt empty, unsatisfied, upset and manipulated. Even as an adult, you don’t feel you are good enough to be loved or deserve to be happy.