Narcissist Mirroring: How Narcissist Manipulates You Into Loving Them 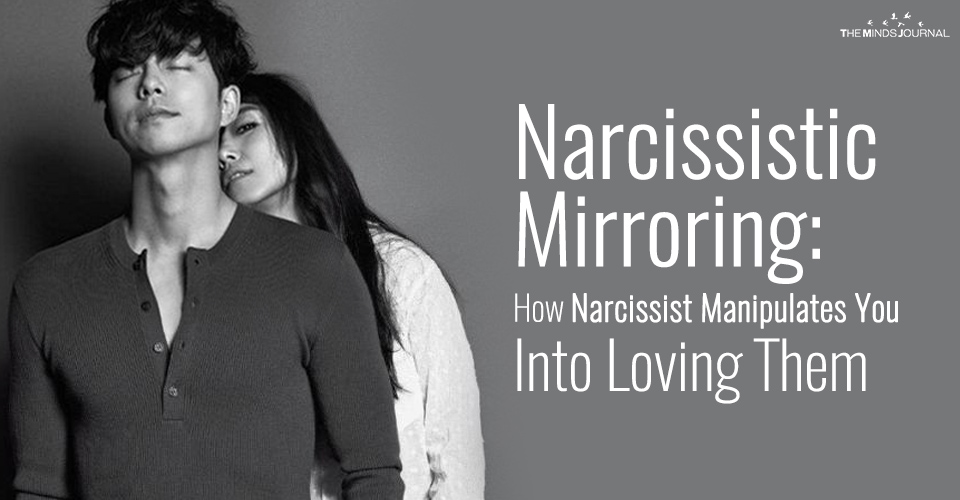 Narcissist mirroring is so manipulative they fool you into loving them.

They study you, then put on the perfect mask that mirrors your desires and dreams.

They become the fantasy partner, but it’s You you’ve fallen in love with.

When I first met my ex, it was as if he were magnetized.
He hadn’t spoken a word.
All he had to do was to look across the room at me with his big baby blue eyes and I was a goner.
There was something about him and I was drawn to him.
I can’t describe how powerful that feeling was.
Butterflies went on a rampage in my stomach.

He’s The One!
You can’t explain it, it just feels right.
Many of you say the same.
You were swept off your feet.
The relationship moved at an incredible pace.
It was a whirlwind romance.

What makes a narcissist or abusive type so attractive to some of us?

Narcissists are the ultimate manipulators.

Before they’ve met you or in the first minutes of your meeting they study you.

They observe everything about you and have the ability to read you fast.
What your passions are.
What excites you.
What you crave in your life or what’s missing from it.

Then they morph into that person and embody everything you want them to be.

They put the perfect mask on and mirror your desires and dreams, your hopes and beliefs back to you.

Wow!
This person is amazing.
I’ve never met anybody like them.

I thought that when I first met my ex.

The connection felt so deep and rapid.

Narcissists lack a form of empathy.

They have the basic impulses we all have.

The basic emotions and feelings such as fear or anger.

But they lack the sophisticated feelings, that rational side that most people have.

For example, most of us can temper anger with the rational adult logical side of us that says that this base impulse is not great to let get out of control.

We can see a disaster on television and feel empathy and sadness for the victims as we can feel other people’s pain.

They can’t feel them in the same way.

This what is known as emotional empathy.

But they can see it in other people.

They can read this reaction, even if it’s not innate to them.

In fact, they make up for this lack with a brilliant ability to read others and mimic this behavior.

They know exactly which mask is required depending on the person or the situation.

And they can wear a lot of different masks at the same time.

When you first meet a narcissist and you express feelings about things, have opinions about things or love a certain food or music, they’ll mimic that.

Suddenly they will talk like you, love the same things you do, feel the same passionate beliefs about the things that you do.

That is narcissist mirroring.

What they’ve read and observed and studied about you they reflect back to you.

Essentially what’s happening when they love-bomb you, in the beginning, is you’re falling in love with yourself.

I know that sounds weird.

But you are falling in love with a mirrored version.

That’s why it feels amazing.

It feels right and so good.

They will keep doing that as long as it takes to hook you in.

And entangle you into the relationship.

They’ll keep love-bombing you and making you feel amazing within yourself.

They keep acting the part of the perfect partner.

As long as it takes for you to be really enmeshed in that relationship.

If you at any point are still questioning their bad behavior when they let that mask slip for a second – which they do at the start – then whoosh! the mask will come back up and they’ll reel you in again.

That mask will stay on until they know they really have you.

If you are somebody who immediately sees through them and calls out that that behavior is unacceptable and put boundaries in place, they’ll probably disappear.

They’ll read the signal that you are somebody they can’t manipulate.

They need someone they can manipulate, whom they can use you as a source of supply.

What I mean by supply is they are looking for someone who will supply things that make them feel great about themselves.

Inherently, they don’t feel good about themselves inside, as, despite the bravado and grandiose sense of self-importance, they are deeply insecure.

So, they look to you for things like status. Do you have an apartment they can quickly move into? Do you have money they can tap into?

That sort of thing.

They give you this hard luck story:

I’ve fallen on hard times.
I do have money, I just can’t access at the moment.
I’ll pay you all back.

You know, that sort of story.

You might be really attractive and look good on their arm which gives them social status.

But they can’t keep that mask up for very long because they don’t have the ability to really feel these feelings.

They’ll compulsively lie to you and others and they can’t remember all the lies they tell and to whom.

So, at some point, the mirroring will stop.

And then you go in search of that person you first saw.

You wonder where that perfect partner has gone, so you keep looking for them and as time goes on it becomes a desperate and futile search.

They’ll blame you for that mirror shattering.

I got angry because you provoked me.

It will be your fault the mask has dropped.

But you’re not to blame.

We need to see them – not as that fantasy perfect partner – the dream person they’ve reflected back to you – but the real them.

The one who remains after the mask has slipped, when they start to show you the real them.

It’s not just intimate partners who might wear narcissistic masks.

It could be your boss or colleague at work.

Don’t be fooled by a mirror that actually is a reflection of you and your hopes, dreams, and desires.

If they cannot be part of those in the sense that they are not somebody who is aligned to who you truly are – your goals, your passions, your beliefs, and your core values – then let them go.

Don’t cling on to a fantasy of somebody they really aren’t.

Don’t waste your energy and time changing everything externally to try and fix something that’s not working to try and get that fantasy back.

It’s a fantasy, a reflection.

Understand what mirroring is.

If you’re not in a relationship and you’re first dating, please bear mirroring in mind.

Or even in the workplace or life in general, as mirroring is also a clever sales technique.

It can be used as a marketing technique, mirroring your desires back to you to persuade you to buy.

When it comes to dating, the same can apply.

A narcissist packages him or herself up into everything that’s going to fulfill your desires and dreams.

But remember, mirroring is a manipulative tactic.

The old mantra is a good one:

If it’s too good to be true, then it probably is.

If it’s too much too soon, then heed the warning signs.

Don’t listen to what they say.

They’ll talk the talk as smooth as silk.

Observe them as they do you.

Consider them as you would a new job or a product you want to buy.
Do they meet certain criteria that fit nicely with your core values, beliefs, standards and goals in life?
Are they nice?
Do they treat the staff in this cafe with the same respect you would?
Do they have the same sense of humor?
Do they believe in the same things about politics as I do?

Almost treat it like a job interview.
What are those core values that you have that are intrinsic to who you are?

Instead of listening to all those dream-like things they mirror up to you as some sort of fantasy, have your own checklist of the things that are important to you.

Instead of projecting onto them the dream of what you hope come true one day in the future, judge them against who they are now.

Most importantly, on how they behave.

Does their walk match their talk?

If not, then accept this date hasn’t worked out, they’re not good enough for you.

Go and find somebody else who is.

See mirroring for what it is and the red flags for what they are too.

A warning sign that this mirror will crack sometime in the future.

As they bask you in the sunshine at the start, don’t get hypnotized by them.

If it feels magnetic when you first meet them and you feel strangely pulled towards them, try to break free while you can.

The further you get reeled in, the harder it will be to leave.

Narcissist manipulation is a powerful tool.

Mirroring is just one of them.

Loving a narcissist is a lot like loving a false version of yourself. They observe you and reflect back what you say and do to create a fake connection. They will mimic your energy, expressions and tone to trap you in their grotesque maze of lies and deceit.