Breaking up hurts. Rejection on any level sucks, no matter how you slice it. But, breaking up with a Narcissist is not your average break up.

Most people recognize that relationships end for all sorts of reasons. Some are nasty, some are amicable and some are mutual. But they generally follow the same pattern – relationship ends, one or both parties grieve and then move on.

Getting over a relationship with a Narcissist is a much different kettle of fish. Depending upon the duration, the impact of such a union could have profound emotional, psychological, spiritual, physical and even financial effects on its victims.

Related: 5 Devious Things Narcissists Do to Keep You Hanging Around

Once a partner does manage to break free and gain the much needed emotional and physical distance, either by choice, necessity or abandonment, they are often left with some devastatingly painful questions like – Did he ever love me? Did I mean anything to him at all? 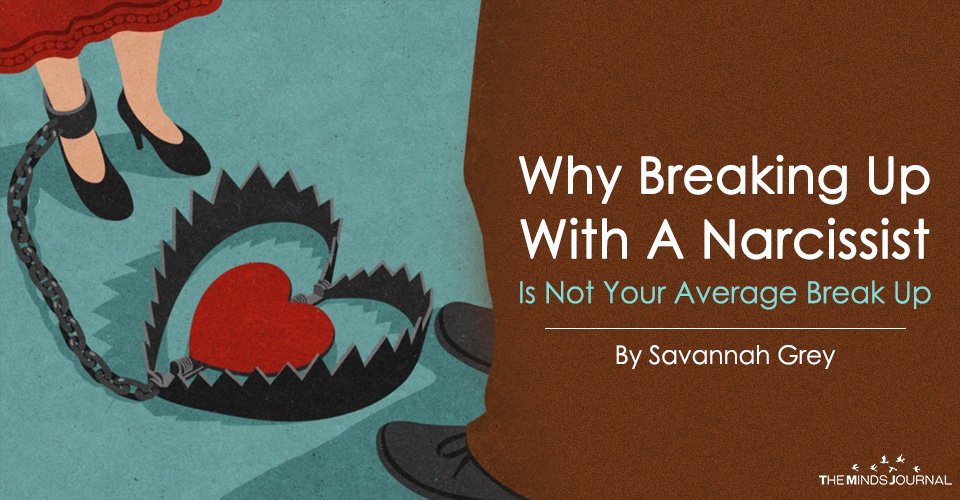 What one must always remember is that Narcissists do not love. They do not form normal, healthy, attachment bonds to anyone. To a Narcissist, their partners are objects, a source of supply, nothing more. And coming to terms with the fact, that you meant nothing, to someone who meant so much to you, is incredibly painful. Realizing that you were lied to, duped, conned and manipulated all along, is enough to send even a saint into a psychotic rage.

Related: What It Means When a Narcissist Says “I Love You”

I think the hardest thing to get over is the deliberate mind fuck, the psychological warfare that the Narcissist uses to keep his victims emotionally invested in him.

Narcissists are generally angry, miserable people and they love to project their misery onto those closest to them. Once the honeymoon phase is over and their true colours emerge, their victims are saddled with trying to understand what’s happening in the relationship. Why are they pulling away? What did I do? Why is he treating me that way? Why are they ignoring me?

This kind of emotional torture is exasperated by the Narcissists hot and cold routine. The mixed signals of I love you one day and hate you the next has women and men not only questioning their sanity but their sense of self-worth as well. They are pathological liars and will lie about even the most insignificant things. If their partner catches them in a lie, they will often, either spin another set of lies or fly into a Narcissistic Rage and even put the blame on you, to keep you off balance.

They use a form of psychological intimidation, called Gas Lighting, where they present false information to their victims, which makes them doubt their own memory, perception and even sanity. They will often say something, then sometimes even in the same conversation state that they didn’t say that to perpetuate the confusion.

Hey all I was with… Read more »