5 Devious Things Narcissists Do to Keep You Hanging Around 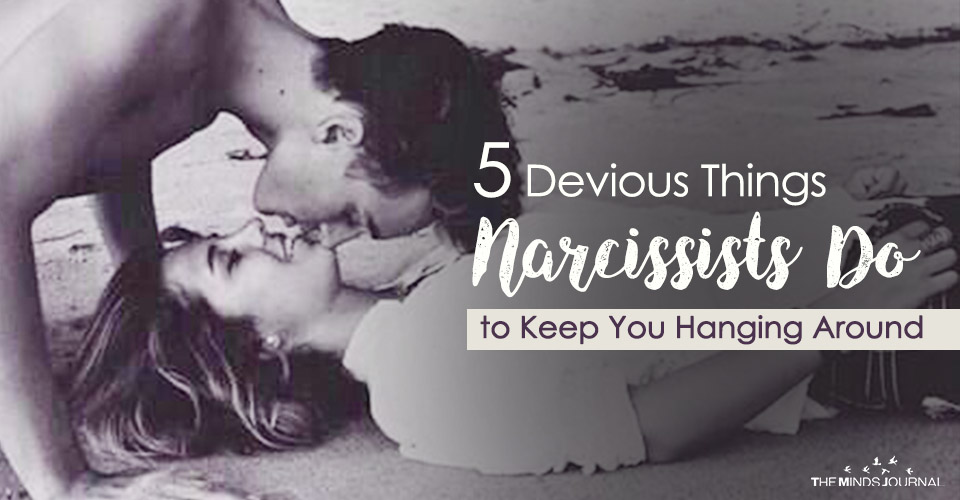 Devious Things Narcissists Do to Keep You Hanging Around

The word “narcissist” seems to be thrown around quite a bit lately, often referring to vanity and self-absorption, but that simply reduces it to a common quality pretty much everyone has and downplays symptoms of those who actually have the disorder.

People who meet the criteria for Narcissistic Personality Disorder tend to be extremely manipulative, particularly in romantic relationships, due to their lack of empathy and other issues. There are also quite a few weird things narcissists do in order to make sure that their victims never leave them.

As relationship problems usually tend to creep up slowly, it’s easy to miss red flags when interacting with these type of people, and before you know it, you find yourself in a relationship you really shouldn’t be in but somehow don’t seem to be able to get out of.

If you notice your partner doing these particularly devious things, he or she may be manipulating you in order to keep you hanging around.

Gaslight is a technique narcissists use to convince someone that their perception of the abuse is inaccurate. They’ll blame you for their own abuse, saying you have “issues,” that you’re “too sensitive,” and so on. They’re masters at making you doubt yourself, so don’t fall for it – hold your head up high and realize that you’re in a toxic relationship that likely needs to end.

2. When you stand up for yourself, you suddenly become their “everything”

As soon as you start to stand up for yourself, the narcissist will immediately change their tune about you. Suddenly you’re the sun, the moon, their everything, they can’t live without you. But soon after you decide to stay, things change back again.

Some people fall victim again and again, hoping that this time, it will be better, but that’s rarely, if ever, the case.

Once a relationship is comfortable, or the narcissist thinks you may be planning to leave, they’ll engage in smear tactics to try and depict you as an abuser or unstable person. They often hope that you’ll be pulled back into the drama of the relationship because you’ll be so concerned about reconciling rumors and repairing friendships.

4. They pull out all the stops in bed

Narcissists known how to be romantic and charming when they want to be, so when things seem to be falling apart, they use sex as a tool to impress, entrap, and manipulate.

The narcissist relies on jealousy as a powerful emotion that can cause you to compete for his or her affections, so provocative statements like “I wish you’d be more like her,” or “He wants me back into his life, I don’t know what to do” are designed to trigger the victim into competing and feeling insecure about his or her position in the narcissist’s life.

Unlike healthy relationships where jealousy is communicated and dealt with in a productive manner, the narcissist belittles the feelings of his or her partner, and often continues inappropriate flirtations without a second thought in order to keep you in check. That way, you’ll be less likely to focus on all those red flags.

Read 12 Signs You Are Being Psychologically Manipulated