Why I Don’t Want #RelationshipGoals 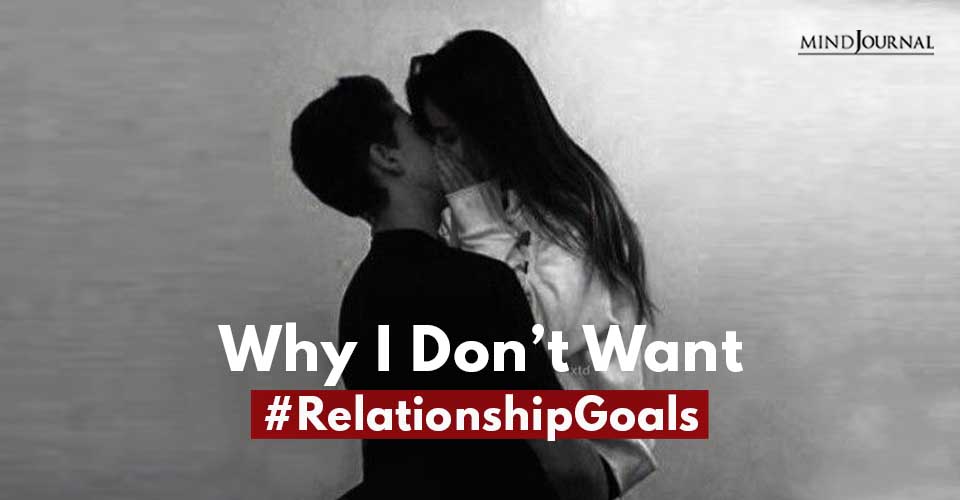 Wanting #RelationshipGoals is not always what love is about.

When I meet the right person I don’t want everyone to know about it at first.

I don’t care about being Instagram or Facebook official as long as we are our own definition of what is real.

I don’t need flowers sent to my office that I Snapchat immediately, showing everyone what a good boyfriend he is.

I just need to know he’s good to me and treats me well.

I don’t care if we follow each other on anything at all. Because I won’t need to like something to show I support him and all he does.

I don’t need him to comment on pictures I do post telling me I’m beautiful if that’s something he’s saying every day.

Needing validation through social media shows insecurity within myself and my relationship.

I don’t need to be texting him every minute of every day. I just need to be confident enough in him and us to know that I’m the only one he wants.

I don’t need a WCW to tell me he cares.

I don’t want social media to tell me what my relationship is.

I don’t need others to define it.

I just need to know it’s real for me.

Related: The Secret Ingredients To A Long Lasting Relationship

I don’t need to go pumpkin picking and take some basic picture when honestly I hate pumpkins.

I don’t need some picture by a tree in New York that will take up another picture in someone’s newsfeed.

I don’t want to be those people.

I don’t need some kiss at midnight to prove that the person standing next to me is the one I might want the rest of the year.

I don’t need some social media accessory to get a few more likes because the memories that matter most are the ones undocumented.

Those times where it’s late at night and I’m telling him things I haven’t even said out loud.

Those times where I love you slips out of my mouth and before I can take it back it’s his to have however he wants it.

Those times when the shit hits the fan and he’s the only one who can make it better as I fall apart in his arms.

Those times when I wake up in the darkness and his hand is the one I reach for.

Those times where I wake up late and there’s a note with some inside joke.

Those times where I nervously bring someone home for the first time because I haven’t done that. And he reaches for me telling me it’s okay.

Those time where he can read my body language and knows exactly what to say or do.

When the relationship is real I don’t need some filtered version of how it appears to be.

I need to know love is more than what we’ve made it out to be in a generation where the goal is to be in a relationship.

Related: 10 Signs of a Healthy Relationship

And when people look at me and say I’ve changed, the only relationship goal I need is someone who has made me change for the better.