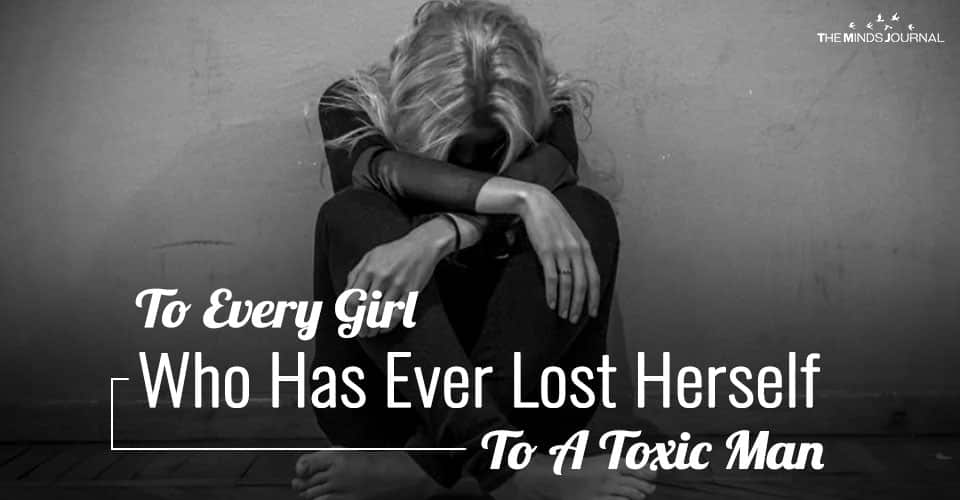 Being in a toxic and unhealthy relationship takes a lot from you, and there have been times when someone has lost herself to a toxic man.

Some days I wonder if I will ever fully be myself again, and unfortunately, those days seem to be happening more than I would like to admit.

I am ashamed to admit that I stayed in a relationship where I was fearful of the man I was with.

I dated someone who made me lose my self-worth.

I lost my smile that once lit up any room I walked into because he couldn’t stand to see me happy. My smile was a bother to him.

Once he charmed me into falling for his act he knew he had me hooked and he knew he could manipulate me. He knew he had me wrapped around his finger and he knew I wouldn’t leave. Because of him, I couldn’t even look at myself in the mirror anymore because he made me feel lower than I ever knew was possible.

I dated someone who made me lose my self-confidence

Because of him, I lost my self-confidence and my care-free attitude. I was the girl that ‘didn’t deserve to be told compliments because I didn’t need them.’ Because of him, I felt worthless.

Have you ever lost yourself and your self-confidence in a relationship? Read 12 Signs You Are Losing Yourself In Your Relationship

I dated someone I thought I knew.

I spent so much time convincing myself that he was going to go back to the man I had first met that I was completely oblivious to the fact that it was impossible. I so badly wanted to believe that it was all just a phase, but it wasn’t.

I dated someone who I didn’t even know who he was.

The man I first met wasn’t him; it was who he wanted to be perceived as. He turned out to be nothing but a liar and a cheater. I constantly made excuses for him and disregarded his wrongs.

I wanted him to so badly be the man he pretended to be that I became blind. And because of this, I made our relationship picture perfect on Instagram. I thought if I made it look perfect then it would be perfect.

Because of him, I lied to everyone that asked me how we were. I lied because I thought if I lied about it enough, it would become the truth. I deliberately chose to ignore all the signs because all I wanted to do was see the best in him.

I dated someone who made me question everyone.

I dated someone who was incapable of loving anyone but themselves.

I thought if I just brushed everything aside and loved him with everything in me, then it would make him love me back. It took forever to understand, but I now understand that it is impossible to make someone love you who only knows how to love themselves.

Because of him, I felt alone while being physically next to him. I was dating a man who refused to kiss me and refused to look at me. He made me feel unworthy every step of the way. No matter how many times I had a huge smile on my face and was excited to see him, I was never worth looking at.

I was dating someone who intentionally put me down so he could feel powerful. It was like a game to him – the worse he could make me feel, the better it made him feel.

Are you in a relationship with a man who is extremely self-obsessed? Read 6 Signs He Is Incapable Of Love

I was dating someone who was jealous of me.

Because of him, I stopped greeting everyone with a smile because he was jealous of the fact that so many people knew me and liked me. He made me feel guilty for being friendly. He said that ‘I was a whore’ for knowing so many people from the opposite gender. I convinced myself that I must really be a whore if he says I am one.

Have you ever experienced jealousy from your partner? Read 12 Signs That Will Help You Spot A Person Who Is Secretly Jealous Of You

I dated someone who had to put others down to build himself up.

He is the guy who jumped into a new relationship 4 days after we had broken up. I truly feel sorry for the girl he is with (and the girls after her) because he will continue making all the other girls feel the way he made me feel. He will never be happy with himself and the only way he knows how to fill the void within him, is by putting others down.

I dated someone who made me stronger.

Because it was in leaving him I learned to love myself again.

If you want to know more about how it feels to be lost to a toxic man, then you check out this video below: