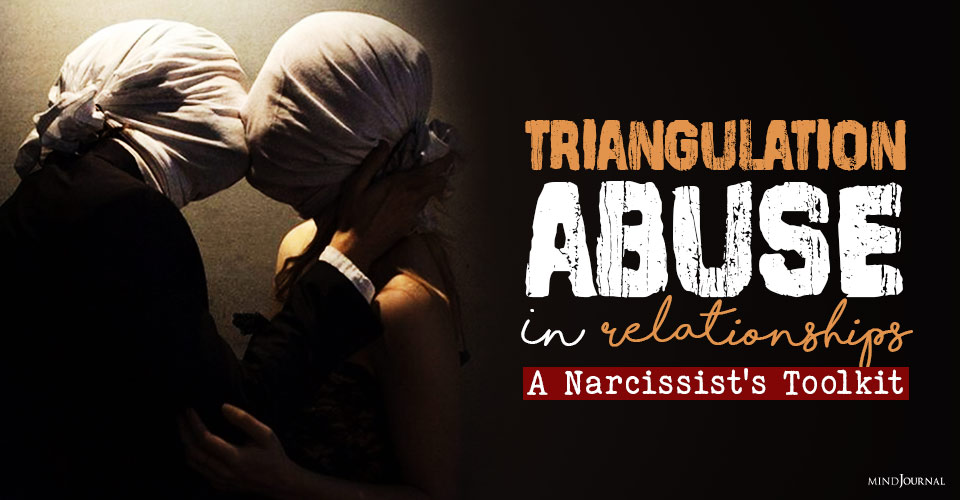 Triangulation abuse is commonly used by people with a narcissistic personality disorder or narcissistic tendencies to maintain control by manipulating others.

“Triangulation is the way the narcissist maintains control and keeps you in check – you’re so busy competing for his or her attention that you’re less likely to be focusing on the red flags within the relationship or looking for ways to get out of the relationship.” — Shahida Arabi

If you’re like me, you’ve encountered the triangulation term while researching the ins and outs of emotional abuse. It probably sounded a lot like something you’ve experienced, but you want some more information to be sure.

Well, if you’ve landed here, I’m going to go out on a limb and say you’ve been a target of an emotional abuser’s triangulation methods. But just to be sure, we’re going to dive into this topic to discuss what triangulation looks like in various scenarios.

What Is Triangulation In Relationships?

Triangulation is one tool in the emotional abuser’s toolkit. And it’s important to remember that it’s one of many. To create the triangulation effect, the abuser must create a triangle of sorts.

In the triangle, there’s you, the abuser, and at least one other person (or sometimes a pet).

To really understand this concept, think of this triangle as inverted. There are two points at the top and one at the bottom (the opposite of a typical triangle). To the emotionally abusive person, they are at the top of the triangle along with someone else. Spoiler alert: It’s not you.

But this is only for appearances. Oftentimes, abusers who rely on triangulation are narcissists. And to the narcissist, no one shares the top of the pyramid. At least, not really.

Related: Have You Been the Victim of Narcissistic Triangulation?

The Goal Of Triangulation Abuse

As with all types of emotional abuse, triangulation is a form of manipulation. The abuser wants the target to feel like they have to compete with another person for their attention, respect, and/or admiration.

You might be seeing the connection with narcissism here. What better way to feel on top of the world than to have people vying for your respect and attention? And what better way to control a target than to make them think it’s all a game they can “win?”

If you’re just realizing someone has used this technique on you, you might be waking up to the fact that all the drama in your relationship was well-orchestrated. This is a very tough pill to swallow for most of us. But don’t feel bad.

Triangulation often goes undetected, and there are a few reasons why.

1. We want to see the best in people – Many people who fall prey to an emotional abuser are empaths or Highly Sensitive People (HSP). We have trouble believing that anyone would intentionally hurt another. This isn’t true for all targets, so if you don’t think this applies to you, read on.

2. You may have a lean towards co-dependency – This is another tough pill to swallow, but if you truly want to learn and heal from this experience, you must look inward. Someone who is even slightly co-dependent is more likely to ignore warning signs (see #1) if there’s good in the relationship.

3. It’s all you’ve known — If you were born to an emotionally abusive parent, this is all you’ve ever known. And there’s a good chance you’re attracting relationships where you’ll suffer similar abusive tactics. That is until you learn that you’re the stable one and can move on to make healthier choices.

4. Triangulation is often super subtle – Especially, in the beginning, triangulation can be tough to detect. The person may say something that sounds off, but you brush it off and get on with your day. Even over time, depending on the person, triangulation can be subtle. You know this person’s words and actions trigger a reaction in you, but you think (or are led to believe) there’s something wrong with you.