Have You Been the Victim of Narcissistic Triangulation? 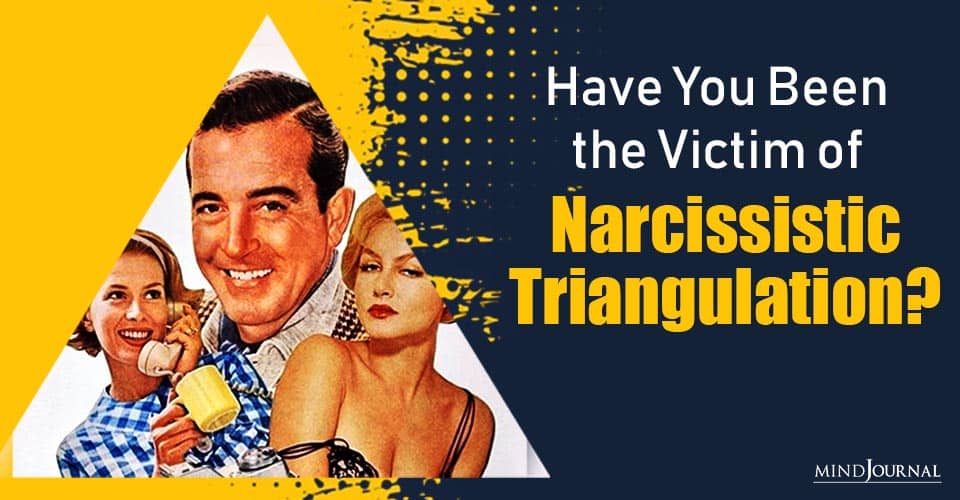 Written by: Elinor Greenberg, Ph.D., CGP.
Have You Been the Victim of Narcissistic Triangulation? What you need to know when a third person is added to your relationship.

I am often asked about the relationship between triangulation and narcissism.

People want to know: Why did my mate bring a third person into our relationship? What did he or she gain from making me feel insecure? Am I being manipulated? Is my mate a narcissist because he or she is always comparing me to someone else or finding some way to drive a wedge between me and my friends or family? Are narcissists the only ones who use triangulation to get their way?

Triangulation in psychology is the name for a rather heartless form of manipulation in which one person seeks to control a three-person interpersonal situation for their own benefit. It often involves the use of threats of exclusion or strategies that aim to divide and conquer.

Anyone can use triangulation, not just people with a narcissistic personality disorder. You can see children and adolescents do it in school and on playdates in, particularly obvious and hurtful ways.

In the cafeteria at lunchtime, she tells Lindsey in front of Betty, “Come sit by me. I saved you a seat,” while pointedly ignoring Betty. Betty stands there, waiting to be acknowledged. But Sara continues to ignore her. Lindsey takes a seat and follows Sara’s lead and ignores Betty.

Betty says, “What about me?”

Sara says, “Maybe I will sit with you next time.”

Sara used Lindsey to solidify her dominance in the group and portray herself as a prize to be fought over. This is an example of the use of exclusion combined with a divide-and-conquer strategy.

Related: The Triangular Theory of Love

Why do people with NPD use triangulation?

People who have narcissistic personality disorder frequently use triangulation to enhance their feelings of superiority, raise their self-esteem, devalue other people, and keep potential competitors off-balance. They are not really that different than the children who use it to help navigate the status wars in middle school or the teenagers who vie for popularity in high school.

Example: Jean has a closet narcissistic personality disorder. Unlike exhibitionist narcissists who love the spotlight and want to be the center of attention, people with the closet narcissistic subtype feel too exposed and vulnerable to openly seek attention. They find more indirect manipulative ways of feeling special. Their version of triangulation is less overt and more devious.

Jean envies her co-worker Carol’s success. She feels very competitive with Carol but is much too afraid to openly sabotage her. Instead, she befriends Fran, who likes Carol, and sets about subtly alienating her from Carol by causing trouble between them.

She says to Fran, “I know you like Carol, so I want you to know something. Please promise me that if I tell you, you won’t ever tell Carol I said anything.”

Fran is curious and promises not to mention their conversation to Carol.

Jean says, “I haven’t known how to tell you, but I am really uncomfortable about how Carol talks about you behind your back. I have been so shocked by some of the things she has been saying about you to the rest of the team. I stick up for you, of course, but I thought you should know.”

Related: 3 Dead Giveaways Of How Narcissists Act In Romantic Relationships

Jean killed two birds with one stone. In true divide-and-conquer style, she alienated Fran from Carol and also made Fran believe that she is her only true friend. In addition, Fran is now acting uneasy around the rest of her colleagues, and they have no idea why. They have started to avoid Fran, further cementing Fran’s need for Jean.

That is narcissistic triangulation.

People with borderline or schizoid personality disorders also may use triangulation for somewhat different reasons than narcissists do.